We woke this morning to the realization that this is our last day of homelessness and hours of fresh air.  Who knew we would have such mixed feelings about having a roof over our heads and a soft bed once again.  But reality is such and in just 33 or so miles our trip will be finished and it will all be just photos and memories.

We hopped out of bed to a chilly 48 degree day with clear skies inviting us to ride.  We stopped in the house to say goodbye to our hosts who were offering us breakfast and a bit more conversation.  So we were happy to sit with them and wait for the day to warm.  As the time passed nine we had no choice but to get moving, so we thanked  Jim and Cathy and headed out.

We stopped right down the road at the Dunkin’ Donuts for a bit more to eat (partly to satisfy a curiosity about the place) and consumed another half hour or so sitting in the sun and eating.  This would summarize our pattern for the day, lacking focus on our ride and spending more time enjoying crossing borders, eating, chatting with folks who want to know what we’re up to and taking pictures around Narragansett at some of our favorite spots.

Our path took us through new then familiar areas as we made our way. With only 33 miles to go we weren’t going to cover a lot of ground today so we could simple enjoy the moment. 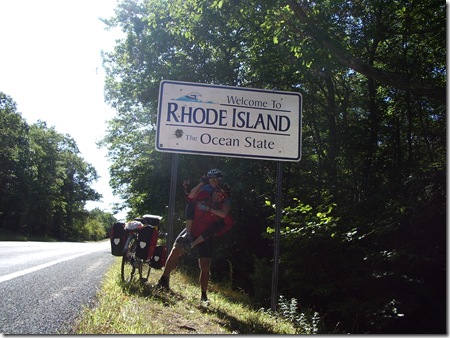 Route 138 was our first road for today and it took us to Wyoming, RI. It was a short spin and from there it would be all back roads into Wakefield.  Not too far from our start we crossed the Rhode Island Border and stopped for our last border crossing pictures.  Up ahead we reached the intersection of 138 and 112.  Cyndy eyed the farmers market and disappeared.  We gawked at all the produce and spent some time trying to pet the alpacas.  Stuffed the booty in our bags so we could get going again.

We turned to the south on 112 to avoid some construction and enjoy a designated bike route.  We were in familiar territory now, but not so much that we couldn’t miss a turn.  After a little meeting with Alice we figured out that the turn was still a head, woops!  The time passed and so did the beautiful New England farm houses and forest.  Before long we were turning onto Main Street in Wakefield past Point Judith Boats and into our last town.

We stopped at the Town Meat & Deli on Main Street. Word was out that we were on our final 10 miles and sandwiches were “on the house”.  Another unexpected fun gift from very generous supporters.  Now it was time to have a little fun and visit our favorite spots around the coast line at Narragansett so we could enjoy the view and snap our victory photos.  This little detour would add 6 miles and two and a half hours to our day, but it was all for fun. 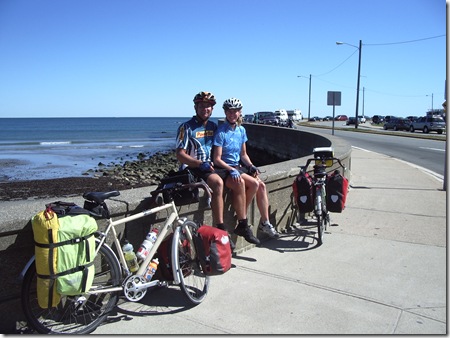 Turned the corner towards Narragansett Beach where Steve’s dad was waiting to get a few photos.  We stopped and said hello then took a moment to enjoy our first look at the Atlantic.  Moved ahead just a little past the old Coast Guard House Towers to get a few more shots then cruised down Ocean Road to Point Judith Lighthouse. 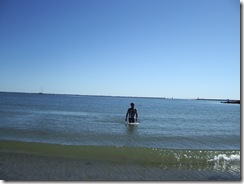 Such a refreshing sight to see the bright shimmering ocean after all that barren desert!  Block Island was clear as day and beckoned to us.    We swung by Galilee beach for Steve to jump into the water and wash the 3,500 plus miles of road grime off his helmet.  A bunch of beachgoers were curious as to what we were up to, so we spent 40 minutes sharing stories. 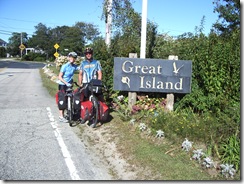 The final stretch from the beach into Great Island was only a couple of minutes.  Stopped one more time for photos at the sign for the island and now with only 1000 feet or so to go, there was nothing Cyndy could to to stop us from finishing.  She didn’t want the trip to be over but here we were.   Now it simply felt just like we were on our annual vacation here, not the end of our grand adventure. 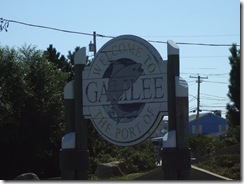 We pulled up to the house with little fanfare, just as planned.  As we rolled the bikes into the garage and took off the bike clothes we once again joined the ranks of the suburbanites.  We were no longer adventurers, just average folks doing average stuff.  Humph.

Safe and sound, we made it.   No major scrapes or detours, mechanical issues or illness.  We have seen dry barren moonscapes and lush ferns under forest trees.  The sound of a babbling brook, lapping  or crashing waves is a melody to our ears.  Stars and sunshine.  History of our country from the wild West to our Revolutionary fathers.  The appreciation of how vast and large our country is.  We at least had the occasional ability to cool off in air conditioning, have fresh food, ice and tires with a little more bounce than those who were in wagons, horseback or steam engine.  We travelled so many miles, slightly different accents but the same language and currency.