Today’s ride reminded us how much we appreciate the back roads with no traffic, although the generosity of drivers makes just about any route enjoyable or not.  We transitioned a number of times between quiet and busy and for the most part the drivers made it  all a pleasure.

Lots of history in this area as we passed towns that were established in 1725 and earlier.  The houses also had strong roots in 18th and nineteenth century.  We also toured far away places like Scotland and Canterbury.  We passed quite a number of general stores and town squares with white churches and grand steeples.

Steve stopped to wait for Cyndy in front of a 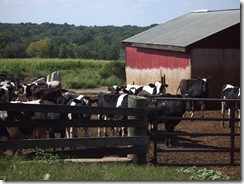 pen with a number of cows today.  Unlike the Colorado bunch that would run away at the sight of the bikes, these guys got up and came over to the fence to check him out and pose for photos.  Much friendlier crowd.

In Willimantic we stopped for our afternoon ice cream where Cyndy double dipped with a yogurt parfait at McDonalds and then a cone across the street at Friendly’s.  While eating our ice cream outside a cute little old lady stopped by to ask about our trip and to brag about her granddaughter who had just completed the Appalachian Trail.  She was very supportive and encouraged us to enjoy ourselves as she wished she had.

Late afternoon we stopped at Josie’s General Store.  It was as much a candy store as anything.  We were both hungry so we ended up with apples freshly picked, cheese and some other goodies to make our last night on the road a bit of a celebration.  As we were checking out the guy doing the pricing mentioned he would like to do the cross country thing too one day, so the conversation continued alongside our bikes.  We spent about a half hour downloading everything we knew until we realized we had lost precious time we needed to find a place to stay.

Cyndy went ahead and Steve headed out shortly after.  When we stopped a few minutes out to clarify directions, a couple riding a tandem pulled in behind to see what we were up to.  We gave them a briefing and they invited us to pitch in their back yard.  Given the lateness of the hour, the spots’ proximity to our route and their generosity, we accepted.  So we followed Jim and Kathy the 7 miles to their house where they not only offered their camper to us, but also provided dinner and very pleasant company for the evening.

These folks were much more committed to the biking thing than we are.  Steve got a tour of Jims’ shop and all the toys in it.  One odd item was bike tires with studs, the kind used for ice.  So when most of us say goodbye to biking season, they change the tires and go mountain biking, “this icier the better”.

Our sincerest thanks to them for taking us in.