Somehow we managed to get up and out this morning before lunch.  In fact we were at a breakfast place before 8:30… Let’s get an amen!!  While we were at the restaurant we inquired into the reason for the boxing centric community.  The waitress told us that there were a high number of local guys who have made it big from the town.  Who’d a thunkit?

The trail was much easier to find today because we started in the same place that we exited last night.  Into the woods once again to enjoy the countryside.  Today’s  route took us through nice valleys and small villages and of course along the old canal. 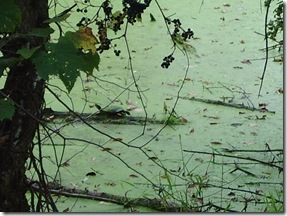 As we were passing one of the many flooded sections we noticed turtles sunning themselves on floating timber.  Not just one or two but maybe 10 or fifteen on one log.  Our attempts to photograph them were met with mixed results as stopping caused a mass exodus.  We were able to sneak up on on one or two and get a photo but the large groups would have none of us.  Too many eyes we think

We consistently think that we are in the middle of nowhere when a train comes zooming by on nearby tracks.  We even had one of the engineers blow the horn to say hello. 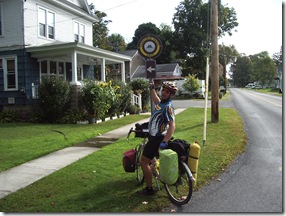 We had the pleasure of actually having signs marking the on road sections of our route today when approaching Rome.  Very nice change.  Of course all good things must come to an end and that happened at Erie Village a little reproduction town at the west end of Rome.  You know the story, well this one was even more unbelievable, but Steve has decided that complaining about this route deserves its own full page so you can follow future evaluations of the route and the people responsible for it at our Erie Canalway review page.

After a little bushwhacking and hearing Cyndy huff and puff in agony (or fear?) over the rough single track trail, we back tracked a bit and exited to the road.  We made our way through town and back onto the trail east of Rome where we continued on our way. Of course this was after consulting the map (useless) and Alice (who has proven her worth).

The trail ended once again as we entered the City of Utica.  This was expected, even had an end sign.  Riding through town gave us an opportunity to grab some lunch/dinner.  Cyndy wanted to go to the Triangle Coffee Shop and so we gave them a call to call to make sure they had the Lemon Meringue pie Cyndy was focused on.  While making the call Steve’s bike tried to kill him one more time, a little dancing and maneuvering and its plans where thwarted, again.  In the end they didn’t have any pie so we went another direction.

Left out of Utica after lunch for a stretch on the road towards Ilion where we would pick up the trail again and you guessed it, it wasn’t where the map had shown.  Stopped in a marina that we thought might be hiding the entrance, but it wasn’t. We started a conversation with some folks who were barbequing on the bulkhead.  They had taken their boat from Ontario, down St Lawrence Seaway, now back on the Erie Canal.  Sounded like they had a great time and saw lots of beautiful country.  I got the password to the network from them, whipped out the laptop at the steps of office and we were on track again.

At this point the sun was hovering over the western horizon, so with no time to waste we bypassed the small section of path leading to our camp in favor of the road to make better time.  We finally made Lock 18, our camping spot for the night, around 7:30. 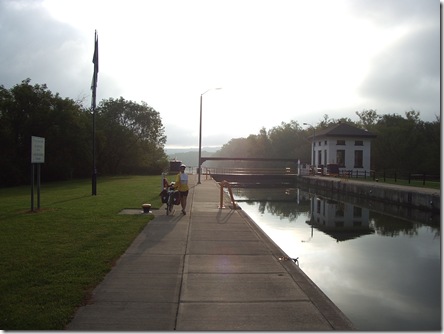 While Steve was wandering the lock Ed, the “night roamer”, showed up.  His job was to monitor water levels at six locks throughout the night.  He was a very nice gent and filled us in on the workings of his job and the locks and local resources for the morning.  We ended up chatting with him for at least an hour.  But the mosquitoes were getting the best of us and Ed had work to do, so we set up camp and called it a day.  No sense in having dinner or brushing our teeth, we will make up for it tomorrow somewhere where the mosquitoes won’t carry us away.