Out of bed at the ungodly hour of, ohhhhh… 8:15 this morning, then headed over to the continental breakfast.  Rushed through that in about an hour.  Hmmmm, what were we supposed to do today??  Oh that’s right that pesky bike thingy again.  The bikes are absolutely filthy and have turned quite gray after all the stone dust.  Harriet finally received a new chain after about 2,400 miles and Cyndy is hoping she will roll along much faster, at least smoother today!

After yesterday’s unguided tour through the countryside Steve was in no mood to take chances, so he plotted our route through Syracuse in Google maps and then printed the street directions.  Having the printer available in the hotel lobby was worth the premium.  What he didn’t look up is how to get back on the path this morning.

Allegedly the path started just east of our hotel with the entry through the Arby’s parking lot (great place to begin the pride and joy of NY).  This wonderful unimproved section dumped us at the local fairgrounds and once again there were no directions provided.  Made a few assumptions based on the “share the road” signs to the right… wrong again.  We road down “bike route 5” a little bit then decided it was time to look at the map again.

Pulled over and took another look at the paper map.  It shows the path to the south of the road we were on, the path was definitely on the north of the road.  Now we have absolutely no confidence in the map and Steve embarks on a tirade of colorful metaphors.  In between rants Steve pulls out the laptop and data phone and gets the electronic map showing the first segment we had just left located in the correct place and also our mistake.  Fortunately we can pick up the path just ahead. 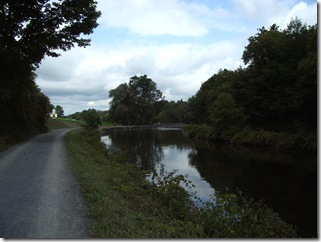 Once we get on the trail calm prevails and we begin to enjoy ourselves once again.  This section of the trail follows the original canal that we think hadn’t been widened in any of the post creation work.  The trail was right on the side and we had a great perspective of the canal dimensions. 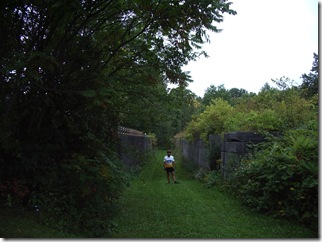 In Jordan we came across the remains of one of the original locks in this canal.  It was drained and mowed and all the stone work was still in place and in perfect condition.  The lock was two parallel systems each 18.5 feet wide.  Shipping sure has changed. 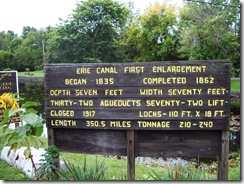 A bit further down the path we arrived at Camillus.  The Town had acquired the canal property and rehabilitated it creating a working canal segment about 2 miles long and a canal side museum.  The truly impressive part of the rehab is their rebuilding of the aqueduct one mile to the east that had just been reopened a month before our visit.  From the documentation in the museum, the first aqueduct cost $54,800 to build, footings and all. The last one cost $2.4 million.  They also run a river boat down the canal and over the aqueduct for your pleasure.  Nope, we didn’t take the ride. 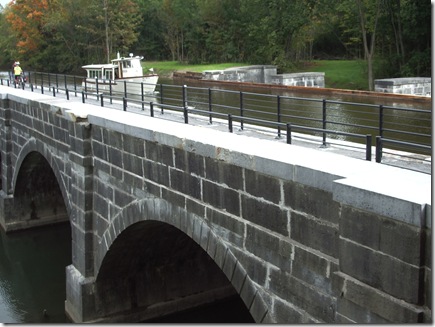 Just a mile down the path and it was back onto the streets to cross Syracuse.  Fortunately we had proper directions and except for missing one turn we entered and exited Syracuse with none of the indecision that had plagued us the last few days.

Just short of returning to the path we ran into the same folks we had the last two evenings.  They were a little unsure where to go next and they have the formal NY guide to the trail.  We chatted about our days and then confirmed our route with theirs and they were off again.  We were happy to be out of the big city, too many cars and potholes, thank goodness it was a Sunday as the route took us right into downtown. 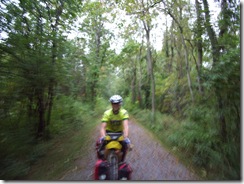 We stopped for dinner before returning to the path in east Syracuse knowing that resources were sparse for the evening trail segments and that we might camp in a park just 5 miles east.  Stopped at Pisano’s or something like that.  A real Italian food place with the good food, attitude and all.

When we got going again it was five fifteen, kind of late but we had only gone 30 miles so far so we skipped the campground and kept heading east along the path (that is we never saw the signs for the campground!).  The sections today have been less overgrown in a lot of spots so getting the feel for the canal was easy.  There are hints of fall in the air with some of the vines changing color or just a limb on some trees.  Lot’s of people using the path around east Syracuse too.  There was a marathoner doing his “16 miler” and lots of families on bikes, and dogs being walked.

Just after returning to the path we ran into another Aqueduct.  At some point (the year escapes us) they began replacing the wood trough with concrete troughs.  This was one that had been replaced and was still intact.

The route east of Syracuse was a very nice finish to the day, winding through quiet forest with the only indications of civilization being the occasional street crossing.  Although there is little civilization there is also little opportunity for rural camping so we reached our mileage in the town of Canastota.  Neither Alice nor the locals could come up with a place to camp so off to another hotel, Boooo.  The rest of the trail promises more camping opportunities.