We are certainly not going to get any awards for our morning motivation so far.  We barely made it to our 7:30 breakfast reservations, then proceeded to chat with the owners for another hour.  Ran back to the room to get the blog finished and sucked up another hour and still didn’t finish.  Couldn’t delay anymore so we hit the road without completing it.

Cruised through the downtown of Medina on our way out of town so Cyndy could look around and then we crossed over the canal and re-entered the bike path.  Right over the bridge the town had a large red apple (looked more like a strawberry) as a monument to the local growers.  We stopped to take  a bite out of the big apple! 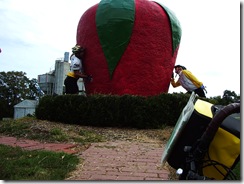 As we left town we got a bit rattled by rumble strips in the concrete canal edge, the surface gladly lasted only a hundred feet or so.

Apparently the local sandstone in this area has been used to build part of the Brooklyn Bridge and Buckingham Palace.  Who would have guessed? 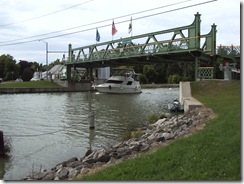 up to it a few minutes later as it waited to pass a draw bridge.  Steve has been watching ever since, hoping to arrive at the next set of locks at the same time.

We unexpectedly stumbled on a feature that we thought we had missed, the only road tunnel under the canal.  Steve couldn’t pass up the opportunity to walk under the canal and snap a couple of 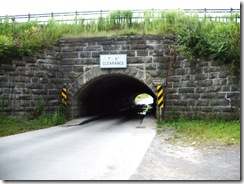 The ride was SOP until we arrived in Albion where the trail way was closed, again with no markings for a detour.  Fortunately we ran into some other riders going west as we arrived at the closure.  They had just completed a detour and gave us the info we needed along with a little map of the upcoming area.   They also filled us in on a good place to eat in Spencerport called a Taste of Texas.  So nice to have others out here to chat with.

We headed out into the countryside to follow the detour.  The roads were very nice and we had the opportunity to see what the local farmers were tending.  Cyndy was blurry eyed when she saw rows of cabbage, soy, corn, apples of all kinds.  In few miles we were back on the trail enjoying the canal and the forest that surrounded it.

Stopped in Brockport for something to eat around 2 ended up just getting ice cream and holding out for the Texas barbecue in Spencerport just 8 miles down the path.  We spent a short while chatting with the local bike shop guy & his dog Sprocket. 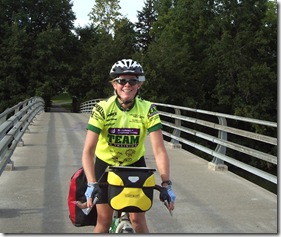 We arrived in Spencerport to find another very nice downtown area host to various little shops and found the barbecue.  Hauled in and ordered up a hardy lunch, another yummy stop.  They had WI-FI so Steve took the opportunity to finish yesterdays’ blog and upload it.  Started today’s too. 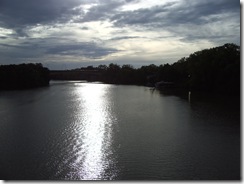 By this point it was after 4pm and the sun was setting much sooner than when we started this trek, so time pressure is beginning to creep in.  Down the trail 2 hours or so we ran into the town of Pittsford with its canal side restaurants and shops.  The smell of dinner was in the air and lots of people out enjoying a beautiful evening, but we needed to keep going if we were to reach our goal for the day.  Shortly after we ran into Fairport, same thing!! Darn!

We were just 4 miles out of Macedon but the sun was setting so we focused on getting down the trail.  We passed the landmark trailer park only to realize the hiker, biker park was still three more miles out so we zipped down the path in the waning light.  Finally the Lock and the camp area showed up out of the forest.  We crossed the canal on a narrow walkway mounted on top of the lock gates (great fun) and then investigated the area.

There was another couple on bikes already setup for the night.  We ended up chatting with them for forty five minutes or so.  They were from Pittsburg, PA doing the trail from Buffalo to Albany.  Had to get our camp set up so we said good night only to step out from under the tree to find it had begun to rain.  Steve looked around and found a covered picnic area right behind our selected site so we moved under the cover to avoid getting all our equipment wet.

We sat out for a little bit to eat and set up, then called it a night.