During the night the wind had changed to easterly and the shore line was quiet except for a little sloshing.  It was a Chamber of Commerce morning at the lakes’ edge. 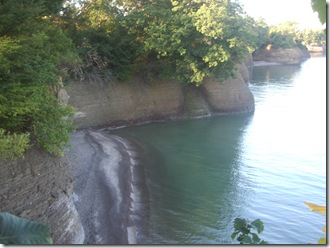 I really didn’t want to leave but the reality of ride distance and needing to move on kept me prepping to get underway.  Another very enjoyable day riding along the edge of Lake Erie.  Stopped at every harbor and water view that I could and snapped a bunch of photos. 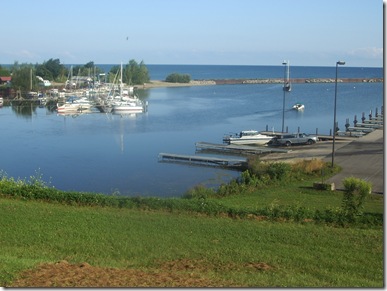 For a number of reasons I had a tough time finding breakfast this morning.  The area was definitely quiet, but there was also timing and my indecision that caused the issue.  I finally pulled into a corner store in Dunkirk.  Amongst other things, I got a chicken salad sandwich for later snacking.  I just happened to open the packing before I left and it turned out to be a mayonnaise sandwich with a little chicken for garnish.  That wasn’t worth carrying, in the garbage it went. 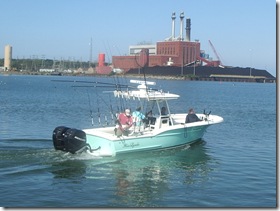 Continued along and arrived in Silver Creek some time later and found a “deli” and pulled in.  The “deli” was really a pizza shack misnamed.  I ordered a calzone then went about reviewing my route for the day.  Ate half, wasn’t the greatest choice either, and stuffed the other part in my bag.  I wasn’t Hungary anymore but I wasn’t feeling properly fueled either.

Before I left one of the locals struck up a conversation and recommended that I take the shore road that was coming up.  It ran right along the water and had lots of summertime tourist spots to enjoy.  I had intended to go that way and his urging convinced me it was the right way to go to enjoy the area.  So up the road a bit further and I left route 5 for Old Lake Shore Road.

This turn is when I realized the wind had come up behind me.  I was immediately being buffeted and my speed dropped by a few MPH.  But the road and its westerly direction would only last a mile or so, not a concern.

The shore road was what I expected, there was even the shore side bar/beach with all the commensurate activity.  I stopped to take in the scene and snap a few pictures.  As I was standing there considering a third meal in less than 3 hours it finally occurred to me that I had some nectarines in my bag that I had purchased the day before from a road side stand.  Yummy, I finally hit the taste button I had been looking for and had some food that would actually fuel me. 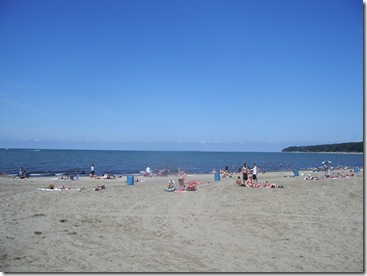 It wasn’t long after, that I left the shore road and returned to a much busier route 5 as I approached the southwest edge of Buffalo.  I new that 5 turned even more busy and was going to be crazy for a short stretch before I would get off and enter the bike path.  What I wasn’t planning on was construction in this area too.

As I got to the busiest end of 5, maybe the last 2 miles I would be on it, the right lane was closed for construction.  Of course with the right lane goes the shoulder.  I rode inside the blockade when possible but soon realized that the constant need to move in and out of the lane was more dangerous than just staying out there.  Then of course there was the road redirection and narrowing.  I needed to get off this road.  So I did at the next opportunity and once again Alice shone the light on my path and I was safely on surface streets.

As I was winding through the industrial area I had been ejected into, past the ADM and General Mills plants, I stumbled into the start of a bike path.  It wound around the backs of factories along what I assume used to be the loading dock.  Then the path opened up to a great water front park at the end of the original Erie Canal.  There was a well maintained wet display of WWII naval vessels and people all around enjoying them.  At this point the bike path disappeared.

Spent some time enjoying my surroundings then went looking for the continuation of the bike path.  When I couldn’t find it, I decided to ask someone.  I was clearly not paying attention when I selected a rider sitting on the side of the path to ask.  As soon as he started to speak I realized he was another kind of cyclist, one let’s say, who had no choice but to ride for transportation.  In the end he did know where the path continued and I was able to get under way. 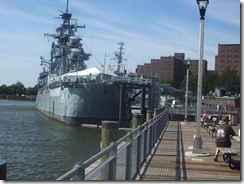 This wouldn’t be that last time I’d need assistance to stay on the trail.  It seems that signage was a bit scarce as the trail began and ended on various city streets.  Everyone that I asked was helpful and working my way through was very doable.  Just a hint for anyone riding the trail, there is a least one ‘bike only bridge’ with business hours.  It’s fully enclosed to you can’t “work it”.  I’m sure there’s a way around but…

The path stayed along the Niagara River and I could watch the local activity as I went along.  Lots of marina’s and water for folks to enjoy and they were dong so. 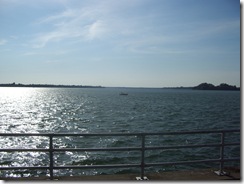 As I came out of one path I spied what I thought to be a Joe’s Crab Shack ahead, it wasn’t, but I was a mere 2 miles from my destination for the night, and the next two weeks, so I pulled in to have a congratulatory dinner and drink.  This down time also gave me an opportunity to find a hotel and chat with a number of people who wanted to know what I was up to.

I have arrived in Niagara a number of days ahead of schedule.  Cyndy will be coming in later in the month to join me for the last leg of the trip so I have made the choice to rent a car and go visit my parents in RI.  The rental car place and the bike shop where we shipped Cyndy’s bike were in opposite directions from the hotel, so I had decided that tomorrow I would go back to the bike path, ride up to the bike shop then ride over to the car rental place.

Hopping out of bed in the morning I looked out the window and it was apparent that the perfectly clear day of yesterday was gone.  Clouds, not a big deal.  I messed around the hotel for an hour or so, getting breakfast and such then it was time to go.  Walked to the door of the hotel only to find it raining. Now what?  I had come all this way and NOW it’s going to rain on me?  Back to the room to find out what’s going on, Weather Channel says “you’re going to get wet”.

All of a sudden, riding directly to the car rental place seemed a much better idea.  I waited for a break in the rain and made a dash for the place, just 5.5 miles away.  It rained on me, but lightly. Not too bad.  I picked up my rental car (Subaru something) and stuffed all my junk in, including the bike.  I felt a bit like the Grinch in the scene where he’s stuffing the Christmas tree up the chimney, just a little harder push, there. Did my logistics duty and was ready to hit the road.

Just a short 8 hours should get me to Narragansett.  I’ve decided to drive the bike route to check it out.  Don’t want to waste an opportunity improve the route it I can.  Boy the miles go past quickly in a car!  I will also get there just in time to enjoy tropical storm Danny.