Left the hotel this morning with a full stomach and a good laugh after seeing the look on a little girls’ face when I told her why my bike was covered with bags and where I had come from.  Priceless.

Medina was a very busy little area with a major interstate intersecting my route, but that wouldn’t last but a quarter mile.  Made my first turn this morning and it lead me right out into the countryside.  It was peaceful and enjoyable once again.  I am ahead of schedule so I took the time to enjoy the route.

Houses with big turf covered lawns, forest and plenty of untraveled road.  Somewhere in the first 1 to 2 hours I ran across a equestrian jumping event so I stopped and watched for a while.  The roads continued to be quiet as I wound from one to the next.  After a bit of trouble finding my way I entered the Cayuga Valley park. 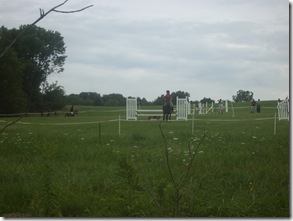 From the maps I thought this area would be at the ridge line but it turned out to be a valley.  A very bike friendly valley, where riders were going every which way, riding all makes and models.  The main feature being another rails to trails path right down the middle.  Unfortunately it ran north to south so I passed on this one. 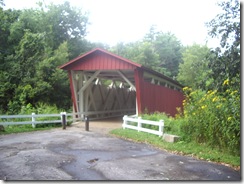 back to civilization.  But the road continued to be great.

I stopped and chatted with a couple on a tandem for a little while.  They were fully loaded and out for their first touring ride.  While I was there another group stopped.  They were out for the day and light.  I was drooling over their unloaded carbon fiber bikes.

I took the liberty of changing some of my routing to cut off a large corner and it turned out very interesting.  I ran into my first (very short) dirt road and a collection of not well maintained roads but it was OK.  The area was home to a very large Amish contingent.  They were going this way and that on foot and in their carriages.  The best part was the number of them that were out playing, visiting on the porch, eating together as a community.  There were kids everywhere, OUTSIDE!!! In the grass and dirt.  Not one of them was fat. 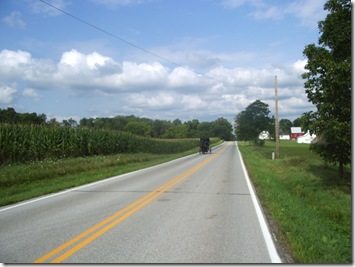 If you happen to travel this area the Amish don’t work on Sunday, so no stores.  Couldn’t get my ice cream in Mesopotamia, but the girls in bonnets sitting in front did direct me to the town well to get water.  I can’t remember the last time I ran a hand pump, but it was on the cape at the family camp. 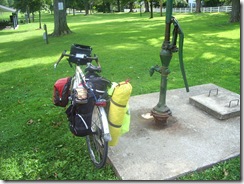 After Mesopotamia I was off to the bike path that would take me from route 87 to Ashtabula.  It was just down the road a few miles and and the road was enjoyably quiet.  A short time later there it was in all it’s traffic free beauty.  Within the first few miles I passed some people heading my direction and ended up picking one of them up.  He was in jeans and on a mountain bike so I never expected him to stick, but he did.

After five or so miles of him tagging along, I decided that I might as well get some info from this guy.  That didn’t work to well because it was his first time on the path too.  So off we went, talking about this and that, then it turned to politics.  Hmmm… this could go either way.  I let him go for a while then gave him a quick primer in economics theory and the value of the free market and a few other tidbits to chew on.  Hopefully I sparked some thought.

As we were chatting I passed my expected mileage of 80 so I was looking for a place to stay.  I had intended to pitch on the side of the path out of sight somewhere, but while this guy was with me I didn’t want to stop.  Figuring he would get tired and want to turn around soon I just kept going and so did he.  At 98 miles for the day a campground showed up right on the side of the path, with hot showers no less.  Is there a reason for everything???

Chatted with another pair of cyclists upon entering the park, then headed in to set up.  The sun was already sitting on the horizon so I needed to do some quick work to setup camp, call home, shower, eat and all before the mosquitoes came a calling.  I didn’t get it all done before the skeeters found me but it was done in the end.

While I was eating the folks came back to their site that is located, essentially, right next to me.  I though they were very quiet when I was setting up and that was why I selected the location.  Well they were quiet because they weren’t there. 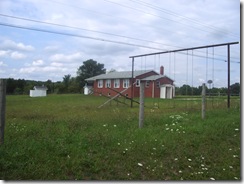 While I’m writing this they returned and have been getting louder as they continue to imbibe.  I was worried they’d be at it all night, but I moved into their neighborhood so I will adapt.   But oh what do I hear, the hooves of eight tiny reindeer?  No it’s just rain, party’s over.   Nighty Night my partying friends!!!

I pezzed someone on the path today, got the pez back, I’m so Ohio cool.

Oh yeah, one more thing I hate to admit, but in the spirit of full disclosure, I dumped off my bike one more time for a total of 3 now.  Another zero speed fall.  Clipped in left, not even a pedal stroke, over to the left.  This time I took a little skin off the left elbow, silly me.  But I was very entertained by the color of the blood and the wound.  I have never seen anything as bright red before.  I would almost call it pink, it was almost fluorescent.  Should have gotten a photo.