Stepped out this morning to get breakfast to find the ground wet and the sky partly cloudy.  The forecast again being for scattered thunderstorms, I wondered just what was going on to the west.  The front that has been on my tail for a week continues the threaten to pass but somehow I’m keeping pace with it.  Oh well, today my be the rain day.

I continue to think about the weather as I mow down every carbohydrate that is on the continental breakfast counter while simultaneously finishing off all the milk that is available.  Sorry other guests!

I wander, wondering as return to my room, is today a rest day?  I mess around the room a little reading the paper and cleaning up while I looked at the RADAR for the area, a couple dozen times.  Then looked out the window, clearing let’s go.

The road conditions were great leaving Seymour and I made my way down the road at a pleasingly calm pace, thanks’ to the wide shoulder and plenty of time.  I was thinking about nothing in particular when a black pickup came by at the usual pace, nothing unusual but for some reason it caught my attention.

It may have been the little black and white dog staring at me from the passenger side window as it went by.  When the truck moved a little ahead the dog switched to the rear window, perfectly framed by the edges of the glass.  He didn’t take his eyes off me as long as I could see him.  Now none of us need to be dog whisperers to know what was going through his head… “just let me out at the next light, he’s going slow enough, I can latch on to that ankle and go for one heck of a ride.  Growling and carrying on, oh what fun”  It was my good fortune that he never got the chance.

I stopped in the little town of Versailles for lunch and met a couple of mountain bikers who work in the area and ended up sitting with them while we ate.  They had some great information about the area and gave me some tips about getting around Cincinnati.  Some of their advice seemed to be focused on where the best party was so I had to pass on that, but they did put me on another bike path that bypassed two large towns and took me along the Ohio River for a bit. 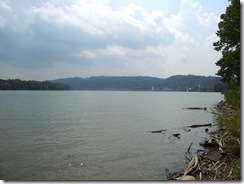 When I pulled into Aurora, IN I was stopped at a light and had a full trip conversation with two guys in the car beside me.  When the light changed I took the turn and started on the path.  This took me along the Ohio River where I had an opportunity to have another lunch and relax a bit by the water.  I really wanted to jump in the river and I hate having to wonder whether it is safe.

As I was coming off the bike path there was a thunderstorm to the west with it’s sights obviously set on me.

I called up NOAA (web page) for some advice and decided to make a run for it.  In the end I ducked under the overhang of a Restaurant  right at the Ohio border minutes before the heaviest rain came.  My feet my have been damp but otherwise I just watched it all go by. I didn’t entirely waste the time, I took the opportunity to write some blog stuff.

I started to pack up as the sky brightened and 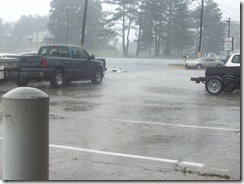 the rain stopped but as I walked around the west side of the building to see what was happening another round came in and I sat for a few more minutes staring at the motel right next door.  You bet I considered it!  The next place to stay was 30 miles away and it was already 4 pm.  In the end I pushed on not willing to hang it up yet.

Up the road about a half hour I turned on route 128 a road that would start me out on a great loop of the metro area.  There were a couple of sandwich shops on the corner and I new there would be no stores for the next couple of hours so stopped in one and struck up a conversation with the owners.

Always looking to the locals for a better way around, I asked about my intended routing and got a lot of bad news.  I really let them get into my head and I became anxious about the route and they had no alternates.  I spoke to two other cronies and they weren’t entirely encouraging but they had a better outlook.

Without a better way I struck out on 128 as planned, holding my breath.  Well once again I have learned about taking input with a grain of salt.  128 was not the worst road I have been on, not even close and when I took my next turn only 6 miles up the road, my route turned to a beautiful rural trail that was wonderful.  In fact there was even other riders out there.

One gentleman called to me, as he tried to catch up, so he could talk about my trip and I ended up helping him repair his bike.  That took 45 minutes and now It was 6:45 and I still had an hour and a half of riding to go.  He offered to put me up for the night but he lived an hour off my intended course and I just couldn’t justify it so I took my leave and headed for Fairfield.

Speaking of Fairfield, I have traveled the world today and I only rode 90 miles.  I was in Versailles, Utah, Kansas. Nebraska and Texas.  Don’t try this at home, I’m a trained professional.

Under the title of no good deed goes unpunished, as I pulled away from helping the guy with his chain, I had a flat.  Got that fixed and here comes a big thunderstorm.  Spent the next 90 minutes running from the storm, lightening and all.

So I went screaming through the country side only to find another bridge out, but there was a storm bearing down and I wasn’t taking no for an answer.  It took little manhandling, and shoes full of dirt, to get the bike over the construction but I was back on track and running like a scared school girl.  Managed to pedal, ask Alice about hotel accommodations and call the hotel to get rates all while dodging rain drops.  Once again don’t try this at home.

I went skidding in to the hotel and ducked under the cover and believe it or not nothing happened.  The storm ended up slipping by to the north and all that running was for nothing.  Now it’s time to relax, pez to you.