Late start today, spent the morning chatting with some folks while I stuffed down the wonderful continental breakfast at the Econolodge.  Asked Alice about an easy way back to 50 and ended up exiting town on a great back road that lead to 50 east of town.

50 was a fantastic concrete surface with a wide shoulder and I was enjoying the conditions, until the rumble strips showed up.  Unlike, other states where the strip is parallel to the lane of travel, this one covered the width of the shoulder lane for about 3 feet.  So for 20 miles it was brump…brump… brump.  I’m going brumping crazy. 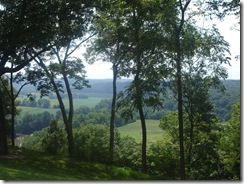 Stopped in Washington, IN for brunch at the KFC and chatted with the ladies behind the counter for a few.  Nice bunch.  The landscaper dude couldn’t understand why I would want to ride across the country.  He thought insanity may be the answer.

Hit the road on the east side of town to find a very busy section of the highway but plenty of shoulder, for a while.  As always the shoulder disappeared and the traffic didn’t and for the next couple of hours I was wondering what I was doing on this road.  The road surface was the same as so many other miles of 50 but there was much too much commercial traffic.  Finally got to the 50/60 split and most of the traffic was gone and I could enjoy the ride once again.  This lasted all the way to Seymore 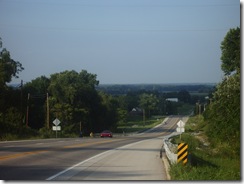 Arrived in Bedford, this town seemed as good as any to have lunch and take a short break so I stopped at a little diner on the outskirts. I relaxed in the back for at least 45 minutes.  Filled in the girls behind the counter on my trip, they couldn’t resist asking, after I had taken up residency.   Topped off the fuel tanks and the water bottles and decided 4pm was too early to stop so packed up and shoved off again.  The wind was behind me and I didn’t want to miss one second of that rarity so I targeted Brownstown 28 miles away as my destination.

I was adamant about not staying in a hotel tonight knowing that tomorrow I would be in the vicinity of Cincinnati and there would be no way to camp.  To my surprise there were two or three camp grounds before Brownstown but I wanted the full distance.  I had already decided I would just camp in a corn field and that would be good enough. 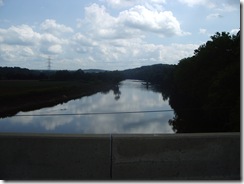 Well Brownstown, came and there was still plenty of light and Seymour was only 10 miles up the road so off I went.  Seymour was a much larger town than I was expecting.  With the main street, route 50, stretching several miles with retail on both sides.  I kept I eye out for somewhere to eat because I didn’t want to have to go back out after showering, a time saving tactic.  Been thinking about Chinese for a couple of days so that’s what it was.

Quick in and out, made some phone calls about a room and off I went. Less than in hour in town and I was fed and showered and ready for bed.  So maybe you’re wondering what happened to my commitment to camping????  It went out the window when a passed the 100 mile mark for the day and there was few prospects for camping.  There was a shower out there with my name on it. 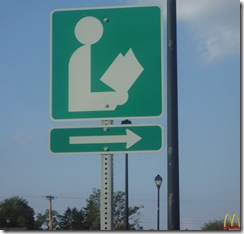 Here’s a riddle for you today.  I have seen this sign a couple of times and I think it means one thing and I am wrong.  What do you think it means?