After seven days of progress or semi progress, we decided to take a day off to rest.  Of course Cyndy’s idea of resting means we ride or walk around the town and see the sights for hours.  Steve’s idea of rest is sleeping a little late and exercising his remote control hand and backside.  Unfortunately there was little easy chair driving today.

We started the day with an 8 am breakfast at the B&B, where we met up with the cyclists we had dinner with last night.  They were all packed and ready to head out as soon as they finished eating.  We were in casual mode.  Not in a terrible rush to do anything. 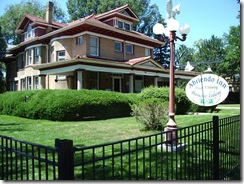 Breakfast arrived for all of us and we continued to chat.  The other couple having an agenda finished up quickly and with a couple of photos and farewells they were off to climb the hill we had so effortlessly coasted down the day before.

We went back to finishing our vittles.  Pam, the proprietor had been a cook and caterer in another life and it showed.  Wonderful poached eggs with cream, herbs, lemon zest and havarti cheese, herb bread, fresh plums, need Cyndy ramble on?  The breakfast was delicious, we could have gone for another.  After chatting with some other folks in the dinning room we finally were motivated to make a move.  Grabbed the sun block and headed off to the downtown area. 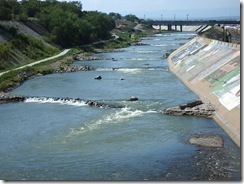 to research everything on Kansas because she hadn’t planned to move on from here.  From there we crossed the river that provided a view of the man made kayak course.

The Arkansas flows out of the dam and right through the middle of town so they set up rocks and such to bring white water kayaking to the city.  Very inventive.  Just on the other side of the bridge was a revitalized 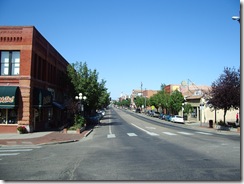 Up a couple of blocks further they had created a river walk.  Essentially a long pond with walks on both sides and fine landscaping.  There was also a little patio boat that appears to run back and forth.  Today was the Italian day festival, so there were vendors all around the area and a band setting up in the amphitheater that was also found on the river walk.

We pressed on so that Cyndy could see her options for lunch and ended up at the bike shop that Steve had shipped the bike case to.  But before we could go there, lunch was a must.  Cyndy went to the Solar Coffee shop for a spinach salad and Steve went to the Irish Pub for Sheppard’s pie.  Yes, we ate together, Cyndy brought her salad to the pub, and ate some of the pie.

With quenched appetites we moved on to the bike shop.  We had already called to be sure the case had successfully arrived, but we thought we should let them know our plans to leave it there another week (that was always the plan, but better to be sure).  All was fine at the shop so we looked around and moved on, strolling back along the same route.  Cyndy stopped in to have her bangs cut so she could see for the rest of our trip. On our way back we grabbed some groceries and it was time for a little R&R.

Walking around the city it became obvious that news stories of a severe storm with golf ball size hail wasn’t an exaggeration.  We saw one car after another that looked like the surface of a golf ball.  Dimples all over the car; hood, roof, trunk and a bunch of broken windshields.  We’re glad we played those two days in Colorado, otherwise we would have ridden right into the storm.