Today was a true touring day.  There was no rushing but it was lot of chatting with locals and ducking rain showers. 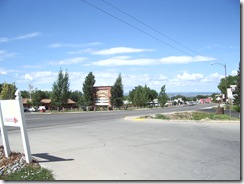 breakfast so Cyndy could have her precious coffee. (by the way it was a very cute place with good coffee & tasty cinnamon rolls) There we met Dave and Darlene.  They were locals and bike riders, at least he was.  So we proceeded to sit with them and chat until 10:15 when they had to go and we realized we only had 15 minutes to clear out the motel room.  When they heard we may be touring back through by car 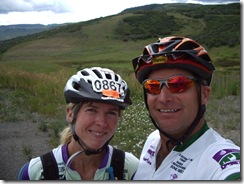 next week they invited us to stay with them and offered to show us the area.  Again a very nice couple .

We rushed back to the  hotel and frantically loaded our bags and mounted them and ran out of the motel with the proprietor and house keeper chasing us with a broom.  Ok, they didn’t actually have a broom. 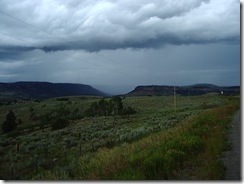 heading up to Blue Mesa reservoir a two peak, 4k foot climb, the weather took a turn and we could see darkening  clouds behind.  As it started to sprinkle a lunch stop miraculously appeared and we stopped in to have a bite and wait out the little squall.

While we were eating another rider arrived from the east and had just beaten the storm, his female companion wasn’t so lucky.  She was just behind him on the descent and got caught in a hail storm which forced her to take refuge under a rock overhang.  She seemed to take it all in stride, 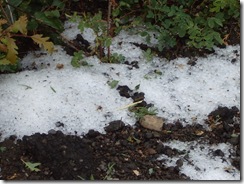 although she appeared quite cold despite her jacket and rain pants.  We chatted with them for quite a while, although we never exchanged any names.  As usual we shared tips about the upcoming terrain and conditions.  We from the desert looking forward to cold and they from the cold looking forward to the desert.

Once again we were off and a couple of hours later we were descending into the reservoir area only to run into a shower again.

Luckily there was another little shop for us to hide from the rain in.   We chatted with the owner there for another hour, discovering all sorts of info about them and the area, like the Blue Mesa reservoir is the largest lake in CO.  Didn’t know that.  If you remember from three days ago in Grand Junction the temp was 135 in the sun, today it was 62 at mid afternoon.  That’s a 73 degree change for those of you who care.

By the time we left her store it was already 6 pm and we had still had 11 miles to go.  Wow, where did the day go.  It continued to sprinkle on us until we got to the Elk Creek Campground when the skies started to clear.

In a big rush we grabbed a shower, 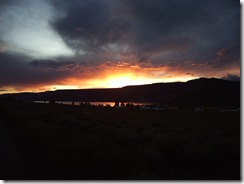 ordered some dinner and made camp.  Of course it didn’t go that smoothly.  The restaurant was out of a lot of stuff so I got fish and chips.  This against Steve’s rule of not ordering seafood outside of New England.  But to their credit it was great.  The shower only took quarters and no one had any to share, so we used the leaky shower valve and the sink to bath.  But in the end we’re clean, fed and camp is set up 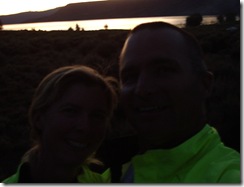 in a spot with a stunningly beautiful view. (So much for using up the freeze dried food from California, guess it will have to travel a few more miles).

Today included lots of valleys that were green with streams, wildflowers, rocky mountains & mesa tops.  We actually had goose bumps, our overall temp has dropped 54 degrees from our prior afternoon high temps.