Up at dawn… then we turned over and ignored it.  So much for a 6am start. 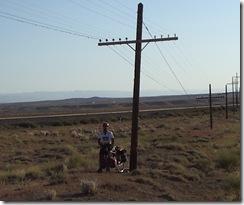 the tent and got to feeding ourselves and packing up.  The landscape was Utah’s’ usual sand and brush. We shook the fine powder off our things and shooed the flies away from our oatmeal as we tried  to muster a start to the day.  The sun was well into it’s morning arc when we finally pulled out on to the road.  It was such a pleasant surprise to find the breeze had freshened and it was dead ahead.

We lumbered down the 10 or so miles of back road leading ahead to the intersection of I-70.  This was executed with no particular commitment to forward progress and set a tone for the day.  We had only 50 miles to check off and all day to do it.  Shortly after leaving or camp site we entered Cisco. It is really just a scary looking ghost town of dead cars and ruined buildings in the middle of nowhere.  I wish we had taken some pictures of it.  Thank goodness we didn’t try to make that a destination spot!

At the on ramp to I-70 we stopped for a second breakfast of mountain dew, potato chips, an apple and probably something else we shouldn’t have been eating and just can’t remember (ok, at least breakfast was healthy with oatmeal!).  One major pleasantry of Utah, they have trash cans at the rural onramps.  Oh, and the drivers have been VERY nice.

We plodded our way down the highway looking for a reason to stop and eat some more, rest stop ahead, cell tower 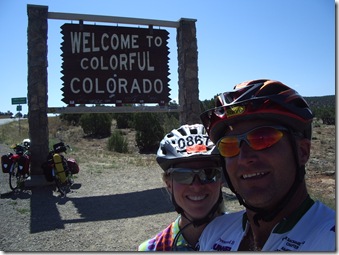 right here.  We crossed the Colorado border around 12pm said our farewells to Utah and relished in the idea of the surface water that would again come our way.  The “bike lane” was beautiful and smooth and clean.

Steve stopped where there was cell tower to call his parents, then took a photo and uploaded it to facebook and generally lacked a riding focus.  Cyndy went ahead.  When Steve finally got back on the road he almost fell off the bike, a flat.  With Cyndy so far ahead he just pumped it up and continued, making sure Cyndy didn’t get too far ahead.

About 20 miles out of Fruita (pronounced just as spelled, Fruit UH) is when the wheels literally fell off the day.  The beautiful lane had turned to a gravel and tire chunk mess and we had to ride right through it.  About two miles from our lunch stop Steve had to stop and repair a flat.  Cyndy went ahead at this point to scout the lunch stop and do what needed to be done.  It was hard to ignore the river on the other side of the trees.

Cyndy stopped at the first exit and got a sandwich and made herself comfortable while Steve make his way there.  A quick phone call between us and Steve was pulling into the parking lot.  It may have been the heat or something else, but as he rode up to the bike rack he misjudged the front pannier clearance and got knocked off the bike.  A slow speed dump that hurt the ego far more than the body.  900 miles traveled only to fall over at the bike rack, jeez! 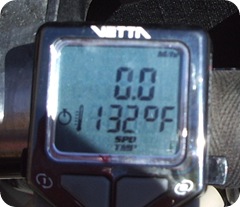 About 4 sodas and a little A/C cooled our bodies while we sat in the middle of the hustle and bustle of a very popular truck stop.    Boy, did we need that cold drink.   Once we went back outside, about an hour later, Steve’s bike thermometer read 132 degrees.  UGH. 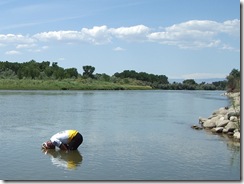 to the Colorado river right next door so we high tailed it over there.  Walked down the boat ramp into the cool, wonderful water.  After too short of a visit with the water we had to start thinking about reality.  Steve ran up to fix another flat and after finally agreeing to move on, Cyndy had a flat.  Two more would plague us in the following 10 miles.  This situation was not all road debris.  We had a bit of trouble with Slimes’ scab tube patches.  Going to REI tomorrow to find some Park Tool patches.  During 880 miles of riding we had two flats in the last 25 miles of today we had… Way to many.

Stopped at Wal-Mart to see if they had tubes and they did.  Just needed the piece of mind.  Fortunately and unfortunately Cyndy chatted with the greeter while I was hunting and gathering and found out we had gone to the wrong section of town for a room.

Last words out of his mouth was “safe travels” and out of Cyndy’s was “ no more flats” only to find her back tire was flat again!

Off to north east corner of Grand Junction for a hotel.  Turns out to be a very nice ride through a nice part of town, more residential and found the hospital, not that we needed it.

Checked in and fell right into the pool.  Ahhhh!! all we need is some dinner and sleep.  Tomorrow is a rest day so we’ll be staying two nights in the area.  We’ll run down to Main St. to join in the fun tomorrow.

Note: Nevada has the best roads thus far!  Another fun thing the other day was counting the number of people who tooted their horns for us, we had 14.  Today only 4.  The number of cars on the road jumped too though.