Maintaining our causal touring mornings we missed the continental breakfast but between provisions and the generosity of the hotel clerk  were managed to eat too much just the same.  Cleaned up and got outside to a chilly morning, the thermometer said 52 degrees.  BBBBrrrrr. 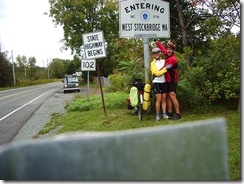 Just 0.8 miles down the road we crossed into Massachusetts.

The morning roads were quiet and pretty as we  wound our way just 8 miles to the town of Stockbridge.  This town was a nice New England location with the architecture and age you’d expect.  The main street was lined with shops and restaurants and Cyndy was intoxicated by the possibilities.  We took the time to stroll the sidewalk to window shop and even though we had eaten just 45 minutes before we couldn’t resist the charm.  Cyndy was checking the cafe’s out when we looked at the menu at one quiet place and there was the story of Alice’s Restaurant.  Not able to resist we went in. 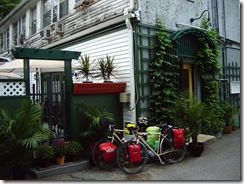 This place, it turns out, is the location of the restaurant owned by Alice and made famous by Arlo Guthrie’s song Alice’s Restaurant.  They had a photo with Arlo, Alice and the new owner Theresa displayed in a case.  Steve was in need of a T-shirt from the place but they were out of the cool ones that he wanted so the only souvenir was a couple of photos.  But 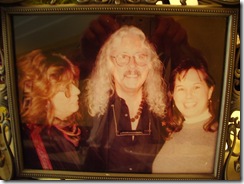 now we can say we’ve been to Alice’s restaurant.

We rolled out of town full of food so we needed some miles to work it off.  We passed through rural villages with great homes and yards as we continued to turn this way and that through the forest.  We passed a general store around 3pm, time for lunch.  Talked with the owner for quite a while and ate some more great food then we enjoyed a 5 mile down hill to the outskirts of Westfield.

Cyndy was less excited about this fast decent because the temperature had not risen above the mid-fifties all day.  A bit more than half way down Steve stopped to check up on a teeth chattering Cyndy who was threatening to put her rain pants on.  The portion just below was more rolling and gave both of us a chance to pedal and warm a little while we came flying into the stop at the bottom.

We turned a little south of Westfield and enjoyed another nice quiet road with beautiful houses, at least for a little while.  As we passed south and east of town the roads became very busy as commute time reached its peak.  Fortunately the drivers were generous and the ride south out of town was enjoyable. 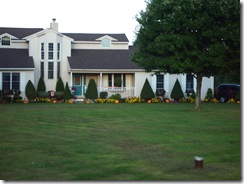 We passed through more rural neighborhoods and farms as we headed for Enfield.  Here we passed a collection of barns that had caught Steve’s attention because the siding was configured to open every fourth or so board.  There were agricultural products hanging in the barns.  Neither of us knew this was grown in the area.  Any idea what this (Picture to the right) product is???? 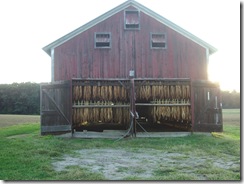 We crossed the Connecticut border then left the rural setting to make our crossing over the Connecticut River.  Steve had passed over this bridge a couple of weeks ago and knew it was under construction and disallowed bikes on the road and also that the pedestrian lane was closed.  He had hoped for a miracle, one where the pedestrian path was completed and open when we got there.  All Cyndy knew was that Steve was very insistent that we cross the river tonight (not during work hours). 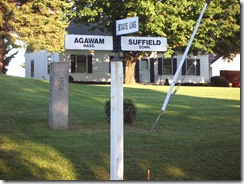 Well the construction hadn’t moved forward as far as Steve had hoped but the pedestrian path was somewhat clear.  So he scoped the scene and we dashed across without falling off or getting arrested.  We were never at risk and the alternative would have taken us 30 or so miles out of our way, an unpalatable alternative.

On the eastern side of the river Alice gave us directions to the local Motel-6 just 0.7 miles away… Oh but we can’t use route 190 in this section so the long way around was 3 or so miles.  The area was committed to making us do extra miles, we’ll give the win to Enfield  on this one.  The sun has been setting earlier and earlier and we slid in just after the sun had set.  The headlamps actually received a bit of use, glad we had them with us.