We enjoyed our morning at the B&B, not really wanting to get out of bed at 7, but, having agreed to seven thirty for breakfast, we had no choice.  The lady made us a nice breakfast and we sat around the table eating and recounting our adventures for her.  Before we knew it it was nine fifteen and we had to get going.  Ran back up to the room to get our stuff together and move along. 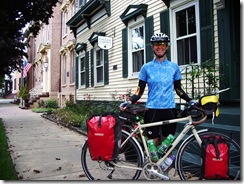 We finally got our bikes out in front only to find Cyndy’s rear tire flat.  We should already have checked it given that it was low yesterday, but we didn’t.  So fixed her up, washed our hands while we could and started on our way.  A couple of turns and a few blocks and we were once again on the trail making our way east.

There we a few folks out on the trail in various places.  Just outside of Albany a guy stopped us to find out about the trail west to Amsterdam and some others stopped to chat as well.  The first guy was meeting a group who had rode from Buffalo and the second was with a senior riding club that came out twice a week to enjoy the trail and avoid getting “old”.  One lady was a Brit and loved Cyndy’s Brooks saddle and Raleigh bike.

The trail was paved, well marked and according to our map (online version) it would remain that way for the remainder of the trip to Albany. 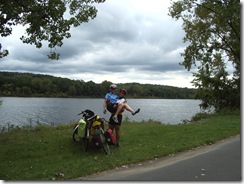 After a detour around the General Electric research facility we found ourselves riding alongside of the Hudson.  The Erie Canal was gone for good and we had somehow missed the last locks.  Steve wanted to see these because they are a set of 5 locks in series that looks like a stair case.  Oh well.

A couple more on street excursions and we were eating lunch at River Point Bar and Grill at the Albany river front.  Cyndy had wanted to go over to Troy for lunch (actually to find the Uncle Sam origins of the “We want you ”slogan”) but a local warned us about the area and we chose not to go.

This lunch marked the last of the Erie bike path and the end of our riding on paths for this trip.  From here it’s over the Hudson River and the down hill ride to little rhody (RI) via rural roads and small towns.

Leaving lunch we had a couple of sprinkles of rain but that’s all it amounted to as we got underway. 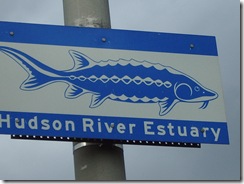 While we were on the bridge over the Hudson, we stopped to take a couple of photos and ran into a gent from Great Britain.  He was hiking around New England and in the process of looking for a trail that went north and east into Vermont.  We weren’t any help.

The other side of the river turned hilly and we spent the next couple of hours getting used to riding hills again.  These climbs are a bit different in that they are short but relatively steep and are stacked one right after the next.  After a week of flats along the canal it was a bit of a reality check.  We’re up for it!

We wound our way around the New York Throughway and finally reached Canaan and the hotel that Steve had stayed in a couple of weeks ago when he drove the route. 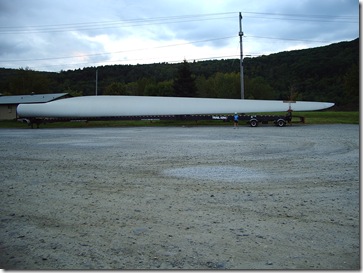 At the truck stop right below the hotel, Steve saw trucks with a complete wind turbine set parked and couldn’t pass up a close encounter.  If you look at the photo of the blade there is a black line towards the right tip.  That’s not a tie or dirt on the lens. it’s Cyndy standing by to provide scale.  Click on the photo to enlarge it, I’m not kidding.  Grabbed a really good sandwich from the truck stop at the same corner then retired for the evening… after a shower and doing laundry of course.

The day’s non riding funnies include a tip on how to make your eyes water to get a bug out and how to shop for dinner in a mini mart.  Just check with Cyndy for her latest medical treatment plans.