Woke up this morning to the sound of some anglers just before the alarm went off.  We had left the tent fly only partially on to help with ventilation and during the night it had blown off so we had a nice view of our lock and the surrounding forest.  While we were admiring the surroundings we also noticed a couple million mosquitoes trying to break in and have breakfast.  A couple had lock picks and others with battering rams, we’re talking determined. Let’s just say Cyndy found squished bugs many miles later, one at the nape of her neck.

Given the hostile environment we packed everything we could while barricaded in the tent then made a run for the bikes, packing everything in record time.  Grabbed the bikes and headed for the other side of the lock and into the parking lot.  Whew, we were much safer.  Boy, is it a challenge to be walking that narrow walkway on top of the lock gates, with the open grate to stare at the water below.  Time to brush the teeth and make sure we have everything.  All this rushing had us going in record time. 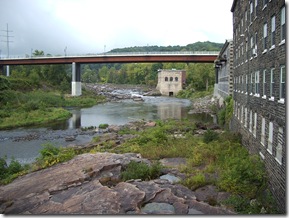 Headed six miles down the road to Little Falls to get breakfast at Ann Street Cafe as recommended by Ed last night.  Whipped out the computer to finish the blog entry and check our route for today.  Not wanting to have a repeat of yesterday Steve took the time, while we had an internet connection, to check each departure from a path and plot the streets required to get to next entrance.  This consumed 2 hours so we ended up leaving at ten forty, so much for a early start, but we were prepared.  All that work and there was actually plenty of signage to direct us. 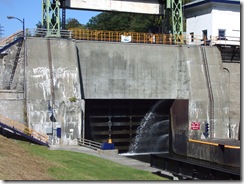 Shortly after getting on the road we came across Lock 17 the largest drop of any lock on the Barge Canal at 40.5 feet.  This one had a down stream door that dropped vertically into place and had a concrete bulkhead overhead to accommodate the large change in water level.  Steve wanted to just take a quick look because of the late start but we ended up there for a half hour anyway.

Headed up the path to lock fifteen where we stopped for at the camping area and enjoyed a few minutes of relative quiet along the side of the canal under some pine trees.  Didn’t miss the opportunity to snack a bit while we were stopped. 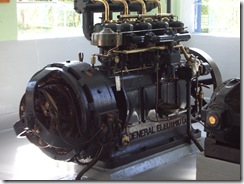 The power station door was open for viewing so Steve took the opportunity to check out the old switch gear and the two original four cylinder gas engines driving DC generators.  Cyndy just nodded when she heard about the hardware, but enjoyed staring at the water and eating fresh Concord grapes.  Who knew there is actually a way to eat them by popping the center into your mouth, spit the seed then enjoy the skin part.

The path went through the edge of Canajoharie, which means “pot that washes itself” (too bad we didn’t find the actual creek with this whirlpool in it)..  Stopped at a local diner down Main Street for a soft serve ice cream, if you can believe that.  The lady gave us a small size cone that was piled a mile high.  She started asking questions and was in disbelief at the answers so we had to show her the bikes.  As we sat in the restaurant we could hear her repeating the story to anyone that would listen.

Came across another lock 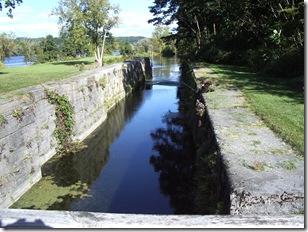 from the original canal.  It was not as accessible as the others but very cool just the same.  A replica of a grocery store also stood on the spot.  It was hard to image that  the large canal in the background didn’t exist when the grocery was in operation.

At this point we started to look at our evening destination.  Amsterdam was a choice at only five miles away, but we really wanted to make Schenectady.  (Cyndy just loves the name with the accent in the wrong place, just keeps thinking of Randy Meyers schmackdaddy hat…) Some re-plotting gave us reassurance that it was only 20 miles away and we still had two and one half hours of sunlight.

The trail was paved for the rest of the ride (where there was trail) and we made very good time until we stopped at lock 8 on the outskirts of Schenectady to find lodging.  We found the information we needed and Alice did her usual job of guiding us to our destination.  Luckily the B&B we are staying at was right on the trail (it was really on the city roads that lead to the next segment of trail).  This B&B was built c1775 in the historic downtown area.  Lots of magnificent stone buildings.  We walked up to diner on Erie St.. We were told the original canal ran where the street is today, also hard to imagine.