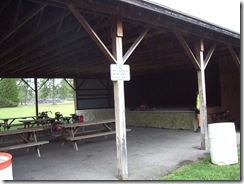 The day dawned, cool & misty but we were nice and dry inside the covered picnic area.   It was our fifteen minutes of fame, we slept on the stage in Macedon!  The morning excitement included watching the same Carver boat go through the lock that we followed yesterday .

Another beautiful trail ride through the trees and following the canal.  In Palmyra we made a 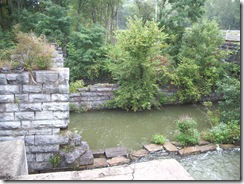 quick stop to visit the Aqueduct, which is a structure that ported the canal over the Ganargua Creek via a stone and wood trough.  Although the wood portion is long gone the stone was still intact and provided a great insight into the workings.  We also grabbed a bite to eat at a local diner, the off bike activities having sucked up most of our morning.

We have been following the Erie Canalway Trail, however it is not a complete trail as of now, only 220 miles.  The path ends in Newark but we faithfully followed the street markings for many more miles as we assumed it would connect. In the town of Clyde there was a split, left for State Bike route 5 or this other sign…we went right, through beautiful rolling country side and farms.  Another Amish community with several buggies and children with dresses and bonnets!

When we got to Seneca Falls, we realized the trail markings had detoured us via Seneca Falls and Waterloo, an optional route that added 20 miles to our day.  Here Cyndy is starving (no ice cream stops as of yet today nor fruit stands!) and cranky and Steve is not impressed, again, with the markings on for the trail.  Did we mention they aren’t just bad, THEY DON’T EXIST!!!!  More virtual reality bike trail riding. 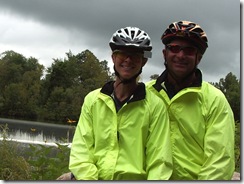 When we got to Waterloo we were very flexible on the food front so we ended up at KFC (this kills Cyndy for the reasons of it not being a local shop and fast food to boot).  Then headed into the town where we had the privilege of touring the back streets as the “signs” for the trail took us in circles.  Then we found the problem, these markings are for a century ride and we found the start.  Tempers getting short at this point!  It was time to take control instead of being lead blindly.  Stopped on confirmed several turns and avoided a couple of mis-steps and finally we were back on track.

It was rather ironic that we found our way into Seneca Falls as Cyndy had been interested in touring the town but it was too far off course.  At least we were able to get “close” to the Finger Lakes.  We also learned that this was the birthplace for women’s rights.

We decided Weedsport would be our stop for the evening. As we were calling the two motels in town the folks we camped near and chatted with last night walked up to us.  They had a leisurely breakfast, a casual 45 mile 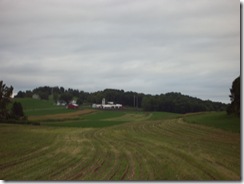 day, got to town in time to have dinner and do laundry then off to the grocery store from where they were returning when we met them.  Can you imagine what was going through our minds!?!?!

Although the detour took us through some beautiful countryside and the roads where great, it would have been nice to have made a conscious decision rather than be hijacked.