Whoa!! Forty one miles!  We’re getting a little crazy here.  We did get a late start after handling the logistics of going to the bike shop where Cyndy’s bike was reassembled.  Then unloading the rental car across the street on the bike path. Then dropping off the rental car and riding the twelve miles back to meet Cyndy.

While waiting for Steve to return the rental car, Cyndy was able to rearrange the panniers, figure out the map orientation, watch the few boaters and chat with several walkers & cyclists enjoying their morning.  Three older gentleman were just too darn cute as they gawked at all the stuff we had out on the picnic table, they were going “credit card style” at a max of 40 miles per day, enjoying their retirement & old friendships as they met up here from all over the states. 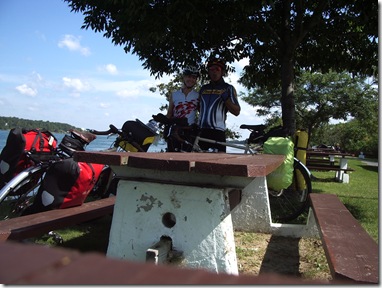 12:30 we were finally on our way, but those first few pedal strokes felt alien as we adapted to our fully loaded bikes once again.  Thankfully the path was paved and quiet to give us a chance to get with the program once again.  We have the fortune to enjoy this path, for the most part, all the way across New York State, from Buffalo to Albany.

Trees, trees everywhere!! Except where there is water.  What an amazing change for Cyndy since her departure from the trip in Kansas.  Here everything is green!  Beautiful blue sky day.

Here’s a bit of info for you who might be considering a ride on the Erie Canal Trail;  The trail transitions from dedicated path to road side fairly often.  The signage is non-existent, save for the generosity of someone who painted some marks on the road surface.  Very disappointing for a trail so well documented electronically (a bit of virtual reality).  We had intended to go through the Niagara Falls area on the way out of town… Missed that turn.  Had to guess (incorrectly) at one or two other intersections.  No harm in the end other than adjusting expectations, plus we passed the same ice cream store 3 times.  We took that as a sign.

We followed the Tonawanda Creek for a while, it was reminiscent of the Delta but even nicer with the green manicured lawns and East Coast style homes. 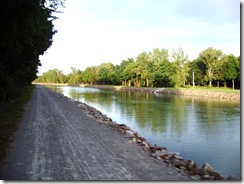 The first town we encountered was Lockport.  Cyndy spied the local farm stand and Steve the canal and first lock we would encounter, we parted ways here.

Both of us satisfied with our findings, we descended into the little gorge housing the lock and the beginning to the next trail segment.  There happened to be a museum right at the entry so we 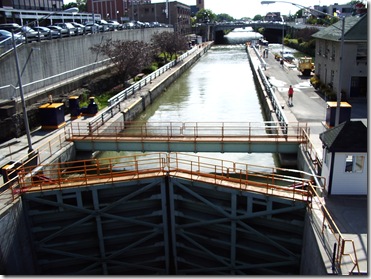 stopped to get educated on the local lock system.  Chatted with one of the workers and had him snap a photo of us.

For the next 100 miles we’ll ride right on the tow path at the side of the canal taking us behind yards, buildings and forests right on the canals’ edge.  Very enjoyable afternoon ride, complete with farm fresh local apples for a snack. 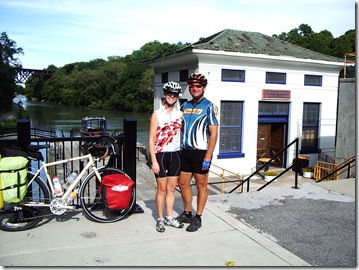 Slower speeds prevailed as Cyndy became reacquainted with Harriet her chariot (who may only be a pound or two lighter, but quickly filling with snacks & maps) and with a trail that is paved only with stone dust.

We stopped in Middleport around 6pm and struck up a conversation with a local walking his dog.  Got the skinny on the local eateries and lodging, as well as some info on the next town.  Steve wanting to get in at least 50 for the day was ready to push on and Cyndy was happy with “touring”.  In the end sunset came very early and the decision was made for us.

We wheeled into Medina and made a couple of phone calls to set up a B&B for the night (yup, camping went out the window too).  By default we ended up at the Historic Village Bed & Breakfast, turned out to be a good decision.  Wonderfully remodeled 1866 home, clean and friendly owners.  Good food right down the street too!