So here we are back on the tour September 8, 2009.  Cyndy came in from Sacramento via South West Airlines and arrived at 5:30 and Steve drove in from Narragansett (look it up) to meet her at the Buffalo, New York airport.  Everything went according to plan and we were out of the airport before 6 pm.  Nice when there weren’t any bags to check.

We had decided to tour north eastern Lake Erie, Lake Ontario and Niagara Falls on Wednesday via car, but had plenty of time this evening so we decided to zip down to Lake Erie to see what there was to see.

We backtracked the route Steve had rode, it offered great views of the lake and the conditions he encountered on his way to Niagara.  Lots of stuff to look at along the lakeside, from houses (fun to see the same 8 acre lots marketed as 8 acre estates as we got closer to buffalo) to the beaches and tourist spots.  Steve was amazed how close the beach bars/resort area of Angola were by car, they seemed so far away from Niagara before.  One of the best town names is “Lackawanna”, Steve thinks that’s what the whole country is suffering from.  The lake is a huge body of water, but hardly a boat at all out on this beautiful night. 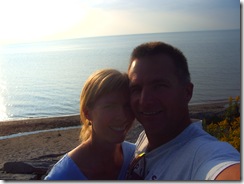 We had staved off our hunger with a couple of Fritos and nectarines but as we turned back to Buffalo it was time to plan our dinner.  Cyndy had already picked out two restaurants to choose from;  One, the originator of Buffalo wings called The Anchor Bar and the other served food with fern parts on it.  We went to the wings place.  It was yummy! (Back down the slippery slope of fried foods for Cyndy)

That was it, to the hotel for a good nights’ sleep.

Wasn’t in any big rush to drag ourselves out of bed on Wednesday, we had already seen Erie, our original morning activity, and the Maid of the Mist doesn’t start running until 9:45.  So we took our time departing, stopping for the continental breakfast just before it closed at 10am and chatting with the front desk clerk who was planning to do Team in Training marathon team next spring.

Headed to the falls to do the full on tourist thing.  Steve wanted to do the Journey Behind the Falls and Cyndy wanted to do the Maid of the Mist boat ride.  The wild card was that the behind the falls tour was from the Canadian side and we didn’t have passports.  There was a possible alternative called an enhanced license, we didn’t know what these were and if ours were it.  A trip to the info center gave us the answer Steve didn’t want so the Journey was out.

The boat ride started with a walk out on a platform that extends over the edge of the gorge and down a 180 foot elevator. 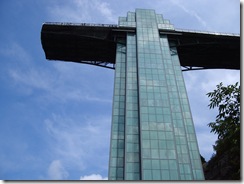 Then we headed out on the Maid and enjoyed a 15 minute boat ride in front of the American falls and Bridal Vail falls then up into the mist of the Horseshoe (Canadian) falls where we held position for about five minutes assuring everyone was good and wet.  We snapped a bunch of photos when the ride was dry but it was impossible in the midst of the mist. 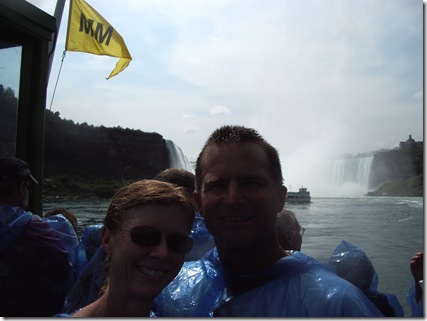 While we were on the ride we saw the boardwalk for the Cave of the Winds, another attraction the lets you walk around the area at the bottom of the Bridal Veil Falls.  We decided this would be a nice substitute.

This walk takes you down to and over the talus and actually lets you get close enough to get wet from splashing falls water.  So down another elevator, this one running through a 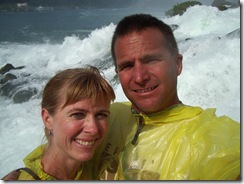 shaft hand cut into the side of the gorge.  We walked around the relatively dry areas and then headed up to the hurricane deck.  From above you can see the mist being carried away from the bottom of the falls, when you stand in front of this you realize that it’s a high velocity column of air being discharged from the falling water.  So the hurricane deck is a combination of heavy mist to flowing water coupled with 40+ MPH wind.  Very unique experience outside of a big coastal storm.  By the way, the disclaimer before you head down the elevator “clothes may get damp” Haha. 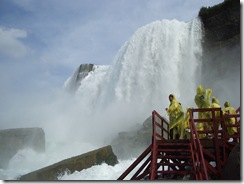 After the manufactured attraction we walked around to the various platforms at the top of the falls and took in the stunning views of the water flows as it headed down the rapids and then flung itself over the cliff.  But like all things this too had to end and we were off to see the lower Niagara River and then Lake Ontario. 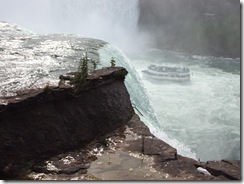 On our way we stopped at The Whirlpool where the Niagara spun in circles as it tried to make a ninety degree turn to continue its journey to Ontario.  Then it was off to the mouth of the Niagara at Fort Niagara.  We could see the sky line of Toronto across the lake but nothing else.  Another immense body of water.  We kept going east along its edge enjoying the vistas and local architecture.

It was getting towards dinner time and we were close to the town of Wilson where there was dinner to be had at the Wilsons Boat House and Marina.  How nice, a marina, boats, dinner, who could ask for more? (A perfect birthday dinner for Steve!) 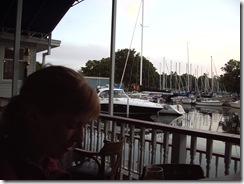 After dinner we strolled the docks and took in one more view of the l ake and we were headed back to the hotel.  Not too late but we needed our beauty sleep. It was so refreshing to spend the day surrounded by water.