Another mighty fun day today.  Cleaned up the campsite and hit the road in a pretty timely fashion.  The bike path ended just a short distance after rejoining it, as expected.  A couple of turns to route twenty to get me on the course for the day.  The town of Ashtabula, as I saw it, consisted of a lot of big box stores on the main route and that was about it.  There was a breakfast place, a chain with Internet, that I had been to before so in I went to get some food and info for the day.

I knew my route for the day but the lake was just over there and I wanted to see it.  I looked high and low to find a little road that went along the shore, but none made sense.  So I checked email and resigned myself to the fact that I would need to wait on the lake viewing.

Back on the road I was getting a beating.  The surface had been ground for resurfacing and there was nowhere for me to go to avoid it.  I just held on lightly and hopped to get past it soon, as I assuredly did.  I appreciated the smooth roads ahead much more the rest of the day.

After crossing into Pennsylvania I arrived at route 5, a road that promised light traffic and views of the lake.

After hours of riding without seeing it the lake finally revealed itself, just over there as I knew it was, but still out of reach.  The view came and went and I continued to look for ways of getting to its edge, when finally I came across Presque Park, a peninsular.  After all the whining I chose to bypass the park because going would have added 20 miles to my day.  I know I’m ahead of schedule, but that’s been revised.  So now I have new expectations.

I continued along only to run into Liberty Park and Marina just a couple of miles after.  I had been making great progress 47 miles and it was only 1pm.  But the shinny objects in the harbor were a distraction.  I investigated every corner of the place, finally touching it, when a couple walked up and started asking questions.  In the course of conversation the guy let me know that there was a water taxi that ran across the harbor to Presque Park, the one  that I had forgone earlier.   From there it was a very short ride across the peninsular to the lake and beach.  I balked at first then ended up running for the taxi at the last second. 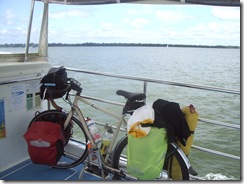 I wheeled up and the captain welcomed me and my bike aboard strapping my bike to the rails for safe keeping.  I stayed up at the wheel house to chat and the captain filled me in on the goings on in the park and on the water.  In a few short minutes we had made the 1.5 miles crossing.  His round trip takes 1 hour so I asked him to hold a spot for me on the next trip.

I headed over to the beach, it was much closer than I had expected, and kicked off my shoes and waded into the water.  I wanted to go for a swim but I didn’t want to deal with more wet things hanging from the back of the bike.  In the end, I went in the water of course.  It was cool and refreshing.  I was cold, finally.  But my indecision had cost me time and I only had 15 minutes to dry off, change and get back to the boat for my return trip.

Headed for the pier and was greeted by the captain and a half full boat, some being bikers.  I heard a couple of noises (moans really)from the other passengers, you know, the kind like, is that overloaded bike going to tip us over????  As we made our return trip the Captain and I chatted some more, he had just taken up biking again at the young age of 61.  He didn’t want to wear a helmet so I gave him the helmet speech.  He filled me in on some more info for my easterly departure from the Erie area.

Soon we were at the pier and I was off.  There were some decent paths to follow on the way out of town and I also noticed “BikePA” signs earlier so I followed along.  Most of the roads had decent shoulders and surface conditions.  As I moved out of the city the traffic became lighter again and the route more of a pleasure.  I was pleasantly surprised by the route through Erie.  I expected to be riding through a busy downtown cluster, it was anything but.

That was the last of the cities for me today.  All of my riding would then be through small towns and rural areas. 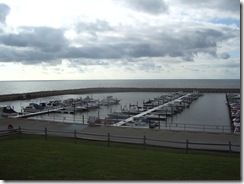 Route 5 continued to take me close to the lake and provide vistas at irregular intervals.  I stopped at another marina for a look and to snap some photos later in the day.

I only had 27 miles to go when I left the city of Erie to make my goal for today and of course I passed some great places that were short of that.  So I continued to pedal along until I reached my 75 mile mark then started looking.  I had been scouting up to this point and it was very obvious that all these vineyards and corn fields back right up to the lake.  So I’m thinking, hey, I can go to the back of one of these areas and camp right along the lakes edge, out of site out of mind.  So that’s what I did. 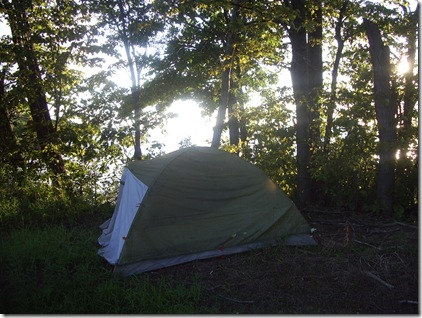 I’m at the back of a vineyard right above the water listening to the waves crash.  Not bad.  This place also has a set of stairs to get down to the water where there was a private beach for my bathing enjoyment.  Took care of removing the days’ filth, then made dinner and pitched the tent right at sunset.  Scurried into the tent to avoid the skeeters and type this entry, then it was off to sleep.