Great ride today.  Continued on the nice roads with low traffic for the most part.  Got out about 17 miles to Fredericktown and found a place to have breakfast.  Came through the door to the clang of bells hung on it.  Got the “ya ain’t from round here” look from everyone.  Never to let that slow me down I yelled hello to everyone and moved on. 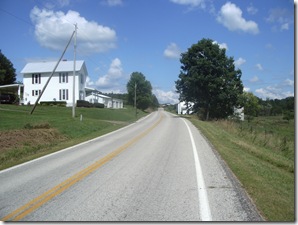 Didn’t rush through breakfast taking some time to complete yesterdays blog and upload photos.  Finally headed back to the bike only to be cornered by one of the guys who were the restaurant.  He regaled me with stories of his glory days on the bike.  Nice guy but he never took a breath to allow me to get the ol’ “gotta get going” in.  It took a half hour or so, but he finally got bored with me and let me go.  I went back in to get water bottles filled when the owner let me know he (the guy outside) does that to every biker he sees.  Would have been nice to know that ahead of time.

The road surfaces were nice and it was pretty hilly for a good portion.  Not those nice pitches like Colorado, no much steeper.  They weren’t too long maybe 2/10 to 1/4 miles, but there were a lot of them, one after another. 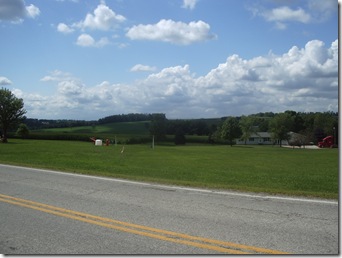 Pulled into Wooster around 3:30 and stopped for lunch at a little summer time diner.  Struck up a conversation with a couple on a motorcycle.  After we went through the usual bike trip stuff.  They started talking about a boat they have at a marina in Erie.  Turns out they have the exact boat Cyndy and I have.  Got some mileage out of that one.  As it started raining I was still ready to talk boats for hours longer but they were not interested in getting wet.  They managed to pry themselves from my grip and get on their bike before I could stop them.  Meanwhile the help had taken the umbrellas down off the deck and I was left to weather the showers on my own.  Hmm, fine, I’ll go!

Stopped at a grocery store a couple of blocks up and re-provisioned, but forgot to fill water bottles.   As I rode through suburbia I kept looking for a spigot to fill bottles (yes Californians, the rest of the country drinks form the spigot) so I would be comfortable were ever I landed.  Finally found a commercial building and filled everything.  Wooster is a nice town with a lot of  colonial architecture.  I have been here before, maybe 10 years (or more) ago I interviewed for a job at Stahl.

Headed out of Wooster for Seville.  That would put me right at the numbers I am shooting for.  Unfortunately they were pretty proud of there rooms, even the campground was over the top at forty dollars per night.  Being cheap I continued to ride and ended up looking at the largest array of non-designated campsites of any evening on this trip.  From churches to empty lots to cemeteries, for one reason or another I just couldn’t close the deal.  In the end trying to find an off piste place to stay was taking far too much time and I was running out of it.

Here’s some residents of a one campsite I looked at. 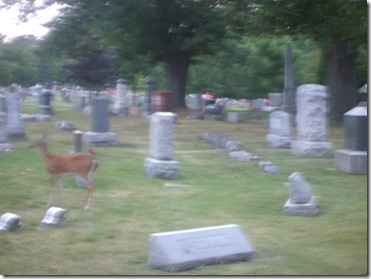 I headed for Medina, just ten miles up the road were I negotiated a room for $19 more than the campground wanted for a tent site and I had a hot shower and a restaurant to eat at while I composed the blog entry.