I had no idea what the weather was gong to be this morning.  According to the weather forecasters last night, I thought the morning would probably be a washout with a late morning departure.  The light coming through the edges of the shades confirmed a cloudy start so I didn’t really get motivated right away as the alarm rang.

When I finally did pull the shade back the sky was clear, the dim lighting the result of a tree right outside the window and the south facing window.  Oops, now I feel like I’m behind schedule.  Hit the road after a large continental breakfast to find a 10 mph south wind.  The wind would stay around all day and gave me a boost 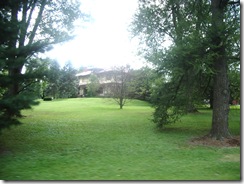 for the most part as the road wound.

Today’s ride was much more like I was used to in Kansas.  3’ or larger shoulder, fewer cars and farmland on both sides.  The terrain had a very nice roll to it changing up the effort level which was much appreciated.

I passed a couple of oil wells out there today and several had the low speed, single horizontal cylinder engines from Arrow Engine. 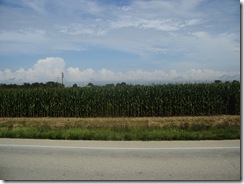 What I find so intriguing about these engines is that they show up at the farm machinery shows in Woodland and Sacramento as antiques and here they are in production.  Took a video too so I could record the puffing and spitting noises these make as the cylinder firing is suspended when the engine is up to speed and only fires on strokes requiring power to restore minimum RPM.  Some of you are wondering why I’m so excited about this, if I have to explain you won’t get it. 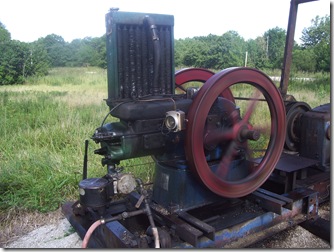 Crossed the Wabash River today which is the border between Illinois and Indiana in this area just 4 miles out of Vincennes .  Stopped to take my required state line photos.  What I didn’t know was that the boarder was also the last time zone change as well.  I knew that the time zone changes at various points in the state, but didn’t find out how the change worked in this area until I checked into the hotel. 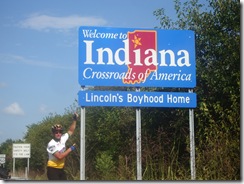 Just after crossing the boarder the highway split into 50 and business 50.  I continued on I-50 about one half mile then decided to ask Alice about the route.  She recommended business 50.  Now I had a bit of a problem.  I needed to get back on B-50 and that required me to go backwards.  The correct course of action would be to go to the next exit and turn around but that would add far too many miles, so I have a choice; ride back on the highway to the exit or hang a right on the exit coming up.  Either way I was going a against traffic and the law, oops.  Figured I would go the wrong way on the exit because it has less traffic and what’s the chance of seeing a cop in the two minutes it will take to complete this maneuver anyway?  Pretty darn good it turns out.  Half way down the exit and a cop drives by on business 50 and stares me down.  Crap, I hope he doesn’t turn around!  He didn’t and I got to the highway and crossed onto the correct side and continued on my way.

Coming into Vincennes there was a lot of construction on the highway, at the exit I wanted and on the surface street below.  In fact, the exit I needed was closed, so once again I pulled a horror.  Down the exit and took a left, wrong side, wrong direction.

Just like yesterday the storm front that has been looming off to the north west was still there.  By the time I left this morning it had filled in overhead, but once again I rode out from under it.  The day yielded to mostly sunny cumulous clouds and remained that way throughout.

After cleaning up tonight I listened to the weather and again the forecast is for rain tonight,.  When I stepped out for dinner the front was visible in the north west sky once again.

I am amazed by the fact I have not been run over by this storm.  Grateful, but amazed just the same.  Looks like the low isn’t moving very fast yet and the rain producers keep developing and moving to the north east.  Will it move by to the north before I make my turn to the north east at the end of the week?  Time will tell.

Today was terribly mundane, probably not a bad thing.

The machinery is still working as expected/hoped/designed.  Can’t beat that.  So you may be thinking, the heavier bike may have been the ticket and I have been wondering that too.  How close to failure do you want your equipment to be engineered?

I still think the frame of our bikes is too heavy.  I see other much lighter bikes out here making the trek without failure.  The Surly Long Haul Trucker I checked out a couple of days ago was probably 8 pounds +/- lighter.  That’s just short of a 9% weight reduction for me, better for less equipped rider.

At the same time I wouldn’t give up the heavier wheel set.  We have heard of several wheel failures and after the Katy and some of the roads to the east of Saint Louis, the extra strength is welcomed.

The disk breaks have also worked very well.  This is the first bike I have had with them and I had no idea how fast they would wear or how much heating they would take without warping.  Again all is fine here too.  I was worried when I had them smoking hot on the backside of Carson Pass, but no issues since.  I still think they are undersized for full load touring in the sierra because of the pitches there.  It may also have been that the wind was with us there as well so extra breaking was required.  We were not that fortunate with the wind thing crossing the rest of the ranges.