My motel didn’t have a breakfast this morning so I had to do some hunting and gathering .  Didn’t end up with a breakfast that you would call “an athletes breakfast”, but then you may not call me an athlete anyway.  After all I’m just out for a morning ride.

I took everyone’s advice and went for the Metro to cross St. Louis.  It was only 15 miles to the river and I questioned the wisdom until I passed by the east side of town, then I was happy with the decision.

Getting to the train proved a bit more challenging.  Alice had proved her usefulness time and again and today was no different.  One problem, the train station entrance required me to go into the airport, not going to happen.  I have no time to deal with the various “tools” I have on board.  I have an easy option, airport east entrance has another station and is very close by.

A security guard directs me and I sort of missed.  After a couple of u-turns I get to the station, just in time to buy a ticket and hop on board.  Before heading out today I looked up the train riding rules for bikes.  It said stand at the rear of the front car, so I hop on the rear of the front car and immediately are told to move to the back.  I thought I was in the back, oops missed that one.  Thankfully it was Sunday and quiet, so I only rammed one lady with my pannier.

I rode the rails across town, into Illinois and stayed on board until I was clear of the city.  Left the train in O’Fallon, a nice suburban stop that was just a short distance from route 50. Here’s the Mississippi.   Crossing out of Missouri into Illinois. 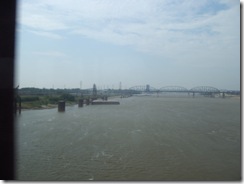 Then it was back to riding.  Wow what a change.  You have to image that for the last 5 weeks the largest town I have been in is Grand Junction and for the last 3 days I have been on a bike trail.  I have now been dumped into a very busy section of town on the outskirts of St. Louis.  I have a tough time adjusting.

I work my way through a bunch of small towns separated by very little distance then I found out from a lady at a gas station that this is the route to Carlyle Lake, a very popular recreational destination.  At this time I am also rejoining my old friend route 50.

She warns me to stay on old 50 instead but as I get to the split, 50 is a nice two laner with a full break down lane.  I stay on 50, turns out to be the best decision.  I have heard people gasp when they find out I ride on larger roads, but here’s the deal.  On small roads there are turn choices and people trying to figure out where they’re going and not paying attention.  On the highway people are settled in and know where they are going, even if they don’t, they have no choice but to flow with traffic.  There is also the benefit of large auxiliary lanes.

In and out of towns, route 50 is very much as it was when we left it in Pueblo.  Decent “bike lane” but much more traffic.  I’ll be on this route for another 3 days.  I hope the quality remains.

Got may first flat today since Grand Junction.  Took the opportunity to relax a bit with a slow repair pace.  Found the rear tire looking a bit worn, was hoping the trail riding would slow the wear, no chance.  Should rotate very soon. Took the down time to get some oil on my far too dry chain.  Couldn’t believe when I watched another rider go past as I diddled around.  A local, but a rider just the same.

Weather is always on my mind and no less today.  The Weather channel has been talking about the jet stream and it’s intent to carry a number of storms through my area with one currently very close.  Leaving the hotel this morning the sky was overcast and when I was waiting for the train it was sprinkling.  By the end of my train ride I was ahead of the storm and somehow maintained that lead all day.

Pulling into Salem tonight I had one of my 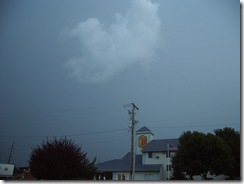 usual internal discussions.  Goes like this: Only been 68 miles today, would like to get another hour of riding, but there are no resources out there.  55 miles to the next town with hotels and no campgrounds around.  If I go, it’s a cornfield for the campsite.  But this isn’t like west of Saint Louis, h ere there’s a lot of traffic and development and I’m having trouble finding a quiet place just to… well you know.

So it was 4 o”clock and I just knew I wasn’t going to make the next town and the weather was still out there, so I a grabbed a room in Salem.  How fortuitous, an hour after I arrived it was raining, with a much darker front sitting JUST to the west.  By the time I leave dinner, it’s raining steady with no end in sight with severe warning all around.  Glad I stayed, I would have been run down… again. 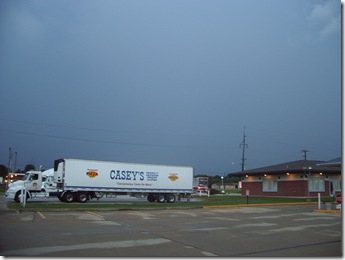 I hope this front comes through tonight and lets the cool dry air in fill in behind or on top of me.  Of course, this means I also hope it is dried out a bit by morning too.

My bike is a mess.  Every inch of it and the items hanging off of it are covered with a light powdery, white layer from the Katy.  I consider cleaning it then realize mother nature will probably take care of that for me very soon.  I stop looking for a hose.