Yesterday marked the first time the humidity had noticeably dropped since we encountered it in Bazine, KS.  At the end of the day it was 84 and comfortable.  I got to the campground, set up camp, took a shower and was able to fiddle around the camp before bed without working up a sweat and returning to the sticky self I was before my shower.  I actually took my sleeping bag out of it’s little bag last night.

Speaking of showers, as I go along my hair does its best to make me get it cut before I make it to the Atlantic.  I have noticed the triple Mohawk starting to form and it’s maintaining this shape even after a shower.  With my head being capped by a helmut 8 to 12 hours a day, I think my little hair follicles have been convinced that is how I want them to permanently grow.  Must have a conversation with hair follicles to correct this situation. 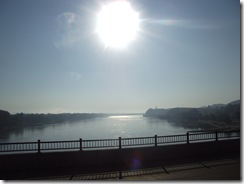 Up and out of bed before the alarm today and on the road before 7:30 I was on a roll, until I ran into a breakfast place right outside the campground.  A few minutes to eat would be a good idea.  Get fueled early and run long.  Stopping!!!

After breakfast I headed out of town, Hermann actually and over the Mo-zur-a one more time, took a couple of photos in the morning light.  Love the water, if it can’t be the Atlantic I’ll take the river.  Got back on the trail and started rolling.

with me.  Certainly more riders out today than I have seen since the other end of the trail.  I’m glad for others for two reasons; I can say good morning and wait for the reaction, it varies from surprise to verbal responses and the second, others clear the spider webs.  These webs stretch the entire width of the trail.  At one point I felt like a spider condo, or maybe a mobile home.  Were the spiders back there flapping around enjoying themselves like a dog hanging out a window.  Where they yelling to their friends “hey look at me WooHoo”.  Or were they hanging on like a kid to the back of an accelerating train wondering how much damage letting go will cause?  We may never know.

Stopped and chatted with several people in Marthasville (at the little trail side depot), while I ate my second breakfast that consisted of two day old cold cuts on squished rolls with melted cheese.  When I say gourmet you can just imagine.  Moved along and spent a good deal of time along the river, nice for the visual enjoyment. 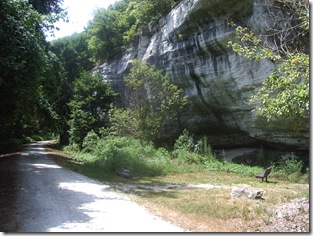 As I head closer to Augusta the trail is spending more time out in the fields exposing me to my ever present nemesis, easterly winds. They’ve freshened to 10 or so today.  In Augusta there is a little outdoor beer garden/open air restaurant.  I can’t resist so in I go for a early lunch.

As I got back on the trail it returned to it’s tree covered self and I welcomed the shade from both wind and sun.  Forgot the sun block this morning, better stop and put some on.  After that I picked up the pace a bit given that the surface was firmer in the shade.

There are A LOT of people on the path now.  I’m maybe 20 miles out of St. Louis and I soon stumble on one reason, a bike rental shop doing a bang up business.  I stop in and chat with the owner for a second, not because of the bikes, but because he was selling ice cream.  As I walked out, there was duplicate (except this one was friendly) of our cat, Ernie, lying on the floor.  Couldn’t pass up the opportunity to play with the him for a few before moving on.

While rolling along again, a turn revealed a new 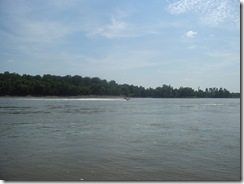 boat ramp with a nice easy pitch, so I couldn’t resist.  Went down, kicked off my shoes, waded in and cooled my legs and arms.  Didn’t jump in this time but I appreciated the cooling water just the same.

On the western side of the Missouri River, just outside of St. Louis I stopped a rider to get some input about crossing the city.  His suggestion, take Metro-Link, the same thing I was told two days ago by another Saint Louis resident.  Two others had bummed a ride.

Rode up further and spoke to another guy Pat and he said be careful in Saint Louis, especially at night.  We rode along at 7 or 8 MPH chatting about all things and disagreeing on most.  But I would take his advice on safety.  Fine, the metro it is.  He stayed with me until I decided I would make the dash across SL today and we went our separate ways.

Up and over the Missouri on the route 270 bridge, where I had a chance to say hello to my fellow homeless, then off the next exit into… I had no idea.  It was time to let Alice work her magic.  Take me to the metro Alice, She quickly complied and I was on my way.  The ride was peaceful as I wound through a pleasantly quiet industrial area and then past a sports arena, ST. Louis Bills or something like that.  Glad it was Saturday and there was no game.

As I came to a turn about 4 miles from the metro there was a flea bag motel for $30.00 on my left.  I pulled over to evaluate my position;  I am tired, I could press on and risk an hour hotel search on the other end or take the room now and do battle with Saint Louis when I’m fresh in the morning.  I reiterate the flats are taking a much larger toll than any hill in the Rockies!  I surprised myself and headed for the hotel.

I continued my social experiment of saying hello or waving to every rider.  I got the Pez a lot.  I got what I have dubbed the Monk Pez which is the head down Pez, like the closing of the Pez container, I got the eyebrow Pez where just the eyebrows are raised, I got the cold stare which you all know from reading this blog means “Howdy stranger, welcome to town!”, I got the little smile and some nuts actually said hello.

For those if you who did your homework from yesterday here’s the answers:

1: 149 you  may have calculated 133 but that is wrong because you forgot to include the fact that Steve is goal oriented and REI is a distraction and the fact that he would MacGyver the tent and could avoid going to REI.  Oh, and St. Charles where I’m getting off is 39.5 miles short of “the end” but that section is not finished yet, so I don’t know why it’s included.

1 Discussion should have covered… goal focused of course!!!

2 Probably but he blew off going to REI

3 It’s not nice to call others insane, shame on you

5 Cyndy says I can’t print my answer for this one.