I woke up right as the eastern sky was brightening and sat up a moment and briefly considered getting going before sanity retook the situation and I went back to sleep.  The alarm went off at it’s usual 7am but today I was already awake.  Took a minute to gather my thoughts then went about picking up camp.  By 7:30 I was packed and ready to leave, that’s right on the bike before 10:30, it was truly going to be a great day.

Another rider was in the camp, turned out to be the guy I waved at back at the beginning of the trail yesterday. He invited me over last night and we chatted while he made himself dinner.  He’s a graduate student at MU in St. Louis and just got to town and decided to do a round trip on the trail.  He is still asleep and will get going whenever he wakes up, truly a student.

It was very peaceful on the trail with light winds and plenty of shade.  Shade is nice even in the early hours because Mo-zur-a has a nasty habit of not cooling off at night.  The trail surface was well packed in this area but I was not making great time, running around 13.4 mph.  I suppose the pace gave me a chance to enjoy the landscape and was even better as the trail began to run along side the Mo-zur-a Riva.

Take a look at the photo of a train tunnel I went through, still had the coal smoke on the ceiling.  It was one of the highlights of the day. 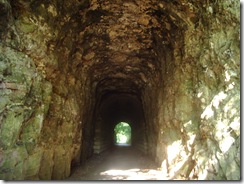 Haven’t been very successful at finding a place to have breakfast along the trail today.  Either they are closed or too far off the path to provide any incentive.  Stopped along the side of the river at Bonne Femme river confluence and had breakfast of turkey and cheese sandwiches.  Surely a stunning contrast to the landscape of one week ago.

Put another hour under the bike and arrived at Hartsburg.  They have a nice little cafe right along the path and I swung in to get an early lunch.  40 miles down and it’s only 12pm.

Pressed on after lunch and the landscape continued as it had.  I feel like I’m on a Disney ride.  Through a dark tunnel then pop out in a whole new world.  Then back in the tunnel.  Fun stuff!

I suppose I need to stop taking things so literally.  When I read about the Katy, it said that the trail ran along the Mo-zur-a Riva.  Well when I hear that I think, I can see the river as I ride.  Well I could in many sections but for the most part it was no where in sight.  I guess along the river means it’s still in the same state.

Not to be thrown by the lack of constant contact. I certainly enjoyed the times when it was in sight and also enjoyed the forest tunnels that shielded me from the persistent east winds that have buffeted us for most of the ride since Pueblo, CO.

About 10 miles out of McKittrick the river showed up again and I couldn’t resist the opportunity to jump in.  For a brief period I was cold, first time since the Rockies, or maybe a pool some time back. 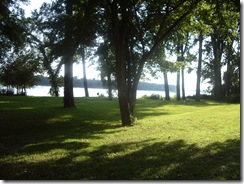 I also felt like the days of sand, sun block and sweat were washed thoroughly away.  Something that the hose showers I have been taking have failed to accomplish.

Ran into a lot of people today including a family out for a multi-day trip camping and enjoying.  Rode and spoke with them for a while, it was nice to find out what others were up to for once.

Ooo, and one other thing I almost forgot.  I have now arrived in the more Bavarian portion of the mid/eastern west.  I had dinner at Trappers Pub in Hermann.  Sounds like hamburgers right?  Nope yummy, tasty, hearty German food.  I waded in more than ankle deep and broke my rule about ordering saltwater fish dishes out of sight of the ocean and it’s fantastic.

Unsolicited advice to other riders: (For reference I was on the trail August, 2009) Don’t stop reading there’s more below.

A heads up to anyone who might read this during their planning for a ride on the Katy.  The state documentation for 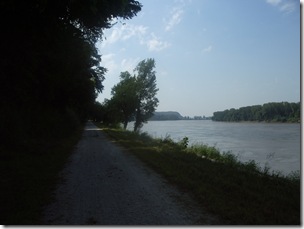 the route is grossly out of date and the resources that are claimed by the towns, in many cases, are either non-existent or too far from the trail to be useful.  In addition if you are an early riser, good luck.  Many of these towns are showing the same pressures of those along route 50 in the desert and I see no possibility of that improving in the short term.  So I can’t see them opening a new pizza place or grocery store in the foreseeable future.

Don’t let this this deter you from enjoying the trail, it has been a wonderful experience and I’m glad I included it in my itinerary.  Just make sure you have supplies on board so that you can skip a couple of towns between eating/provisioning/camping/hoteling.

Take for instance McKittrick, they claim full services they actually have nothing, YUP, nothing.  The town of Hermann, 2 miles to the south has everything and that’s where I am actually spending the night.

I’ve learned a couple of things about this area having been in contact with the locals and the land for a few days;

Here’s todays’ word / guess what Steve will do problem:

Steve plans to ride his bike from Clinton, MO to St. Louis, MO.  It’s said to be 260 miles and Steve wants to back off and do it in 4 days of 60 miles leaving him just short of SL for a 10 am crossing on the fifth day.  When in route to the start, Steve picks up the route 17 miles up the path, shortening the ride.  He also has a piece of crap Mountain Hardware tent that the poles keep breaking leaving him more homeless than planned.  He has the tools to keep it standing (hopefully if it doesn’t rain) for the couple of days to St. Louis.  But is now forced to leave the path early to cross through the south of Saint Louis to go to REI to rant a little and then get a new tent.  He thinks he will leave the trail 56 miles before the end but will now have 22 miles of City to cross instead of being dumped off on the outskirts.  He has currently crossed 60 miles of the trail.

Additional Information (may influence his decisions):  Steve has recently realized that he has left out a 300 mile chunk in his time calculations to Niagara Falls.  But on the other hand the path is next to water which is mesmerizing.