So I woke up alive this morning, or so they have let me believe.  My relocation last night having obviously subverted the towns plans for me.  Thanks to my advanced survival training and some sheets to hide under.  I moved quickly and stealthily through the motel room, quickly gathering my things before being seen (except for the 2 hours I spent on the phone with REI and finishing the blog entry).  But then I see one of the daughters pointing at the room and speaking to another.  I’ve been made.

She comes over the my door and knocks, I swing the door open and acted casual, trying not to let them know I was on to them.  Finished up the conversation and quickly grabbed my things then fled from the room (except for one last check of Mafia Wars). I was in the street pedaling and trying not to look back lest I give away my advantage of knowing what they were up to.  I make it to town and hide in a building, Ok it was a breakfast joint.  Everyone stared at me like they were the people in Invasion of the Body 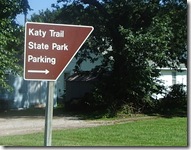 Snatchers that had already been replaced.  I stared them down, don’t show fear, they’ll know I’m on to them.  I casually sat down and ordered way too much food and wrote my supplemental entry then snuck out the door.  I was quick to the bike, except to take the time to upload my entry, and off, but then one of their scouts caught me. 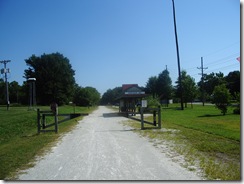 What’cha up to, son?  Running like a  scared school girl sir before someone in this town sucks my brains out, I mean riding across country.  He says he met another guy doing the same thing and he followed him on his blog, then asks if I have one too.  I think quick, is he stalling or are they going to get me on the trail.  I tell him my name is Patty O’furniture, without a blog and ride away.  As I enter  the trail right around the corner, I hear the music change from the fearful “don’t open that door” to the Oooo Golden Retrievers in the tall grass playing, I’m saved.  People smile and wave on the trail completely oblivious to what’s going on in that town.

Finally I’m on the Katy trail. It’s great I’m off the road for a  while and I can let my guard down.  Regular services and a pretty decent riding surface.  there is a rider at the entry and I just say good morning because it’s 10;30 and I need to get some miles under my belt.  About 7 miles further there are a couple of other riders and they want to talk, OK time for a break, been at it almost 30 minutes, whew.  Burn another 45 minutes chatting and off I go again.  Started off slow because of the surface, but in the areas with good tree coverage (most of today’s ride) the trail stayed moist and packed.  Making as good time as on the pavement. 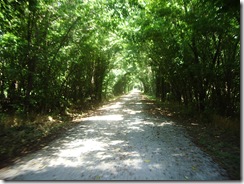 One corner after another reveals a beautiful corridor with trees forming a canopy, then out in the open, then a bridge or two.  The trail takes me along the back side of ranch and farm land.  Cows wading in the water (you know I wanted to join them).  Now this is my kind of landscape. 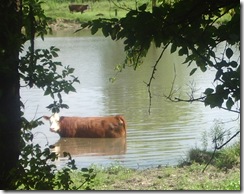 As the miles pass so do the towns, access to their resources don’t seem to be as good as I would have expected.  It’s early and I don’t need anything so the towns slip by with little more than a glance.  then, of course, I begin to get Hungary and now the search begins.  Food is not as easy to get as I had expected, another stretch where many businesses are closed.  The ice cream place, the grocery store, gone.

End up in Boonville for dinner and groceries, it’s a little bigger and seems to have what I need.  Happened across an ice cream store on my way to the grocery, clearly a sign from god, I stop.  Stroll in and find three 30 something guys who were ‘”definitely not from around here” running the place.  They tell me they’re from Las Vagas.  We end up having a fun time speaking in plain uncensored truth.  As we’re chatting one guy asks if I’m hungry, well, I’m always hungry.  He whips me up a sandwich that was just delicious and exactly what I was looking for, On Yeh, so was the ice cream shake.  So one more place that you definitely need to stop by on your Katy trail trip.

Dropped down to the grocery and wandered around looking for provisions… this was much easier when Cyndy did it.  Forgot to grab the nectarines but I was back on the road.

Right out of town I crossed the Missouri River, 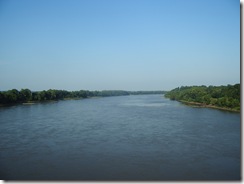 so I had to stop at the middle and gawk and take photos.  Got to the other side and had a bit of trouble getting back on the trail, thanks to Alice once again.  Two or three miles out I run across a very nice campground on the trail.  Ride past determined to get 60 miles in for the day.

Less than a mile up I run across a kiosk with maps and finally pick one up.  Hey, Looks like I’ve already gone exactly 60 miles and there are no campgrounds for 22 more.  Hmmm, that campground is now looking like the right choice. Back I go.  Good choice, fed, showered, camp setup all before 10 PM first time in days.  Early to bed, early to rise, many miles to ride.