Alarm went off at 7 am as usual, picked up camp quickly to avoid any neighbors realizing there is a vagrant next door.  Moved everything over to the picnic tables and proceeded to set up the computer to pay some bills.  Technical issues ensued and caused me to shake my fists in the air once or twice, but in the end it was done and I could move on.

Pulled out my bike clothes for the day (that I washed two days ago) and wow what is that stench?!?!?!  Ewww.  Lesson learned, don’t wash clothes in muddy river, check.  Took them over to the hose and washed them again.  Guess my riding clothes will dry as I wear them. 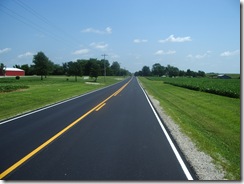 John stoped me and wanted to chat about my trip.  Ok, he couldn’t care less what I’m up to he just found a new ear to bend.  25 minutes later I wedged in a ‘nice talking with you but a lot to do today’ and off I go.  He did give me one piece of info, a breakfast joint.  Stopped in and loaded my carbs.  Now it’s ten o”clock.  So in 3 hours I had ridden a total of 11 minutes and not all in the direction I needed to go.

Finally got some miles under my belt and arrived at the “locals detour” just outside of Fremont and sure enough it was perfect.   I was back on route 2 with no extra miles.  Thanks BK guy!! Stopped at the big Conoco at the bridge closure to have a drink and look back at the closure I had so surely defeated.  Felt pretty good about myself for that one.

After the long couple of days I was having a hard time making quick headway so I had to just resign myself to the pace and get the job done.  Picked up a little tailwind in the afternoon and that helped.  Making some changes to my eating habits to focus more on carbs and less on proteins and electrolytes, hopefully that will help too.  I suppose the less than perfect evening meal last night didn’t really help either.

Another milestone today, I crossed into Missouri.  The area is a beautifully green landscape with trees 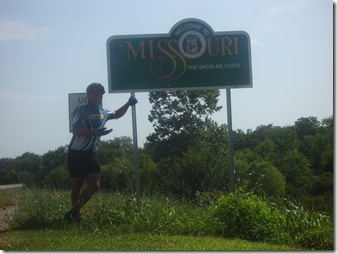 and farmland, certainly more my preference for personal visual enjoyment.  Shade to sit under on breaks, lots of wildlife and for the first time two nights ago, fire flies.  I hadn’t seen them in years.  Brought back so many memories of home.

Stopped at a store on the way out of Harrisonville, MO to get a bit of lunch and a cold drink.  While I was there two guys came in on bikes.  They had just left the Katy so I was all over them for information, especially a better way across St. Louis.  Better yet, a way to totally avoid it.  But they weren’t from the area and couldn’t help. Bummer.  44 miles to my destination off I go again. 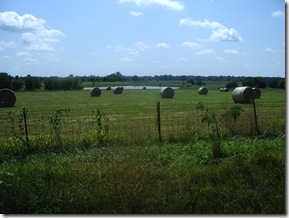 Stopped in Leeson at Jody’s Diner about 12 miles out of Windsor, my destination for today. I wrote this from my dinner table wholly ignoring my food.  Everyone that walked in looked at me for a second then said, “where ya headin’” I tell them, then the questions rollout.  Dinner was a 3 hour mixture of typing, eating and telling the story at least 8 times, it’s very fun to see there reaction, then they get thinking and truly  seem interested in the adventure.

I have been having a hard time keeping the laptop charged without regular hotel stops, so I’ve been trying to get everything done while I eat, if I can find a plug near a seat.  I do get the constant looks as the sweaty guy in the corner pounds on the keyboard of a laptop with the wires and gadgets plugged in all over.

I’m sure you all have read how nice people have been, get this:

The folks at this restaurant I’ve been sitting in for 3 hours have just done it again.  A patron who was asking about the trip called a friend in Winsor and got me a room and shower at a friends’.  Then when I went to pay the bill I handed them my credit card but they don’t take them.  So Tim, the owner, says don’t worry about it send me a check when you get a chance.  Think that would happen in  California?

Thanks Jody and Tim and the entire town of Leeson.  Great hospitality!!