Alarm went off at 7 am, I know it’s not very early, whatever.  Took forever to get camp picked up and food cooked.  Hit the road about 9am.  1.5 miles into the ride I stopped at the grocery store for some more carbs and a nice cold drink of milk.  While I was eating my bounty outside a local struck up a conversation.  In the end, I found out the road that I intend on riding, route 2, in Missouri has a bridge that is closed due to construction and the detour is a bit long, like 30 miles, Huh???  Still need to solve that one. 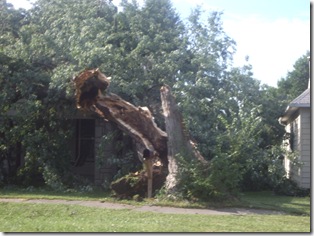 Got underway again and started checking off the miles.  Eastern Kansas is a nice blend of rolling hills and very straight roads.  The trees are becoming thicker and and the various crops are beginning to look as if they were cut out of the forest rather than plopped arbitrarily in the empty plains.

Came around a thick tree line dividing two fields and scared a coyote, actually it was mutual.  He took off down the edge of the trees and kept looking over his shoulders at me and I kept going looking over my shoulder a him.  Was pretty funny looking back at it. 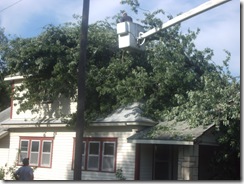 I’m on a route not frequented by cyclists, in fact the girl at the Pizza Hut said I was the first she had seen in the restaurant.  It shows a bit in the way drivers deal with the interruption.  Out of Salina I am taking a series of roads that take me directly to Clinton, MO to pickup the Katey Trail.  Today I arrived at route 68.  It is much busier than predicted and there is no shoulder.  Most people have been very generous but there is not a lot of room.

Stopped in Ottowa for some ice cream.  It’s a fairly big town with lots of traffic and kids running around.  Decided to stay for a while and type this entry, avoid the heat and hopefully see the traffic diminish before heading back out again.

Here’s the question… If I leave this town there is nothing for 32 miles but I have 105 miles to the Katey and I would like to get there tomorrow.  Its 6:30 now I can probably get another 20 miles in before it gets dark but I will be in the middle of nowhere.  Not a problem in the large scheme, but I do like to scrape a layer of dirt before bed.  Hmmmm… What would you do, what do you think I going to do??

The decision and fallout:

Well, at 6:50 I decided to get going, just then Cyndy called and I spent 25 minutes doing tech support on the A/C.  7:15 and I’m out to the bike, headed up a short hill and looked over my shoulder at the sun.  My was it low.  Did a couple of circles in the road… pointed it east.  figured I would get another 10 in and stop for the night before the sun was all the way down.

Started cranking out the miles and found the evening air to be enjoyably cool and still.  I was making good time, why not go all the way to Louisburg?  I can get a hotel there, charge everything up and get a shower and a good nights’ sleep.  Mounted up the lights as the sun went down and kept pedaling.  Did I mention 68 was busier than I expected?  Although the drivers were very generous I did feel a bit uneasy, but off I went.  I had decided on Louisburg and that’s were I was going.

When I was well under way, I thought, Hmmm let’s see what Alice says about accommodations in Louisburg.  Guess I should have thought about that sooner… there are no accommodations in Louisburg.  Nope, not even a campground.  Trying to stay optimistic I focused on getting there and the fact that Alice is not always right about small facilities.  Surely there will be something there, even if it requires some Raid to be comfortable.

Pedal, pedal, pedal, hey there’s the town and they have stop lights, surely they must have a hotel, right.  It was 9:45 at this point and I was in no mood to fuss with cooking so I stopped at Burger King (I know).  Got my “food” and chatted with the folks behind the counter for a while and they agreed no place to stay.  But directed my to some locals in the shop.

I interrupted 4 couples and after I convinced them I was on a bike and I was sane, mostly, and they gave me some static, they provided me some good advice about a campground 8 miles (really 11 miles) from town.  They also warned me about the bridge that was out right after the campground (remember my conversation back in Council Grove).  Turns out the detour is some 35 miles out of the way.  Again, Huh?!?!

Of course now I am looking for alternatives, is the bridge somewhat intact, can I get across during working hours, how about after hours, how big is the “river”, can I walk across it, is there a better detour.  I am convinced now that I have no choice but to ride to the bridge tonight and cross while no work is being done… but the campground is on this side of the bridge.  Uhg, no perfect solution.

But then, out of now where superman, the guy behind the counter is from that exact area and he has the locals detour.  No extra miles and open all day.  I’m saved, now I have options.

As I left BK I was off to cover the 11 miles to the Fremont campground, but I was tired and it was late and I really didn’t want to ride any more.  As I reluctantly pedaled through town I passed a church on the right, hmmmm no room, but look right across the street another church, set back with a great back yard and more good news, a hose.  I heard the angels sing “alleluia”.  Went out to the picnic tables and went about setting up for the night.  Hose shower/laundry, mmmm cool and wonderful, out for the night.