The days’ activities were suppose to be logistics, visiting and resting before Cyndy headed back to Sacramento for a couple of weeks of reality.  So we needed to get Cyndy’s bike packed and going to Niagara Falls and make our way to Denver.

Scurried out first thing on Saturday and packed the bike into the case.  Certainly didn’t look like everything would fit, but 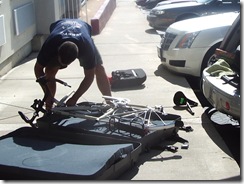 with a little disassembly and squeezing, it went in and we got the straps closed without putting an eye out.  Then it was off to the UPS store to send it on it’s way.  Got a rude awakening when the bill to send it was $150.00  The case cost $45 to get to Pueblo, didn’t really expect an additional 40 lbs would cost $100.00!!  To make matters worse I found some very unflattering reviews of the bike shop in NY that it was going to.  Anyway it’s off.

Now on to some fun.  We went back to visit the Garden 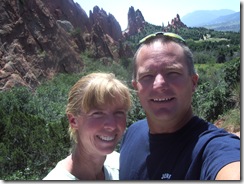 of The Gods, which is a nice stone formation on the west side of town.  As usual we did the ‘National Lampoon’ quick look and photographs and off we went again.

Headed up to Manitou and the cog train.  Drove up to the walking path that goes to the top of Pikes Peak.  Cyndy’s friend Dianne will be running 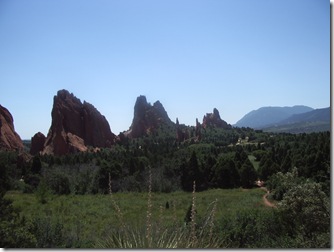 a marathon on that trail in a  couple of weeks… glad it’s not me, those runners are crazy, wink, wink.

Headed back down the hill  to the town of Manitou where Cyndy took a little time to look around the town while Steve caught a nap in the car.  Cyndy came back about an hour later, perfect timing, and announced that they have natural springs just like New Hampshire.  So we filled our bottles with the cool goodness of pure mountain spring water with the added bonus that it was naturally sparkling.

By this time we needed to get going up to Denver where we visited Paul and Karen LeFever.  They are long time family friends of Cyndy and family.  We spent the rest of the day catching up 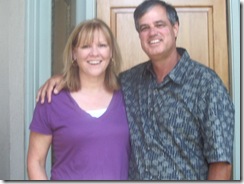 with them and viewing our tour web site a little.  Of course we could tell stories for hours but there were things to see.  We headed over to a local lake were Paul is the outdoor facilities/activities manger (something like that right Paul?)  We toured the facility and then went for a short cruise around the lake in the marina boat.  Was very nice to be on the water for both of us.

The next day we went to the REI in Denver, what a spectacular store, they even have a white water course  to demo kayaks.  But Steve was in search of a chain.  Turns out the spare chain we’ve 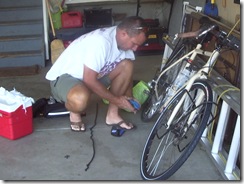 been hauling around for a month is too short.  Would have worked in a pinch but not while we have the resources of Denver at hand.

We ran up to Boulder afterward for lunch at this little place called the Sink.  Then toured a little more… maybe a little too much.  Got  back to their house at 5pm.  A bit late for Cyndy’s 7pm flight that was 45 minutes away.  But in the end everything worked out the flight was a few minutes late and Cyndy made it by the skin of her teeth.

Steve pointed the rental car back to Salina, KS, 400 miles away where he will resume the ride.  Departing the Airport in Denver, his goal was to get within two hours of Salina, KS.  A quick calculation and he had to drive until 12am, no problem.  Zooming along at slightly above the wonderful 75 MPH speed limit he reached Hays, KS right at 12am, 90 miles out of Salina.

Pulled off the highway to find a place to stay and what is there to see but a Wal-Mart.  For those non-campers out there, Wal-Mart allows people to camp in the parking lot overnight.  Drove through the lot and found 10-15 others, mostly motor homes but some vans, and that’s exactly what Steve had planned for himself, sleeping in the back of the old PT Cruiser.  The parking lot was very well lit so he went around back and found a Semi Trailer to park behind to block out some of the light.  Kicked out the bike and cooler, through down the pad and out like a light.