Slept great in the back of the “camper”.  Was woken by the alarm at 7am and got right on the road… after a little MickyD’s breakfast.  Paid for that all day.

Arrived at the rental car place at 9 am, right on schedule.  Repacked my bags, hung them on the bike and worked my way out of town via the residential streets thanks to Alice.  Joined Old highway 81 then hung a left on state route 4.  The route started off busy, not because of traffic, but because of construction blocking the right side of the road.  Before too long I was beyond the town and construction.  The road turned into the familiar Kansas conditions that we had enjoyed so far.

About 20 miles out I noticed a large black sky developing to the north west. I didn’t think much about the cloud other than, “better keep an eye on it so I can make a decision on action if necessary”.  While I was conscious of the weathers’ presents, I had no speed/direction information.  It looked to be a couple of hundred miles out so I guessed 30 MPH, so I had plenty of time.

Twenty eight miles out I went through the little town of Gypsum.  One guy getting into his car yelled over that the storm was coming and that I needed to be careful.  I flippantly said I was hoping to outrun it.  Another guy pulled over a few hundred yards ahead and gave me the same warning, with the addition of hail… That got my attention.

It still looked to be well to the northwest and I calculated that I had a couple of hours of riding before it would catch me so I continued on.  About 45 minutes later I was being run down like a squirrel on the highway. 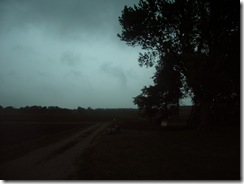 The leading edge was approaching fast and it was dark.  As it got very close it turned this ominous greenish/blue, I was now nervous. I had just passed a house and was climbing a hill to look over the peak for cover when I decided it was just too close for comfort.  I turned around and headed back for the house I had just passed.  The winds were picking up quickly and when I turned I would estimate 25 to 35 (darn, first tail wind in days) out of the west.  I took refuge on the patio of the house and knocked on the door, no one home.  Went out to the barn, still no one.   No problem the porch would give me the cover I needed as long as the wind direction didn’t change during the storm.

I setup my bike under the patio and unpacked my 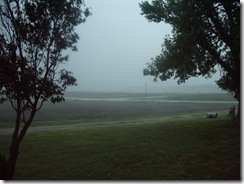 goodies to snack on then took up residency on the patio chair giving me a front row seat to the show.  I alternated between sitting and wandering around the side of the house to watch the progress of the storm while munching my goodies.  The panic stop was critical, 5 minutes after stopping. this storm came through with hurricane force winds, 80-90 MPH according to the local weather folk.  At the time I was thinking wow it’s really blowing out there when I guess I should have been thinking “is there a tornado associated with this?”. 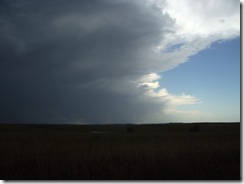 When the storm arrived it had a very vertical front and it went out the same way.  The back of the storm was a giant horse shoe with a vertical wall and when it passed there was not a cloud to be seen behind it.  Anyway it was just a big bag of wind and not much rain and it blew through in less than an hour.  I was back on the road.

Shortly after returning to the road I began to wonder if I could have stayed out and enjoyed a 80 mph tail wind?  I wonder how far I could have gotten at the speed I would have reached.

There are communication relay stations regularly placed beside the roads we have been riding.  Nothing more than small concrete buildings with power service and gensets outside.  They all look exactly the same with the same configuration.  Well today I passed two or three more of these after the storm and all those generators where running.  So there was a huge swath of geography with no power as a result of the wind.

As I continued, I saw knocked down trees and power lines for the entire length of my ride.   I arrived in Hope with an well earned hunger so I stopped at the only place to eat, another little gas station/fast food joint.  The C/O out back was still running on generator and power had just been restored to the town.  There would be no pizza for me because I was too impatient to wait 20 minutes for the oven to re-warm.  So I microwaved a sandwich sucked it down and went on my way.

Arriving in Council Grove around 6pm, I spoke to the local police and they directed me out to the local lake for a camping spot.  The workers were already out cleaning up the streets and other areas of downed trees/branches and there were a lot of them.

I headed out where I was directed and road down a dirt road to arrive below the dam.  It was a nice quiet spot with a small grove a trees and turf for me to pitch in.  Like town and much of the ride today, this park is covered with downed trees/branches, in fact my spot is surrounded by broken branches.  I have no idea if I’m in the right area, I am up against the dam as directed but this is definitely not a campground.  I’ll just continue to practice being invisible and call it a night.