Today is the beginning of a transition for our tour.  As most of you know Cyndy was not able to get the time off to complete the full tour so she needs to be back in Sacramento on Monday for work.  So we rented a car and will be back tracking to Pueblo to pick up the bike case so her bike can be shipped forward then we’re on to Denver to ship Cyndy back to Sac (no box to ship her in).

We’re back tracking because we planned to make Pueblo in 4 weeks, 50 miles a day worst case planning.  But we did much better, arriving in Pueblo 7 days ahead of schedule even with taking a couple of side trips in the high country of Colorado.  Cyndy wished to continue and Steve certainly didn’t mind the company making forward progress so off we went.  Salina, KS was 400 miles out and reachable in the 6 days we had to ride and had a sufficient supply of rental cars to allow us to handle logistics.  Would have liked to have made it to Kansas City but head winds prevented us from going that far.

So after this weekend Steve will be driving back to Salina to continue on to Niagara Falls on his own while Cyndy resumes her responsibilities on the home front. At least for a couple of weeks.  She will rejoin Steve in Niagara Falls and finish the last 600 miles with him.

We ran into The Great Divide bike shop (they have been holding the bike case) 45 minutes before closing to find out they couldn’t pack the bike until tomorrow afternoon.  Surely not going to work, a little repacking and the case is in the back of the car along with our two bikes and all the bags.  We’ll get to cramming the bike into the case tomorrow.

We also ran to the REI in Colorado Springs to get the tent pole repaired so we can use the tent again.  It broke the other morning when we were getting up at Elaine’s in Bazine, KS.  They had everything it needed and did the work for free.  Also let Steve use a pedal wrench to remove Cyndy’s pedals (on her bike, Cyndy doesn’t actually have pedals), one less thing to do tomorrow. Yay, REI!!

We proceeded to drive up and down route 25 to find dinner and a hotel.  Back and forth over the same stretch of highway.  Had dinner at a local brew pub.  Good eats and Steve had fun bantering with the waitress. Found a room in Colorado Springs at the America’s best value Inn, seems to be our favorite compromise.

Today has reconfirmed a few things:

Some other interesting Stuff:

We saw an old single wheeled trailer (single wheel in back that pivots, two hitch points) that brought back childhood memories for Steve.

We bought a styrofoam cooler packed with ICE, a gallon of milk and snacks to make sure we could offer some to passing bikers.  Have only seen two cyclists to offer them goodies and both refused.  So we are eating the snacks.

Each of these small towns has a grain silo as a part of their town skyline,  it also helps in identifying the location.

Oh my, as I write this we just had to take a moment to 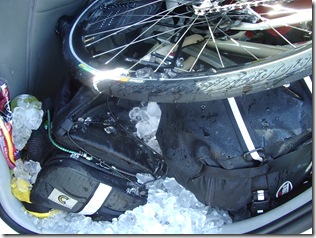 clean up our wonderful cooler that just ended up upside down as Steve took a turn…so much for my ice, guess we won’t be using the ice to fill up our bottles now that it is back in the cooler off the rental car floor and door pocket!

Steve was right, The hot prairie does look much better from the comfort of an air conditioned car going 80… oh, I mean 55.