After watching the weather channel for four and a half hours and with  checkout time looming, we decided to take the plunge, perhaps literally.  By the time we got under way it was a little after 11 am.  Although the ground was still covered in puddles, we stayed dry thanks to our tire fenders and it never rained again.  It was a mild challenge departing town on the partially completed streets with construction, barriers and sand all over.  We were even detoured onto the sidewalk in a number of places.  Surely this wouldn’t last long and it didn’t.  The town was the largest we’ve seen since Pueblo, Cyndy kept wondering what we missed in here, any sights to see? 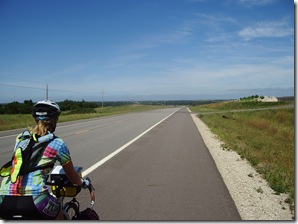 Just east of town our route took us off Hwy 96 on to 156.  Some non-riders we spoke to in Great Bend had winced at the idea of riding on 156, saying it was a highway and they were right.  It was a beautiful highway with a nice wide shoulder and smooth surfaces.  It made for a great riding experience.  We stopped at the Cheyenne Bottoms wetlands, not too many miles out of Great Bend, to enjoy the view and a snack.  The sparrows had made a colony on the underside of the patio cover,  there was quite an exodus when we pulled up.  We only stayed long enough to read the plaques and munch a little, for the birds’ and our sake.

A short time later we found a service station in Holyrood (no not Hollywood) where we went in for a drink.  All eyes were on us as we walked through that door…we weren’t from around here for sure!  Somehow the ice broke and folks finally chatted with us and they turned out to be quite nice.

Don’t miss the smoking in public places thing at all and don’t realize how nice its absence is until you run into it.

On we traveled with the winds staying much calmer than predicted.  The landscape turned much greener and hillier with more and more trees and lots of grazing land around.  We still get a kick out of the cows in the fields.  Every single one will stare us down as we pass by. There were several in a corn patch that looked as guilty as a kid with their hand in the cookie jar.

As we continued along Steve decided we needed a break to check tire inflation (hadn’t been checked in a week, tisk, tisk).  While we were pumping along a guy turned around to check on us.  His daughter had just completed Ragbrea and was interested in making sure we had all that we needed.  The kind generosity that we always appreciate.

At Ellsworth, about 50 miles out we stopped at another diary Queen for ice cream.  Cyndy is sorry to say their soft serve just isn’t up to par.  While Cyndy was being unhappy with her ice cream Steve did more online research and reserved a rental car.  While he was online his Dad Skyped him so he went outside to chat.  When Cyndy joined him outside the agenda negotiations continued. We had been trying to decide if we were going to continue the last 28 miles into Salina or stay in this town.  We decided to finish up the ride.  Surprising to Steve thinking that Cyndy would want to savor the last of the trip.  It will be nice to get into the car having had a shower. 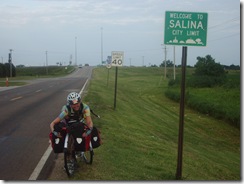 Made the turn onto route 40 east, a road that continued to present great surface conditions.  The 28 miles to Salina was a nice mix of rolling hills and green valleys with cattle and goats and tall trees that helped reduce the cross wind.  We took a right on west Crawford St. for the last 3 miles.  This road was exciting as we anticipated pulling into Salina, the town being the (approximate) geographic center of the country, according to the locals and Cyndy’s stopping point for this portion.  This is also where Steve picks up alone.  Mixed feelings about the transition but there is too much to do to get to focused on it.

Stopped in a truck stop just west of the route 135 overpass at a truck stop to get our bearings.  Made some phone calls and arranged a hotel right over the highway.  Also spent some time debriefing to a couple of gentlemen who where interested in our trip.

Come too find out the motel was right across the street from Enterprise rental agency, how unexpected.