After waking before 6 am to a calm morning at the farmhouse Cyndy went to unzip the tent and snap, the top pole cracked!  Good that we only have one more overnight on the road before our return to Denver for Cyndy’s flight back to Sacramento.    Looks like a trip to REI en route to the airport is in order.  Oh well on with our day.

Dan, our host, had gone out to the fields this morning to pick fresh corn for us and Elaine boiled it up.  Fresh corn on the cob, blueberries and cereal for breakfast.  Steve got his own quart of milk, not much better than that.  Our hosts, the Johnsons, were so nice and down to earth.  It was a pleasure to share our morning with them.  Although we needed to move on we couldn’t leave before playing with the golden retrievers. 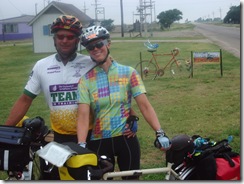 By the time we were ready to go at 8 am there was a fog that had rolled in and the winds had picked up.  This was our first exposure to high humidity for this trip.

The folks on the tandem didn’t wait for us to leave this morning.  They were on their own schedule.  It’s too bad, because of the wind it was pretty much it was a heads down and pedal day.  Another rider would have been nice to share the load with.  We hit light rain for a short time this morning and the cooling was actually welcomed. 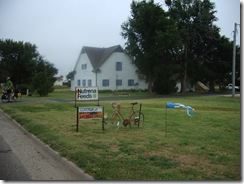 On the way too Rush City we caught up to the Tandem and a short time later we arrived in the town, a four corners actually.  We were all counting on a snack stop here but contrary to documentation, there was no food or drink available, so we ate what we had and whined a bit.   Small towns can be deceptive in terms of whether or not there are services.

As we sat at this corner eating, we new full well that this was a huge transition for us.  This was the point where we would be leaving the well traveled Adventure Cycling route and venturing  off on our own.  No more bike tourists coming the other way to chat with, no pre-published maps with all the info.  The folks on the tandem would be heading south sticking to the route.  After chasing them for so long it was sad to see them leave so quickly, especially when they’re such a good wind block.  Marcus was staying on 96 heading for Kansas City.

We were also debating on splitting north at this intersection.  We were heading to Salina to collect a rental car and had several potential routes.  In the end we decided to continue to Great Bend.  Given the wind, that turned out to be the best decision.  So on we went with our third rider.

There were little towns between Rush and Great Bend but nothing with food so we kept pedaling and eating the rations we had on board.  The wind freshened to 15-20 on the nose and we had no choice but to love it. 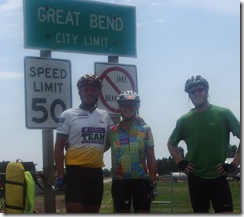 signs for the Great Bend city limits.  Coming into a new town is always a surprise and the decisions surrounding where to eat can be a challenge.  To our left big ice cream sign high up in the sky, to our right Chinese buffet (remember the two guys and Cyndy).  Ultimately we went for both and proceeded to blow the rest of the afternoon.

It was a challenging day that was cut short by the adverse conditions.  We were tired (of the wind) and decided to call Great Bend home for the night so off to find a hotel room and get settled.  Marcus wanted to get some more miles in and he took his leave after lunch.  Thought he might rejoin Steve for the Katy Trail in Missouri, we’ll see.

Of course there were more trees today along with lots of crops but we didn’t really get a chance to appreciate it due to the wind.  Nor did we get to enjoy the rolling hills as it took almost as much effort to pedal down the hills as up.  It was nice that Marcus was still with us to share in pace lining.

We haven’t had a good enough connection to upload pictures for the last couple of days but we wanted to share this view from the CO/KS  border.  Watch closely, there’s allot of detail and visual excitement here.

Ok, maybe not, but I’m sure there’s something out there.

Needed to get a layer of grime off the bikes so got some cleaner (biodegradable, phosphorous free, all natural, fair trade, organic, no child labor, not tested on animals) and a tooth brush and went at it after dinner.  They hadn’t been cleaned since Grand Junction.  We can really accumulate some dirt in a couple weeks.