Today we finally met East bound riders!  Marcus, from Chicago just graduated from college in Denver, joined us for the days’ travels.   We had a bit of a head wind so the company helped the miles click away. He joined us for the entire day’s agenda including breakfast in Scott City, the impromptu grocery store picnic and convenience store snack in Dighton, and the local swimming pool in Ness City.

We woke to a cloudy morning that threatened a bit of precipitation.  We went about our morning duties including trying to get the tent dried before packing.  With breakfast eaten and most items packed it was time to roll up the tent dry or not.

We took the back way out of town that lead us behind the fairgrounds and onto a dirt road that Cyndy thoroughly enjoyed.  At the end we turned right and we were back on route.  Within a few minutes the clouds were letting go a heavy mist so Steve stopped to pull covers over the non-waterproof bags.  This is when we heard Marcus calling from behind.  We waited for him to catch up and went through the usual formalities, of course, inviting him to join us.

As we pedaled the day cleared and eventually 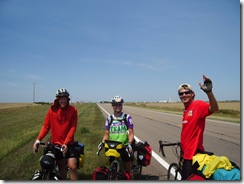 encountered another westbound rider.  This gentleman named Christian, was from Frankfurt Germany.  We stopped for a long chat and he wanted us to tease the riders behind him who had left him behind the day before now that he was ahead.  He had a trimmed down bike with no front loading and a pleasant carefree way.  He was the one who insisted that graveyards were the place to stay.

In Scott City, after a bit of a search, we stopped at Chaparral Restaurant & Club‎ for an early lunch.  This was a fairly large town relative to what we’ve experienced so we actually had a choice of restaurants!

Up the road a little further we stopped 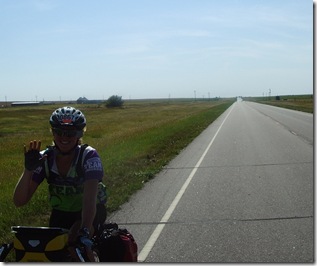 in the Town of Dighton for lunch.  We ran into the grocery store and bought stuff to make lunch then proceeded to eat most of it there.  Outside of the front door we had made ourselves at home in a tiny sliver of shade beside the building.  It was here that we assembled and consumed our bounty.  For some reason, probably ice cream, we went to the convenience store across the intersection and found indoor seating where we could have spent our lunch time.  This was something to record in the memory banks; most of the convenience stores out here have seating too, don’t stand out in the heat!

We pushed on and arrived at Ness City in the early afternoon.  It was still warm and a dip in the pool seemed appropriate. 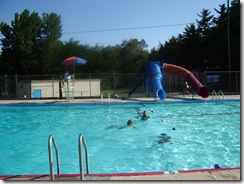 So that’s where we went.  Blake, a young local,  practically attached himself to Steve as soon as he pulled up to the pool fence.    We hopped in and enjoyed our time in the pool.  It was so nice to frolic in the water!  Blake, it turns out had a brother Brandon and the two wanted us to play along so we did and it kept us occupied as we swam around. In the course of conversation, Steve realized that this was not our stop for the day and was mighty disappointed.  Out of the pool and back on the bikes for another 20 miles, what a let down.

We pulled into Elaine’s Oasis farmhouse where she and her husband have a farm and rent out space to traveling bicyclists.  They invited us in like we were old friends, gave us run of the kitchen and bath facilities in their home including the laundry. Elaine will have breakfast set for us in the morning.  It was expensive but peaceful and pleasant.

This is where we finally caught up to the tandem that we’ve heard about for the past couple of days.  A retired couple from New Hampshire, travelling west to east.  They are taking their time, in no big rush to complete the trip doing 60 miles or less per day.

This location seems a bit more appropriate for camping than last night in Leoti. There it was just strange to be camping in the city park and to use the restroom around the corner at the local hospital.

Today’s route has been the most homogenous, nondescript section of the ride we have been on.  The terrain was grazing and corn on both sides for the entire day.  So plain that we hesitated to get many photos as then tended to be indistinguishable from each other.