Up and out fairly early this morning then stopped by the gas station/grocery store to scrounge whatever we could.  This place was owned by the guy that stopped by last night so the boy, Blake, came shooting out on his little bike when he saw us.  He went about entertaining us with bike tricks, riding around us and showing his best stuff.  Then he went in the back to find his helmet (last night we suggested he wear one).  We watched a couple more tricks but once again we were on our way.

Started with a little breeze behind us that got us off to a great start.  Ran into a group of 4 riders, 3 of them Brits.   The third group in a row with Brits.  They had heard about the others from riders ahead of us, but had not been able to catch them.  Spent a good 45 minutes trading tips.

25 miles down the road we stopped in Eads, CO for breakfast and stuffed too much food in, but we were fueled. 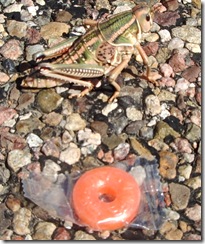 Made another stop in Sheridan Lake for our regular ice cream snack.  There had been conflicting information on the existence of this store.  It did, in fact, exist and gave us an appreciated cooling/snacking opportunity.  The light tailwind continued and before we knew it we had reached the Kansas border, our first milestone for the day.  Stopped for a picture and a 360 degree video to show just how desolate this area is.  But at the same time, the quiet makes for good riding.  Kansas roads are wonderful so far and the drivers very generous.  Almost every driver giving at least the top of the steering wheel half hand wave and most move to the other side of the road when they pass.

Stopped at Tribune, KS for a little lunch at a truck stop.  Mmmm, Yummy truck stop food.  By this point the temperature had reached 103 and neither of us were excited about getting back to it, so we procrastinated for an hour or so.  Chatting with the UPS driver as he came and went several times.

Reality finally caught up with us and we headed back out after stuffing our water bottles, gloves, pant legs, helmet, and camel back full of ice.  Other than the heat, today’s ride has been very enjoyable. 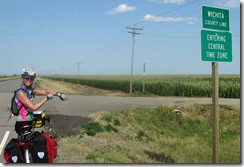 The tail wind was still mostly there.  A bit up the road we reached a second milestone today, we crossed over into central time from mountain time.   Just a short hop up to Leoti, KS for our overnight.

After a stop at the grocery store and the police station (for directions), we were able to make the town pool for a quick dip and shower before it closed.  The girl who was running the place was very generous and was not in any rush to turn us out even though 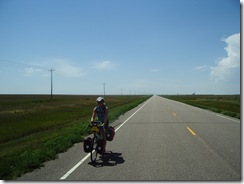 we were the only ones in the facility.  She was even knowledgeable about the cyclists and the usual behaviors, so she provided some direction to make our camping more comfortable. We returned the favor by clearing out by closing even though we were enjoying the cool water.  Nothing like floating and feeling the water after a physically demanding day.  The shower didn’t hurt either.

Tonight we camped at the city park right behind the pool with clearance from the local police.  Apparently this is a common thing along the bike route, staying in the town square/park.  It’s so very vagrant.  We pitched next to a covered picnic area and went about our usual 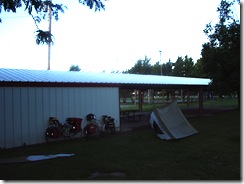 chores with locals walking by with their dogs.  The hospital next door was open all night and would let us use the facilities.  There was even a power receptacle on a pole behind us for Steve to charge the computer.  All we needed was a shopping cart!

Since leaving Pueblo the terrain has been small rolling hills, enough to keep up the interest, but not causing much of a slow down.  Just for reference, with today’s tail wind of 5-7 MPH we averaged 18.2 mph and finished a century in 5 hours and 27 minutes with fully loaded bikes.  Up until this point we had been averaging about 11 MPH.

Dinner was pretty dismal, several botched attempts and messes with the Knorr’s pasta dish.  We learned not to put the milk powder into the pot before the water boils or actually, nothing in the pot except water until the stove is turned off.  At least there were fresh mushrooms and strawberries for dessert (since we already had 2 soft serve ice cream cones apiece earlier in the day!)

See more  photos of this leg