After a very relaxing day off in Pueblo and at the Abriendo Inn we had to get moving again and that we did, but not before another tasty breakfast courtesy of Pamela.  She also sent us 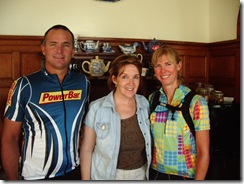 off with goodie bag of GORP complete with dark chocolate M&M’s and craisons.  Of course enjoyed chatting with the other guests as well.

Shoved off about 9am through the south end of the city and out route 96/50 east.  Great surface and wide shoulder.  96 turned off about 17 miles later and we continued the entire day on a nice quiet road through several towns and  plenty of farmland.  We stopped for lunch in Ordway, then 5 miles further in Sugar City we saw bikes outside of a restaurant so we stopped to talk with some other cyclists.  Then the big push out to Haswell.  Enroute, we ran into another solo rider from England 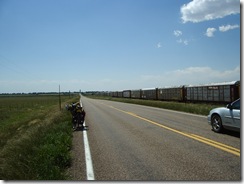 who was San Fran bound.  We chatted with him for 45 minutes.  Today we encountered total of nine westbound bicycle travelers.

There were railroad tracks that ran along side the road for the full length of highway 96 so far.  We were floored by the number of automobile transport train cars that were idled on the track.  15 miles of train cars parked 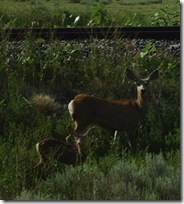 end to end.  Another, unpublicized victim of the automotive meltdown.

Today was our first foray into the flatlands, we enjoyed a tail wind for the first half of the day and headwinds for the balance.   The problem with flat lands is that there is no rest from the wind and no downhill to recover.  Plenty of open space and prairieland.  We did see a doe and fawn today and heard plenty of locust.

We were tuckered out from the

heat and found a park here to camp at tonight with a great water spout, covered picnic tables, and grass.  After dinner we had company as a father and son (Blake, 8 years old) regaled us with tales and good cheer until the mosquitoes drove us into the tent.