Actually got off to an early start today.  Up before 6am and on the road before 6:30.  We woke to a crystal clear morning with light winds, 45 degrees and beautiful views all around.  The river was steaming and the flow of the water was the only sound to be heard.  It was so quiet we could hear the rocks tumble in the bed of the river from time to time.  What a wonderful place to wake to.

Winds on the road were calm and we shoved off to our first stop for the day to get breakfast in Cotopaxi.  We arrived a little before they opened so we waited patiently eating granola bars and planning the day.  Should we go river rafting or continue on?  The lady opened right on time and before we knew it we 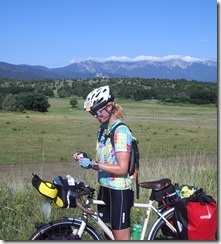 were eating bacon and eggs amongst the hardware and musical instruments.  Grabbed some bananas on the way out.  Now all we had to do is decide which way to go.

We could continue on route 50 and enjoy a mostly downhill ride to Pueblo (73 miles) and have to deal with Colorado drivers or we could take 1A, the road right behind the restaurant/hardware   store/deli/gas station/grocery store and enjoy a quiet road with 3,500 feet of climbing.  There will be plenty of flats coming so we chose the climbing and quiet.

As usual the small side roads yield the best experience. 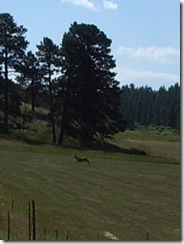 Quiet roads with a mixture of pasture, forest and mountains.  We passed at least 6 four point (8 point depending on the coast you’re reading from) bucks feeding in the meadows.  We have also been stunned by the number of hummingbirds in the area and their habit of hovering within a couple of feet of us.   They are well trained to use feeders and our plunger on the stove looks just like one, so they come in and poke at it.  It’s happening so much we’re starting to feel bad about it. As we ride we can also tell they’re around because they sound like George Jettson’s car (a cartoon look it up) when they fly.

Stopped in Westcliffe to grab a bite.

Ended up getting pizza at Pizza Express.  Nice people and good food.  The owner, Mark, served us and we got to talking about the trip.  Turns out he has done some touring and we chatted about the various trials and tribulations of making this all happen.  The place is for sale if you have a burning desire to live in a nice section of Colorado.

When we were pulling out from lunch a lady in a pickup stopped us and wanted to know if she could do anything for us.  She was from New Mexico and a biker, but wow, right off the street, such generosity from complete strangers. 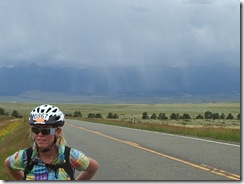 1400 feet, the wind was at our back and the clouds came in cooling the day from 84 to 62.  Most enjoyable.   When we were out about 5 miles from the top the same pickup lady stopped by again to make sure we had everything we needed.  Again, WOW.

We reached the summit, where the wind had picked up to +20 MPH.  Stopped to enjoy the view and call Steve’s parents to say hello.  Now our descent to Pueblo through the San Isabel Mountain area.  This took us through an amazingly beautiful valley that stretched for miles.  Unfortunately we were going to fast to really appreciate it.  Check out the video of a portion of the descent.

At one point in the descent, after the video was taken, the valley narrowed and the turn radii became much shorter to the point that warning signs were posted for motorcyclists.  Stunningly enough, on the turn right after the first sign there was a motorcyclist down.  It had happened long enough ago that people had stopped and some first aid had been offered.  We stopped and Steve offered his first responder talents but was waived off.  These folks were a little bloody and scraped up and had not been wearing helmets.   Unfortunately, no one looked trained but the patients said they didn’t want help.  I took no for an answer and we continued.  Within fifteen minutes two ambulances passed us, Steve wondered what had changed.

Shortly after we encountered two west bound riders pulling trailers.  The first guy had no interest in talking never mind stopping.  The second guy and Steve exchanged some info but only what could be accomplished while still riding.  It was a short conversation.  Can’t say we blame them.  This was there first taste of the mountains and they had a long way to go this evening.  Oh, and they were on the up hill. 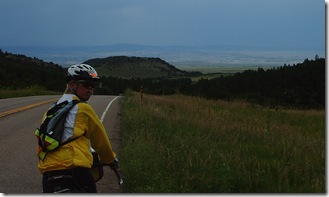 As we continued our descent the pitch flattened and the valley widened, revealing a panorama of the great plains.  This was our first exposure to what lie a head and there was some anxiety.  We had been so concerned during the planning process about the climbs and making the schedule to this point.  In reality the execution of this part went far better than planned with us arriving 7 days ahead of schedule even with two play days.  Now it was on to the flats with the possibility of wind and heavy weather.  Entirely new variables.  But we were here, so be it.

The wind continued to push us along the valley floor (I guess they’re called plains now) then we ran into another couple riding east a number of miles into the flats.  They had left the east coast some number of weeks (months) earlier and looked haggard.  They said they had been buffeted by head winds most of the way and they looked tired.  They have our thoughts and best wishes as we enjoy the tailwinds.  We had the advantage most of the way into Pueblo.

Arriving in Pueblo we were a little concerned about the appearance and the stories of gang problems here. So instead of camping we were heading for a name brand hotel, just to be sure, when we passed a well kept Bed & Breakfast, the Abriendo Inn.  We made few calls and decided to try out the Inn.  Once again we were greeted with open arms and welcomed by the owner, Pam and her assistant.

While chatting with Pam, another couple, Ben and Liz who were staying at the house, came to chat.  They are cyclists doing the same route east to west.  After sharing stories for a while we ended up going out to dinner with them and Pam.  Pam drove us, it was the first time we have been in a car in 3 weeks.  Very pleasant evening with everyone. And we finally had that post ride sushi dinner!

Once again we have found a business that truly values their customers and we highly recommend the Abriendo Inn if you happen to be in the Pueblo, CO area.

After zig-zaging across Colorado, we made it to our original first destination stop.  It looks like we will be continuing on, heading East together for the next week.  Tomorrow we will need to do some homework researching areas to pick up a rental car in the next few hundred miles (to bring Cyndy back to the airport in a week).