This is coming to you from the wilderness on top of Monarch Pass at an altitude somewhere above 10,000 feet.  We ducked off the road in the late afternoon in a gorgeous plateau a mile short of the summit.  We avoided one shower and a second was coming with lightning.  So here we are, on top of the world just short of our highest pass of 11,300 feet.

It was another casual riding day, getting a full nights sleep at the International Hostel (much more posh than Cyndy remembers from 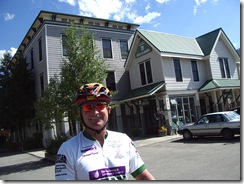 college days) and a filling breakfast in town  at the Paradise Cafe: buckwheat pancakes with blueberries, bananas, almonds, walnuts & sesame seeds for guess who and corned beef hash for the other half of our party. We headed out around 10:40 to take the easy 28 mile downhill back to Gunnison.  It was a bluebird skies day and neither of us really wanted to leave such a peaceful setting.  But we did and slipped down the hill arriving in Gunnison about 1.30 hours later to a yummy chocolate milkshake and peach by the river, then grabbed some groceries to make lunch and we were back on the road.

When we turned onto route 50 the wind was with us at about 20 MPH and my did we enjoy the ride.  Stopped once for a snack on our way to Sarge nts where we planned to camp the night. 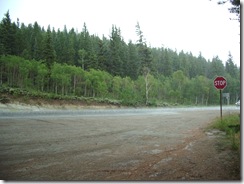 When we arrived we still felt strong and the wind was flowing up the canyon, so after an eternity of negotiations we decided to enjoy the wind and tackle the pass.

We rode about 3 miles up when a bit of a storm set in so we  took shelter under a big pine and waited out the storm.  30 minutes or less 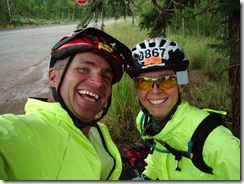 passed and we were on our way again.  Making good time up the 6 percent grade we were in sight of the summit but also in sight of a huge black cloud to the north and east.  Steve was confident the huge dark cloud would slip by to the north but it began lightning and we certainly didn’t want to  descend the other side into its grip, so we stopped just short of the top.  Harriet & 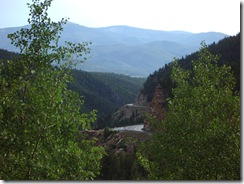 Cyndy made good progress up the hill at a cruising speed of 4.4 mph to keep the heart rate low, still surprised we stayed upright.

Our stopping point was at a switch back that provided a number of small areas of flat for us to pitch on.  It was forested with wonderful views off both sides of the ridge.  There was a fire pit, so we certainly weren’t the first to camp there.  Would have been nice of the previous campers to leave us some wood for a fire.

We found a nice spot for the tent, pitched then filled it with all the usual gear plus a bit more attempting to keep as much stuff out of the passing showers as possible.  We even rolled out the fly and staked it down to give us more cover.  Next was dinner. Cyndy whipped up some camp food, you know one of those freeze dried meals (beef stroganoff was pretty good with fresh baby carrots) that we have carried 1000 miles.

Then it was on to hanging the food.  You would think this was easy right?  Just throw the rope over a branch, tie the bags on and hoist up, right? Well, apparently we are carrying too much.  Steve started hoisting and it wouldn’t move, so Cyndy took over and Steve 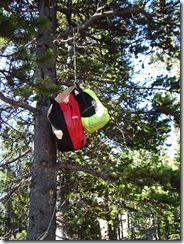 pushed the bags up from below.  That worked until he couldn’t reach the bags anymore.  They were still too low so Steve grabbed the rope and gave it a yank.  That’s when the rope broke and nearly took Steve out.  Perhaps we need to walk around with our bike helmets on or does Cyndy have too many snacks that shouldn’t be hanging from a limb?  We retied the bags and settled for the lower position.  Both of us laughed as we walked away knowing that they were well positioned for a bear hors d’oeuvre.

Sun was long gone by the time we finished, the long pants were out and it was time to call it a day.  Finally the sleeping bags feel good  as the temps are in the 40’s. Good night, sleep tight, don’t let the mosquitoes bite.