Set the alarm for 5:30 this morning but that didn’t stop us from delaying our departure until 7:30.  The morning was warm but as we move away from the desert, warm becomes relative.  Left town via a published bike route and got a new view of the city.  Very nice section with classic architecture that has been well maintained. 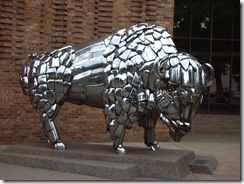 Being a Saturday, traffic was vastly reduced.  Happened by the Buffalo made of chrome bumpers and got a couple of nice photos.

Riding out of town to the south we were shown another part of town, more of the rural residential area, the road was a pleasant series of rollers.  We started off slow, taking our time getting back to the morning pedaling push, then we picked up a nice tail wind.  This has been the first morning in quite a while that we have enjoyed this advantage.  The speeds began to pick up and we went back to flying down the road in grand style.  The Grand Mesa area was to our left. Started to pick up a little rain, but it went away as quickly as it arrived.

Before we knew it we had logged 44 miles as we entered Delta. 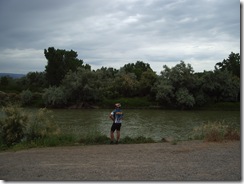 This one was a bit different in that there was the Gunnison river flowing through and plenty of trees.  We pulled into Confluence Park and enjoyed a moment at the boat ramp watching the water go by while some tubers/rafters measured the days fun against the temperature of the water. 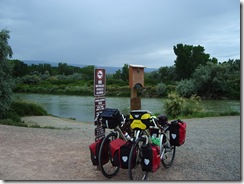 The town provided a good opportunity to grab some lunch.  Steve wanted pizza so we went on a mission.  The best we could do is Pizza Hut on the south side of town. We sat down and ordered lunch and a couple of drinks.  After the second refill for Steve the waitress just brought over a pitcher of soda and told us to have fun.

When we had walked in Steve’s eyes went immediately to a gent wearing a Cabo Yachts t-shirt after we were seated we ended up right beside the couple.  By the look on the man’s face he wasn’t ready for the barrage of questions that such a simple shirt could impart.  The initial shock wore off the gent and we went on to chat about other subjects.  They were pleasant folks from the region and didn’t mind promoting it either.

Steve started making some phone calls while Cyndy finished lunch and got a little carried away when he was chatting with his parents… so there went another hour.  But remember we’re suppose to be touring not racing.

Shortly after leaving the hut Steve had another flat, piece of glass in the new tire from yesterday. 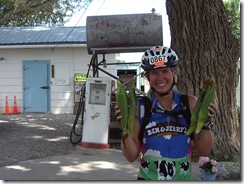 That’s two flats for that tire in less than 24 hours.  Wrapped up the repair in a few minutes and we were back on the road, until Cyndy spied the Buffalo & vegetable stand.  We had to go in.

Down the gravel road to “the first house on the right”.  They had a little two stall garage going with all sorts of home/farm grown veggies.  But the best part was the cherries, why you ask… because we had to go in to the walk in cooler to get them.  That’s right, we stood in a 40 degree refer and didn’t want to get out.  Steve suggested that we just pitch the tent right there on the floor.  Mmmm, so tempting.  But we had to get going once again so down gravel road we went.  Until… Steve heard an exclamation from Cyndy. 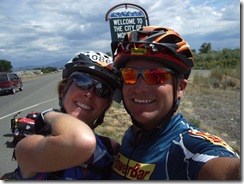 Steve looked back in time to see Cyndy’s front tire skidding (very low speed) and a look of horror as she went down on her right side.  As you can guess this wasn’t received well.  In the end there was little damage to both bike and rider, just elbow & ego bruising. (Man, Harriet my chariot has put on some pounds as I tried to peel her off of me!)  After a moment we were off again, not too worse for the wear.

Took the “business route” through Olathe.  Another very small town on the route.  Lots of farm land, this area is supposed to be known for it’s corn.  We’ve begun to appreciate the little quiet towns after Grand Junction.  At first the idea of being back in the larger town had appeal because of the services available, but you just can’t beat the lack of traffic and home town spirit in the towns.

On the other end of town we found a frontage road that gave a little relief from the traffic of Highway 50.  Since leaving GJ it has become abundantly clear that we have left the section of 50 that is considered the “loneliest road in America”.  Traffic load is up dramatically from west of Salina, UT were we joined I-70.  At least we have had a nice wide shoulder and the rumble strip didn’t have divots the size of a loaf of bread.

Arriving in Montrose around 4 pm, we detoured a little to get a feeling for this area.  Very quaint historical downtown.  A lot of original architecture and well kept buildings.  We headed east on Main St through the commercial section to get to the lodging section.  We looked at the campgrounds again and decided to motel it one more time.  Hey, it was still warm out!!

Pre dinner snack of fresh tomatoes and corn for Cyndy, leftover pizza for Steve, then dinner at the Red Barn.

So in 2 weeks, ~1000 miles, out of the barren desert, perhaps we can slow our pace and enjoy the towns, see what is here in Colorado.  Although we are close, we will miss the area’s “most challenging” climb to see the Black Canyon of Gunnison Wilderness (pictures looked great though!)  And opt for the river and reservoir ahead.