Today was a rest, errand and eat day.  Haven’t done much of the rest part.  But we have some time reserved when we’re done writing this to lounge.

Just after leaving Ely, NV Steve discovered that the click in his pedal that he thought was a loose cleat was actually a loose bottom bracket (the axle assembly that crank arms connect to).  At first there was a bit of panic not knowing how bad it would get and when another bike shop would be available.  It never got really bad, loosening and tightening at its whim, always remaining functional.  Very good for us because we hadn’t encountered another bike shop until today.

We dragged our tired butts down to the shop this morning. 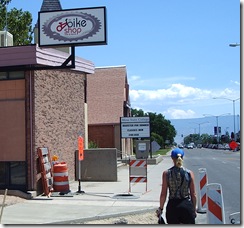 Cyndy had pointed us towards “The Bike Shop”. You guessed it, they are a Raleigh dealer.  We walked into the door and explained our situation and they were right on it.

The mechanic found the problem right away, a loose mounting cup,  but there was more.  The bearings in the bracket were also bad.  So we had them look at Cyndy’s too and that BB was bad as well.  I let the owner know that the bikes were only 2 months old and asked if the warranty would cover the repair? No problem.  I  also had them put a new tire on the rear, yup already rotated and now worn out.  At that point we figured it was best to run to REI a block over while they sorted out the situation.

When we returned everything was back in order.  Between inventory and cannibalizing another bike on their floor they got the problem solved.  Tires changed and rotated, drive train cleaned and oiled, bikes completely cleaned and adjusted.  They took care of everything under warranty except the tire.

We want to emphasize how well we were treated by the people in this organization.  We walked in off the streets, interrupted their day, they knew they would never see us again and they treated us like kings.  Keith and Nate were the mechanics and they did a great job, you could tell they knew their job. The owner, whose name escapes us, was so accommodating and helpful.  He provided us with a Colorado Cycling Map with the detailed information on road/bicycle lane widths, traffic volume, etc.   If any of you happen to be in the area and need bike stuff this is the place you want to go!! 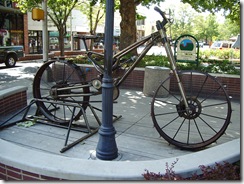 We pedaled off to Main Street on our newly cleaned and oiled rides enjoying the smooth operation of a properly completed tune up.  Stopped at the Rockslide Pub for some lunch and wandered around doing a little window shopping.  The area very reminiscent of K Street Mall, lots of fun stores, clothing, antiques, breweries, bistros, art & bike shops.  There were all sorts of artistic displays all along the street.  Even a bull made entirely of chrome bumpers (forgot to take a picture). 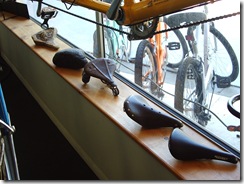 No we didn’t buy anything, but a tasty lunch, then found the Gelato store.  It was MUCH better than Dairy Queen, is Cyndy an ice cream snob?  One of the shirts she has been wearing is the Ben & Jerry’s jersey, “if it’s not fun, why do it?”

Cyndy is enjoying the fresh peaches purchased yesterday and is quite surprised they didn’t cook up inside the pannier arriving to our destination.  This part of Colorado has orchards & vineyards.  Was suggested that we visit the wineries “Just 10 miles away”…and “Just a mere 38 mile loop” we would have seen the “crown jewel of road riding in the Grand Valley” around the Colorado National Monument.  Well, perhaps another time.  After reading through one of the local cycling magazines, it sounds like there are tons of rides during the summer, as well as trail runs too!

After dinner here in our room (ice bins work great as salad bowls) Steve realized he has ANOTHER flat rear tire, on the brand new tire.  This may be known as the city of holes.  Is the air so thin it escapes through the tubes for us Californians (‘us’ is a euphemism Steve claims no such membership)? In the time it took for Cyndy to add a few sentences, Steve has already changed that flat.

We realized that we might have been a bit tired as we probably didn’t quite drink enough fluids during the day. 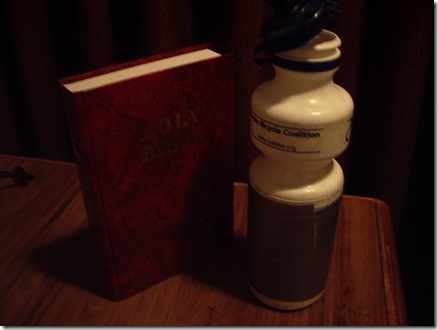 We had thought it to be a low mileage day but the entire day took an eternity & it was hot, hot, hot.  Of course our traditional Champagne Friday had been moved to Thursday…but we didn’t even finish the one whole bottle!

Speaking of bottles, we are about to have a funeral for Steve’s Chico Wildflower water bottle, circa 2003.  He had to duct tape it together at the rest stop “papa’s place” before entering a long desert stretch from green river.  A moment of silence please.