Decided to sleep in this morning after our long, hot ride yesterday. It still seemed surreal what we did. So we got up late and messed around Green River doing some errands.  Stopped at the John Wesley Powell Museum, where we at least watched a great movie about exploring the Green River & Colorado rivers.  Here we ran into another cyclist from Minneapolis & chatted for over an hour.  He certainly had the weather beaten look & rag tag bike with the 5 gallon buckets for panniers.  Finally broke away as starvation was setting in then went down to the post office and mailed 5.2 pounds of stuff back home.  Picked up provisions at one of the two grocery stores (this too was going out of business).  As it worked out we didn’t leave the hotel until 5pm, hanging out in the AC & filling up water bottles with ice.

Leaving late was to rest and take advantage of the late afternoon cooling (it never happened).  We expected only to go 40 or so miles and camp in a little town of Cisco, UT.  Although it never cooled the wind was with us. 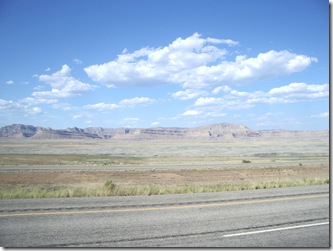 After a 25 mile easy climb we stopped at “the only” water stop for 70 miles.  An exit (yup, we’re still riding on the interstate) with one building.  It was Papa’s Stop or something like that, and when we pulled in the open sign was not lit, the door was locked,  but there were people inside.  A mild panic washed over us.  With 70 miles of desert to cover, we needed water and we left Green River low not wanting to haul water when we could get it at the top of the hill.

The clerk came out to let us know they were closed because the register was down.  We assured him we only needed water and if we did decide to purchase anything we would pay cash.  He was very accommodating.  As with any stop for the last two days we stayed too long and enjoyed the shade as one driver after another pulled in only to be turned away.

We returned to the highway and enjoyed more than 20 miles of moderate downhill into Cisco, generally running 22 to 28 mph.  We were thankful for the quick pace enabling us to get to our destination just before the sun sunk behind the mountains.  This exit was desolate, not a building to be seen anywhere and as we progressed down the road the buildings we did see were certainly uninhabitable.

Two or three miles in from the exit we found ourselves a camp spot in the wild land.  Steve went bush whacking to locate a flat spot as Cyndy “gave him the look”.  He located a reasonable location that happened to be near another dirt road so Cyndy had easy access and we went about setting up. With camp set we enjoyed (not really) hot pockets (now defrosted) that we gotten earlier and went to bed.  All was peaceful until the freight train came zooming by making quite a racket, then another, then the coyotes howling.  Still got a good nights’ sleep.

Given the surroundings, Steve had a tough time deciding between putting the shopping cart (homeless) icon versus the wild land camping on the location map.

Note:  The bikes are dangerous.  Left unattended or unwatched, they will fall over & knock you out.  We have the strangest bruises from those darn bikes!