The distance from Salina, UT to Grand Junction CO is 205 miles and there is only one town between the two for water, Green River.  This town also happens to be close enough to the middle to be called that.   Steve wanted to break up the ride in thirds, using Green River as a provisioning and lunch stop the second day, camping along the road on both sides of Green River.  Cyndy wanted to make the 100+ mile run to the town. 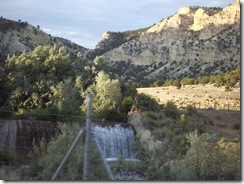 We left Salina at the relatively late hour of 7 am  and started our day by joining traffic on I-70, then beginning a 28 mile climb through the Fishlake National Forest.  It was a manageable pitch with a stream running parallel that, along with the 68 degree temps, made our morning very pleasant.  Nothing like sharing a Subway sandwich  on the side of the Interstate with a babbling stream on one side.  Oops, several miles later we ate the other half of sandwich a bit earlier than expected as 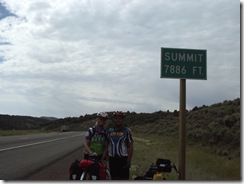 we repaired Cyndy’s a flat tire.

We crested the mountain then started the descent until we arrived at a rest stop about 3 miles down.  This was an unexpected water stop and would be the last for the day.  The caretaker took an interest in our journey and we proceeded to spend an hour or more chatting.  On departure the temps and landscape changed dramatically.

The landscape turned to a desolate sandy rocky scene and the temps climbed 13 degrees.  Fortunately, the cloud front that had been following us for days moved in and filtered the sunlight, keeping the temps in check.  We even had our own private cloud, that continued to shade us when the larger mass oscillated leaving the sun free to bake the surrounding area. 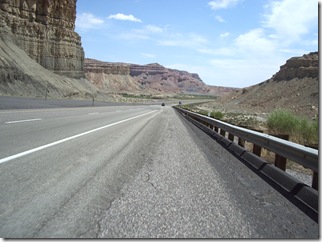 Steve was in no rush thinking we were going 70 +/- miles, Cyndy had a mission.  50 or so miles out we encountered another long climb and by this time the temps, food and long day were beginning to take their toll.  Steve had few things on his mind that didn’t include water, swimming or drinking a cold beverage or at least napping on the side of the road.  We were definitely exchanging less than happy comments about the hill.

Shortly after our bout of whining, we saw a car stop ahead of us and two folks get out.  Steve guessed it was a nature stop.  When we got closer we saw the gentleman, Don,  taking a photo.  When we arrived at their care (ok I meant car, but….), Ramona, was offering us ice, cold sodas and fruit. 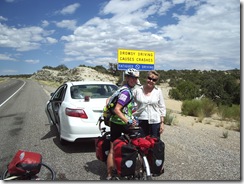 Turns out they were cyclists from Irvine, CA and could tell our mettle was being tested.

We spent quite a bit of time with them and they couldn’t have been nicer.  They were truly two angels dropped from the sky to answer our prayers.  When we left them we had the energy of an early morning rider and we sped off to continue our trip, literally increasing our speed up the never-ending hill.

At this point we were 54 miles out and Steve was still fantasizing that we would be stopping in 10 or fifteen miles.  As we rode into the afternoon with the aid of our private guardian cloud, the temps had moderated to 85 and we were feeling good.  Steve was waking from his dream that we would be stopping at 70 miles and was becoming aware of the fact that today would be a 107 mile ride. 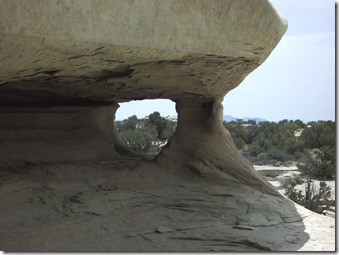 As we pressed on to 80 then 90 miles, the temps stayed nice and we were about to be granted a 6% downhill “all the way to town”.  Well as you might guess there’s no such thing as a 20 mile down hill and the temp went from 85 to 107 during the six mile descent.  Then came the uphill.  The mileage signs seemed to show we were never going to get to this town no matter how hard we try.  Steve suggested we’re not going to Green River, we’re trying to get to Brigadoon (look it up).

Well we did finally get there after 12 hours of riding.  Stopped at Rays Tavern for a bit to eat, ended up chatting with everyone in the restaurant and eating with Paul, a music professor from Denver.

Not much here.  Just another example of a struggling little mining town on US50.  At least there is a river in Green River.  We hope to at least put our feet in the water tomorrow.

There was a little greenery today and a whole lot of moonscape. 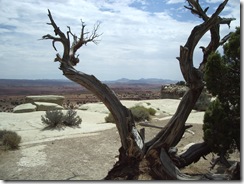 Desolate, parched badlands, cliffs, canyons, towers, spires and buttes for miles and miles.  Turns out one of the areas, San Rafael Reef/ Swell is twice the size of Rhode Island without a single inhabitant.  Both of our descents (2 out of 3 for the day) were the most spectacular, however we didn’t want to brake for a better look or picture.  There did appear to be a castle in the sky (Castle Valley was magical) and then that LONG descent through red rock Spotted Wolf Canyon.

We are certainly being tattooed with the most peculiar tan lines  and slight chafing in unmentionable areas (why the middle of my left palm?)  Legs are a bit tired, knees a little creaky but for the most part still hanging in there!