After a long day yesterday and our expectations of hot weather today, we set our alarm for 4:30am.  Hopped up in the morning and started getting ready then we noticed that 2 things were out of place: the sky was brightening and the guys on the motorcycles we spoke to yesterday were up and on their way out.  Houston, we have a problem!  Turns out my phone did not update to the correct time when we crossed the time zone to mountain (yes, we were well 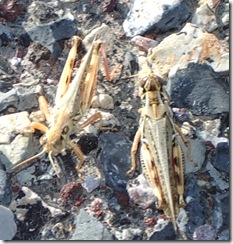 within the new zone with no chance of having a tower in the old zone).  Sorta set the tone for the day.

Steve was pulling at the start of the day and Cyndy got a little impatient with the slow pace; “you want me to pull for awhile?”(well, he had dropped to single digits on the flats!).   Steve wasn’t feeling the love today, but at least we were entertained by the thousands of grass hoppers jumping as we passed. You have to look close at the front sides of the bike.

From the back it looked like like the lead rider was throwing up a grasshopper wake as the little critters were scared off. 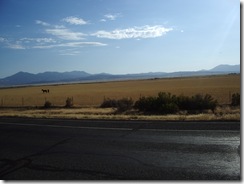 The other fun thing was the fact that all the cows seemed to all stop in their tracks  and every single one of them stared at us as we went by.  All day!  Leaving Delta looked a lot like the Sacramento valley.

We had two intermediate refueling stops today, which was  a nice change from our long legs with no stops.  We got to the first stop 29 miles out and either we missed the town or Holden didn’t exist… but we found shade & pulled out bagels & fruit.  By this point Steve was ready to sit on his butt for awhile, relax and eat.  Cyndy wasn’t objecting to the idea.

The second leg of our day took us on I-15 north, a main artery south of Provo, UT.  Neither of us relished the idea of being on the highway, even if it was only for 15 miles. 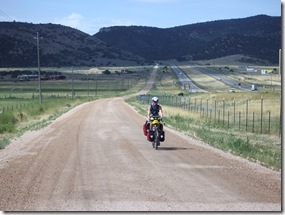 As we rode the highway overpass we spied a frontage road and to be prudent we asked Alice (Garmin Nuvi) if that way would work… No problem said the fickle lying machine.  Well, of the 15 miles to Scipio, only the first 2-3 and another half mile section in the middle were paved.  The rest you ask?  Gravel!  Oh, and maybe a bit steeper than the highway too.  So Cyndy re-learned how to “mountain bike”.

We finally got off that wonderful road and had to undo the one benefit it provided… a shortcut.  Happened that the only restaurant was on the other side of the highway so we re-traced the road to Dairy Queen.

While we sat there another patron was eating a mango outside the window and had Cyndy drooling.  After an hour or so at the DQ, we had stuffed ourselves with enough “good stuff”, filled our bottles with ice and water and set out to cover the last 27 miles to Salina. 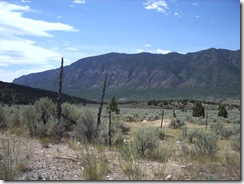 lumbered across the flats and up the hills like a pair of old pack mules trying to ignore their situation.  Cyndy was excited about an upcoming lake shown on the map but it turned out to be only a cows knee deep and the cows had gotten there first.  Finally we reached a summit and the last 10 miles into Salina were down hill.  We slid into town not really any worse for the wear.

Our arrival did clear up one question; where were all the huge grain trucks going and why were they only going in our direction?  Turns out they weren’t grain trucks they were salt trucks from the mine in Salina returning from the days’ deliveries.  Glad to think we had seen the last of them.  Or have we?

Got to the super 8 motel, cleaned up and headed to the pool. 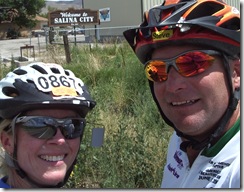 Then Steve had to attend to our first flat of the trip.  This morning his front tire was low but the bags were hung so we just pumped it up and got going.  One more inflation about 15 miles from our destination helped us make it through.  A quick check of brake pad status showed the panic braking on steep down hills hasn’t worn them too badly, yet.

The next 200 miles has only one provisioning stop so we’re off to get dinner and supplies to make the jump.  We’ll probably be pitching the tent in a “non designated camp area” the next couple of nights.  Enjoying the clean cool hotel right now I assure you.  Good night & sleep tight.