Early start (still late in Curt’s book), alarm at 4:00 out before 4:45 am.  Guess the delayed start may have been part breakfast and part Cyndy’s trepidation about travelling in the dark.  Come to find out it was really a good thing… lighting worked well and by the time the sun had risen and we 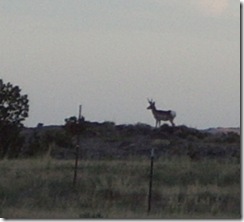 were over our first pass.  Very near the peak we finally saw elk.  Cyndy saw a few cross the road ahead of her, then realized about 12 more were around, watching.  Got a silhouette photo of one.   Not ONE car was to be seen for the first 20 miles.

Down a nice 8% grade for many miles, enjoyed the shade.  Popped out into a land of nothingness.  Here it was just flat and dry, with mountain peaks all around.  To emphasize the terrain, the next pass was called Skull Rock Pass.  Back into dry, hot lands.  Teased us with a large body of water, Seiver Lake, on our right for MILES without access.  Turned out to be dry this time of year anyway.

This valley one of the largest we have been in so far. 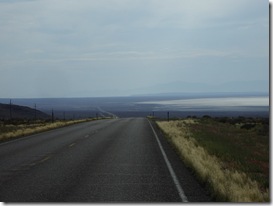 We could see around the other side of the lake where our destination lie, but we knew that it was still more than 50 miles out.  Even as we progressed we could see the power plant that marked the town but hours passed before we could reach it.  Glad the wind was not blowing too hard, this would be the place for a true sand storm.  Utah roads have a bit more texture to them than the smooth Nevada roads.

A car passed in the other direction waving out the window, then Peter, Laine, & Alex made a U-turn to flag us down and chat.  They were going back to the bay area after competing in a mountain bike race in Colorado.  When they saw us, they decided to check on us. They came out with a large grocery bag of Gu’s and offered 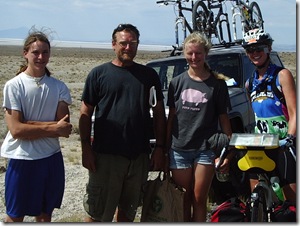 them all.  Of course we’re watching our weight so we declined.  Then proceeded to chat with them for another 45 minutes or so about our trip and theirs.  Before they left they offered some Gatorade, it wasn’t cold but beggars can’t be choosers so we accepted and were off again.

Hot.  This landscape was so different than anything we’ve experienced.  It looked like a reservoir bottom after the water has been let down.  There is dry sand with dead trees and scrub sprouting from it, it’s hot and dry, the road is a black ribbon laid on top with heat radiating and distorting the view ahead.  Very few cars pass us and the passengers stare at us all the way by.  I’m sure you can guess what they were thinking.  This is all so very far from the ocean.

After many miles, we rode into an area that had green fields of alfalfa, corn and wheat.  But the one thing on our minds was ICE.  Our first sign of civilization was the Sinclair gas station in the town of Hinckley.  We staggered in and bellied up to the soda machine where we promptly put away buckets of ice cold soda, and stood under the AC. 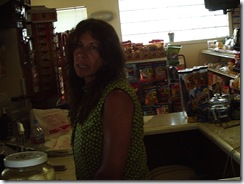 We had sweat pouring from the back of our arms that collected on the floor around the dispensary.  We’re not sure how much of the water on the floor was sweat or ice we had dropped, but the floor was covered in puddles anyway.  After several minutes of rehabilitation, we made our way over to the salty snacks, then we proceeded to stand for the next hour munching and watching the entire town come in and out exchanging a continuous string of banter with the store clerk Becky.  There were all kinds of stories!  We considered handing off our extra clothes to Wayne Leaders, the postal inspector we met there. He was traveling 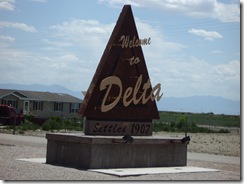 to Colorado and gave us his card, graciously offering help in case we needed anything during our venture through Colorado.

Eventually we made our way out the door, this time with our evening accommodations arranged, as Becky had called her daughter at the local Senior Care Center (which also was a motel with AC! as  Steve did not want to camp in this heat) and made sure we were taken care of.

We arrived at the hotel and did the usual unpack thing, but this time we had a beautiful suite with plenty of room and it was fairly early so we could enjoy the air-conditioning and other amenities.

We headed across the street to a local diner and order the best tasting chicken dinner & mashed potatoes (blue haired time as we had dinner at 4!) dinner.  Even came with vegetables!  This was the first night out of 8 that Steve didn’t have beef (that was because we missed dinners the first 2 nights of our trip, remember?)

Walked down to the grocery store for provisions and milk!  Second of two long chats with guys from Portland enjoying a motorcycle road trip on the way back to the hotel.  We were hiding in the shade but Steve’s milk was getting warm and he was getting anxious.