The weather is warming up for the next 3 legs, so up at 5 and out the door at 5:45.  Had nice cool start while we followed the rolling valley bottom south for 20 or so miles.  Stopped for a snack break 12 miles out at an elk viewing spot.  Like so many other wildlife viewing opportunities, they were out to lunch when we arrived. 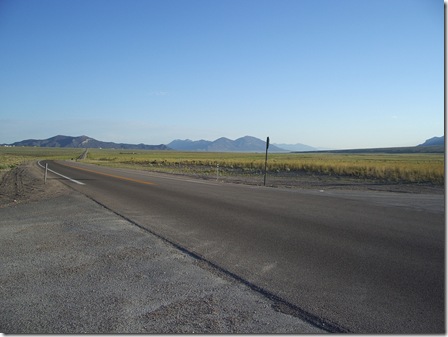 A bit further down the road was our first climb of the day which went pretty quick given the low morning temps.  We did see hoof marks in the sand at the side of the road which was out first evidence of life out here.  Steve saw a workers sign just ahead of the marks and thinks the prints where put there by workers just to keep the hope alive.  Stopped at the summit for a little more breakfast and watched the morning rush go by.  On the descent Cyndy wanted to stop at Majors Junction where a garden full of flowers beckoned but she didn’t want to give up the comfy draft that was sucking her down the hill.

As we descended the landscape changed dramatically.  It went from scrubby vegetation and somewhat pleasant coloring to stark gray and white sand and rock.  Not one piece of vegetation as far as you could see.

On the second climb we started to feel the effects of this warm day.  The climb wasn’t really steep but is was long and with little wind the on pavement temp of 108 was getting uncomfortable.  Steve got a little cranky near the top as salty sweat dripping in his eyes partially blinded him.

Down the other side of Sacramento pass and a long stop at a rest stop allowed us to cool off and enjoy the scenery and some more snacks.   While we were there afternoon thunderstorms started brewing on the west side of the range moving slowly in our direction.  This resulted in the stay or go negotiation.  We decided to make a run for it.

Our destination this evening was the little town of Baker, NV.  The one issue was that Baker is 5 miles off route.  Just before the turn off to Baker there was a sign for the Border Inn ahead on Hwy 50.  So the negotiations began.  We started for Baker then stopped and stopped again standing in the middle of the road trying figure out which mapping device was telling the truth about distances and shortcuts and working in the best advantage for tomorrows 101 mile leg. 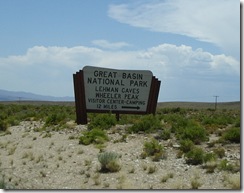 Cyndy wanted to go to Baker so off we went.  We stopped at the welcome center at Great Basin National Park, then headed to the Electrolux Cafe.  Cyndy’s friend had recommended it and it really turned out to be an eclectic oasis in the middle of nowhere. 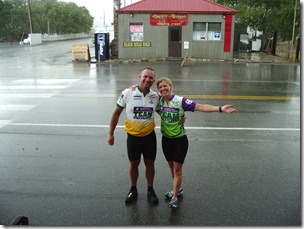 of the pass meandered our way and let loose with a rain storm worthy of the midwest.  Steve ran out and dragged the bikes under cover and we sat back and watched glad to not have been caught out in it.

In the end the need to shorten the ride tomorrow won out and we hopped back on our bikes and headed for the Border Inn.  As we pulled in we met a family taking a photo of themselves at the border sign and chatted with them at length before talking them into taking our photo. 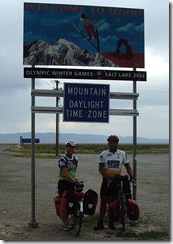 All that was left was to get a room, take a shower and get ready for a early departure tomorrow.

We’re at dinner writing this as usual and even though the hotel is adjacent to the diner it takes a full hour to walk over there so we need to get going.