Wow, what an unremarkable day.  We rolled out of bed around 6am and ran down to eat at the continental breakfast provided by the motel.  Stuffed in as much as we could then stuffed a little bit more into our bags (Shhhh, don’t tell anyone").  Ran back to the room, made sandwiches, packed up and we were off by 7:15.  Yup, that’s the earliest we’ve gotten out so far. 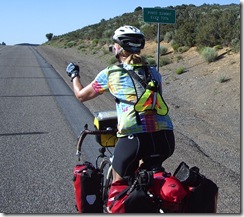 GOOD MORNING!  Blue skies, birds chirping, quiet streets. Another climbing start, 6 miles up a 6% or more hill grade and we were off.  This would be one of 4 summits we had to cross today and we hoped for easy coasts after the climbs.  Unfortunately the wind conspired against us one more day and hampered our down hills causing us to actually pedal to maintain a reasonable pace. Ug!  During the first climb towards Pinto Summit, a few miles in we heard a toot-toot from the lady we met at the motel “I’ll say hi from my white Prius as I cruise by you guys, why would you want to cycle all the way to Ely?”  Pretty wildflowers, butterflies graced Steve’s back and we saw a fox and several rabbits.

At the top of the second hill, Pancake Summit,  we stopped in the 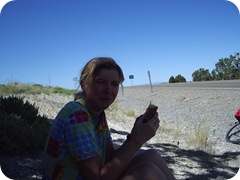 shade and enjoyed the morning buffet we had assembled, perhaps staying to enjoy the scenery a little too long. But hey, that’s what we’re out here for.  There were actually trees!  We finally got back on the road and only a few short minutes later we ran across John.

John was cycling around 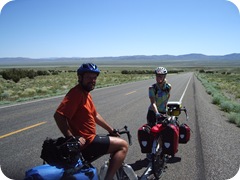 here and there trying to see as much as possible and was much less interested in getting anywhere in particular.   He had ridden for a few days with some others he had met then broke off on his own again, traveling all over CO, down to the Grand Canyon, Bryce Canyon, back to NV.  This was his first trip to the U.S. from his home country of Switzerland,  He was very chatty and didn’t really want to move on in any rush.  We talked at length about the terrain we each had ahead and weather as we with others.  He had interesting water bottle holders on the front forks and had pared down his cycling gloves to the bare mininum.  The chatter was enjoyable but we had a long ride ahead and you know the story.

Like other solo cyclists we have encountered, he was riding a much lighter bike and carrying much less weight and camping in moderation.  Now having been on the bikes for a week we are getting a feel for what we really need.  We will use our down time tomorrow to re-evaluate and probably mail some items home.  The problem with purging is remaining prepared the the changing weather we will most certainly encounter as we move east while paring the extraneous items.

Another issue is that bike, racks and bags probably make up 40% or more of our total weight, so to send home 4oz of socks doesn’t make sense.  Space is not an issue, but if we can get pounds off, that will make a real difference in our range and climb performance.  Whoever said you need “plenty of socks” missed the point.  We have taken some friends’ advice to shower & wash your ride clothes at the same time so they are always ready for the next day.

On the road again, up and down, one hill looks like the next.  To quote: Basin. Fault. Range. Repeat.” We have been trying to take a lot of photos but the terrain (and composition) is so homogenous that one picture is difficult to distinguish from another.  If not for the elevation sign in the background there would be no difference, so not so many today.

Going up Little Antelope Summit there was actually a road sign depicting an antelope, then a few miles later another one stated “major deer crossing”.  Well, we didn’t see a one and we had plenty of opportunity traveling at a whopping 4.5 miles per hour, but we did salute just in case. 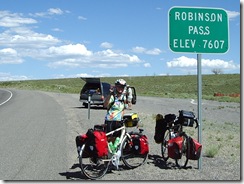 The last one, Robinson Summit was supposed to bring a fast long descent into town.  Unfortunately this was the time we both became crabby at the wind & neither wanted to get in front to pull .  The HOT dregs of Gatorade remains were unappetizing.

We pulled into Ely and headed straight for the “old time 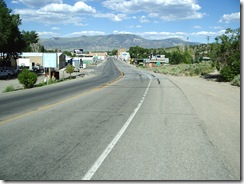 soda fountain” at the Economy Drugstore and ordered up 1500 calories of milk shakes.  Mmmm cool and creamy.  Store complete with black & white checkered floor & barstools at the countertop. Made a few phone calls to get a room for the night then rode off to check in.  The afternoon was warm and we were tired and a bit hot as well as grimy from sun block/sweat/salt. First things first, we jumped into the pool.  What a nice treat to float and relax the feet, arms & legs.  Chatted with Mom and Dad while sitting on the stairs in the pool, all that was missing was a frothy frozen drink.

Steve was in a take-it-or-leave-it dinner mood but Cyndy was needing food.  The casino down the street looked as good as any place.

One week on the road – what have we learned so far and will it be contradicted further along?  What do you think?