We knew today was going to be long so for the first time on this trip we set an alarm.  A brief negotiation, surrounding the breakfast place hours, resulted in a 6:15 wake up setting.

As you would guess the alarm went off much too early and we did our best to ignore it.   Before too long we gained enough sense to understand it was in our best interest to give in to it’s persistent nagging.  We stuffed our sleeping bags and pads into t  heir little nylon homes and then stuffed them into our panniers along with all the other items that exploded all over the campsite.  But this morning we wouldn’t be so quick to hang them on the bikes. Today we had the pleasure to take a brief ride to the restaurant without the usual extra weight of panniers.

We hopped on our unusually spry bikes and reluctantly coasted down the hill to eat.  We rolled in to this small town spot while John, a long time local, was briefing some other tourists on places to go and things to see.  Our agenda was fixed so I tried to avoid engaging him, but he would have no part of that.  Turns out he was very nice and knowledgeable and gave us a key piece of info.  Turns out that a park two climbs away, Bob Scott Summit, did in fact have water, contrary to the tourist documents, which saved us from carrying an additional 8 lbs over two passes.  Thanks John.

I finished up my biscuits and gravy with 2 eggs and hash browns relatively quickly and ran out on the bill leaving Cyndy in peace with her pancakes and bacon… Yes that’s right bacon!!

Really I was just trying to get back to the campsite to pack the tent and be ready to go as soon as Cyndy was back.  Within a few minutes she returned and after some meandering we looked ready to go.  Somehow the time had again gotten away from us and our early start turned into 8:15.  What I forget to mention was that right out of our camp was a 1000Ft 8+% grade that stretched on for 2.5 miles.  Cyndy had been worried about the elevation profile but just kept envisioning Indian Hill multiple times over. 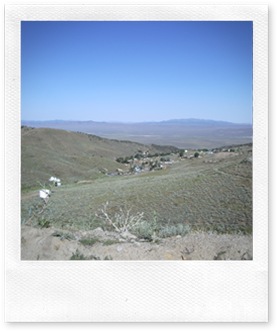 Maybe we were procrastinating?

As it turns out, we felt great after a hearty meal and a good nights’ rest so the first hill posed no real challenge.  At the summit Cyndy said “ that’s it?”   We reached the top within 30 mins and were on our way down a long gradual slope that took us through some beautiful forested valleys.  Steve is still wondering why the town is on the “other" side of the ridge.

Down we went, then up the next climb without hesitation.  We were surprised with the flora, the only tumbleweed we had encountered was outside of Carson City.  Today there was greenery around and even wildflowers.  As we summitted there was the campground on the left, complete with the promised water and bathrooms (with flush toilets & sinks!) 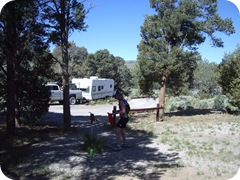 As we filled our various bottles from the wonderfully cool well water a gent pulled up in his blue Westphalia and started asking questions about our trip.  He was from Sacramento and didn’t hesitate to let us know he had made the trip in one day.  After which we chatted about all things touristy in the area, including the hot springs and Eureka. Another gent from across the road joined in the fray and between the two of them (conflicting opinions) we had all the information we needed to know about today’s destination.

The second gent to arrive seemed to really want to chat… with anyone, but we needed to get going so we said goodbye and headed down the hill.  This was a long and low pitched descent that seemed to last 20 joyous minutes.  Then it unceremoniously deposited us in a valley where we would spend most of the day pedaling the 52 miles to our next climb into Eureka.  This part of the ride was made especially enjoyable due to a persistent east wind that was forecast to be west.

About 1/3 of the way across the valley we ran into a construction zone with escorted traffic.  We pulled to the front of the line to see how they wanted to handle us.  When we arrived there was a collection of folks out of their cars chatting and enjoying the day.  One of the ladies had just gotten out of her RV with a bunch of cold cherries and we quickly accepted an offer to share in this unexpected bounty.  A few questions from the drivers and we were off again. 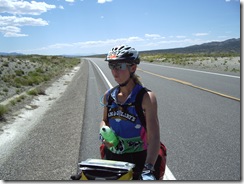 Today’s ride was very long with no services between towns.  It was all down hill except the uphill’s and we were getting hungry around the half way mark. We stopped at a picnic table conveniently located with shade.  Anything that was dry was a hard sell, but the tuna in a pouch and a little mayo was a nice change.  Steve also decided that long ride legs needed another flavor/texture beverage to help the gallon + of water to continue to go down.  We gagged down the triscuts and a bit more enjoyable dried fruit.  Felt a bit unsatisfied but onward we went.

This was the first day we didn’t have lunch available to us and the lack of sufficient quantity/quality calories started to have an effect about 55 miles into the day.  While we didn’t really bonk, we had just worn through everything our bodies could muster to keep us fueled.  Tomorrows long jump to Ely will be fueled better by making a couple of hearty sandwiches 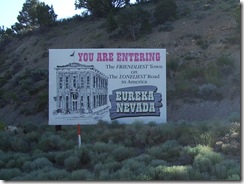 for the midday feast.

We finally crawled into Eureka, hell bent on getting a soda or two or three to give a us quick boost, but somehow we got distracted and ended up in a hotel getting a room first.  Steve spotted a juice machine in the lobby and sucked down 3 or 4 cups in quick succession.  The sugar infusion was duly enjoyed.

A quick shower and change and we were off for dinner at the Owl Club Diner, one of only three restaurants in town still operating.  Steve brought the computer to dinner as we have the last few nights to help get the documentation done.  Cyndy chatted with the waitress and found out she was from Grass Valley and had been here 4 short (or long) months.  Although poor job prospects had driven her to make this move, seemed she would rather be in Grass Valley.

We walked around town after dinner to take some photos and found that a great number of the buildings were only facades, victims of closing mines and other economic conditions that left them in ruins behind the brick street fronts. 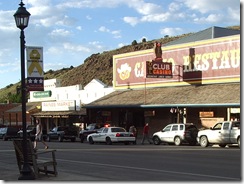 ( the bar part) the sheriff pulled out of his parking space on the south side, makes a u-turn, turns on his lights and stops at the front door of the bar.  This was something right out of “nobody walks in LA”.  We stood by to watch for Jessie James to come barreling through the swinging doors but no, it wasn’t quite that exciting.  Turns out one of the local ladies had a little too much to drink and the sheriff was providing a bit of small town community service.  This was the Highlight of Steve’s day.  Imagine he says; “calling any cop for assistance in the towns we live in.  If they didn’t harass you or arrest you, they would certainly ignore you.”

These little towns make Winters seem like the big city.  We drive 8 miles to the grocery store they go 80.  Not much to attract people to these dying mining towns, but they sure seem to have their priorities straight.

Cyndy’s byline for today:  This is the day Steve broke wind, er…broke the wind for Harriet & Cyndy who tailed behind him, appreciating the draft.  Harriet has found a new friend,(MSR), the Dramalyte hunk who unfortunately weighs 8 pounds & perched on the back rack.  But fortunately he was sharing & watered us through the long stretch (over 68 miles without any services) between towns.

We found the local grocery store & I am enjoying fresh raspberries for dessert!