Last night at Cold Springs around dinner time the wind laid down and I off handedly questioned “what happed to the wind”  because the breeze was pleasantly cool.  Well, I got my wish about 10 minutes later when a north east breeze freshened to about 15-20.  I didn’t think much more about it believing that it would lay down over night or most definitely by morning.

Well it didn’t, and as we procrastinated this morning hoping 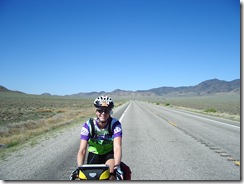 the rising sun would do it’s work and stop the wind, time slipped by and the next thing we knew it was 9am and we could no longer delay.  So we begrudgingly packed our stuff and headed out into the head wind.

Cold Springs was barely out of sight when another west bound rider came into view.  This time the rider wanted to talk so we stopped and met Tom (he was gracious enough to not make us pronounce his real name), a cop from Austria.  Turns out he had left NY City just 4 short weeks earlier and had made it to the front range in just 2 weeks.  Yes, this guy was a riding stud and had the look you would expect of a European athlete.

He was cheerful and we exchanged stories and emails and he took some photos of us all.  We found out he was heading for San Francisco and that his family was meeting him there.  Then they were renting an RV and going out on an American holiday (he was very proud of that).   We wanted to chat some more but the wind was behind him, to his pleasure and he had an agenda so we parted ways and we were once again heading for Austin. 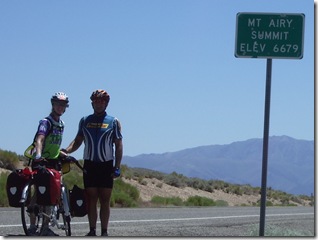 The valley we dropped into was long and flat as we pedaled towards the next climb.  We knew there were 3 ranges to summit today.  Each presented itself as we summitted the previous, only what looked like a quick 5 or so mile jaunt was more like 18.  Descend, cross the flats, climb repeat…

As usual the drivers (for most part) were very courteous.  We even had some folks stop and ask us if we needed some water and to make sure we were alright. 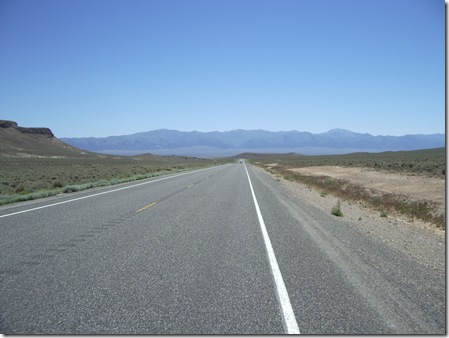 The last valley before the short climb into Austin somehow resulted in a half dozen stops, including a “river” that was suppose to be an opportunity to stick our feet in.  It wasn’t.

We huffed and puffed our way into Austin and Cyndy had one and only one item on her mind; A milk shake at Toiyabe Cafe.  It was one of the stores recommended  in her tour book.  We found it quick enough and before we knew it we had a shake in our hands.  Take into account the circumstances but when we say good we mean GOOD STUFF!  That done we sat down for a hardy long lunch knowing our camp spot was only a few hundred feet up the hill and it was the earliest stop we have had yet. 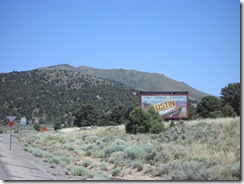 A number of people wanted to know where we were going and coming from, so lunch carried on.  Then a young guy came in the door.  A fellow rider who it turns out, had left Key West in May and ended up with us in Austin via Wyoming.  He had some great stories of his trip and over the hour or so of visiting we gave him some insight into the road ahead including how to get through Sacramento to SF without much fuss.  Local information is so helpful.

We shared our story with some more folks in the parking lot and then committed ourselves to the one tenth mile ride up to the campground/church.   The facility has a few RV spots and a nice lawn in a common area adjacent to the building where Donna, the proprietor, allowed us to set up camp for the night.

Donna was, as so many others have been, VERY generous.  In the course of small talk and gaining town insight we had learned that the only place to get milk and sundries is closed today because no one was planning to come in.  So she offered to bring me some milk from home, which she promptly did, then provided access to the church kitchen including some yummy hamburgers that we cooked up on the grill.  Cyndy threw in some instant mashed potatoes and we were living in a grand fashion.

Crap, I just remembered my second burger is still on the grill.  Darn it’s a little petrified hockey puck.  The flies aren’t even interested.  Be gracious mmmm…

Pieces & parts are hanging in there, some strange sunburn lines like, who remembers the spot between watch and glove or back of the ear for newly bald guys.