The alarm went off “early” this morning at 6:45 so we could get a good start on the day.  The hotel had continental breakfast and we planned to over indulge.  The muffins and fresh cooked waffles were good but as has happened every other morning, it was tough getting our share of calories down.  After about 3o mins or so I just gave up and headed back to the room with my waffle remnants to start packing and to check email one last time and to play mafia 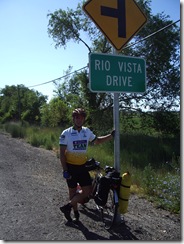 wars… Ok I checked facebook one more time and the weather and tried to Skype my parents… OH what was I doing?  Packing that’s right.

Cyndy came back to the room some minutes later and we actually got down to stuffing all our junk back into the bags and cleaning out the room.  Finally got the bikes out and the bags hung and we were off, only it was after 9 am once again.  So much for the early start.

We made our way out of the parking lot and back onto 50 and were greeted by another wonderful morning.  Heading out of town, we stopped for one last picture of Fallon as we passed the edge of town and entered the irrigated grasslands of the rural eastern section.  The grassland gave way to desert (bottom of what used to be Lake Lahontan) and about 10 miles out of town we we ran into Grimes Point recreation area.  The area contains a large number of petroglyphs (Steve thinks this was just ancient kids graffiti) so we took a few minutes to walk around the closest paths.  Didn’t pass up an opportunity to have a little more to eat (those baby carrots sure tasted good along with nacho cheese dip & wheat thins, oh my) or to use the facilities. 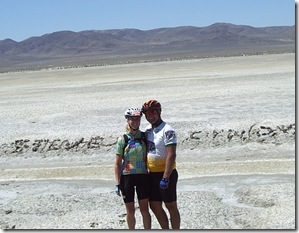 We had enough of the graffiti (but Cyndy was glad to at least get a 1/2 mile walk in) and were once again moving through the lake bottom/salt flats.  On the far end of the valley Steve decided he wanted to sign his name in rocks on the side of the road like dozens of others had.  Work was completed, evidentiary photos were taken, a melting power bar was eaten and we were on the go.

The following 20 +/- miles were a series of hills and valleys one not very different from the next until 3 westbound riders appeared ahead of us.  We never stopped to talk but quickly found out the three ladies were heading for SFO and from the lack of any supplies on their bikes understood they had the luxury of full support. 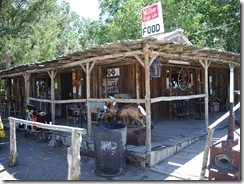 Soon after we arrived at Middlegate.  It is an oasis (loosely speaking) for all.  If you have watched Bonanza and have seen the little settlement in the middle of nowhere; kinda cool, kinda falling down, kinda seedy you know what this place was like.  The folks were great and served us up a tasty, if not healthy, lunch, let us fill all of our water containers and offered a spot out back for us to camp.  But we were feeling good and wanted to get a couple more miles in, so that our climb into Austin the tomorrow would be an easy 48 rather than a “have to do” 63, so we pushed on to Cold Springs Station. 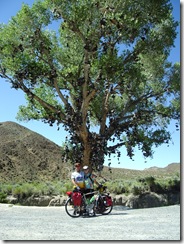 windmill pump, the “shoe tree”, an enormous sand dune, and remnants of stations from the Pony Express.

We arrived at Cold Springs around 5pm to find a interesting spot where there was a DOT station, a campground and a couple of rooms for rent on a high plain, in literally, the middle of nowhere.  It took us a while to find the care taker, who turned out to be a very pleasant gent.  He set us up with a grassy spot, head, shower, shade, picnic table, and a beer for 5 bucks.  To top it off turns out he’s from Lincoln, Ca. and has a new truck he just got from Hanlees in Davis, ca.

Steve took pleasure in walking around in the cool, freshly watered grass while Cyndy showered and then we set up camp and made dinner.  Don’t get too excited when we said “made” dinner.  Translate to; we added boiling water to freeze dried food and ate carrots out of the bag.

While we were eating and looking around 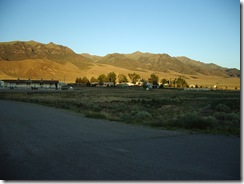 the care takers’ friends showed up, kidded with us for a second then headed back to meet up with him.  Before you know it there on their ATV’s racing the two Border Collies and then headed up the hill behind the place for a little fun.  Other than music that’s the last we heard from them.

Steve walked around the place and took a bunch of photos, then we settled in for an early bed time enjoying the freshening east wind that cooled our camp to the point that sleeping bags were welcomed.

Great spot and great people so far, especially the drivers.  Take a look at the pictures of this leg, it’s fascinating how empty the “the loneliest road in America” is.

Jane, thanks for the ginger chews, they have come in handy & Nancy, the headband sure keeps the drips away (at least from the forehead!)