We left Genoa around 9:15 am to a warm but comfortable day.  The first few little hills seemed to take more energy than was their share,(Annette, thought of you while cruising down Jacks Valley Rd) but we made peace with the slow pace while we kept focused on the realities of our trip;  We had all day to go 60 or 70 miles.  Really no rush is there?

10 or so miles down the road we entered Carson City, NV.  Made a turn or two that lead us to the retail business section.  Here we kept an eye out for a store to provision for the next hop.  Wow!, a super Wal-Mart, who can pass that up!  Steve went in to buy a camel back for the long 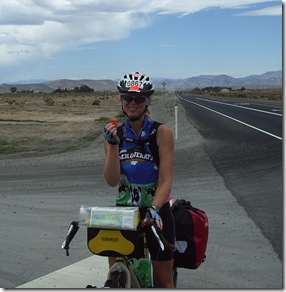 Nevada crossing and Cyndy went in and came out with most of the produce section, her finger tips blanched from the load.  Steve had no choice but to have a little fun with the “bounty” that we had received at Cyndy’s hand.

Having buyers remorse, Steve continued to look at the camel back he had purchased and repeatedly weighed it’s utility against it’s costs.  In the end he decided that a couple of bottles of water would do the job and he could dispense with them at will. So he promptly returned the “way too heavy” pack while Cyndy was busy stuffing away her gathered booty (in the panniers & her face).

After chatting with a lady outside of the store and much messing around we were back on the road and shortly thereafter rejoined route 50 where we started our turn back to the east.  The road had a wonderfully wide bike lane and we picked up a brisk cross wind that buffeted us a bit, but lent some assistance as well.

As we continued down this incredibly straight road, the wind came up and varied from dead behind to quartering providing a wonderful boost to our efforts helping to put the first days’ average speed of 3.5 mph behind us (THANKS VANCE!).  The road was generally slightly down hill (except for the up hills) and we were cruising above 20 mph most of the afternoon.  As we ticked off the miles at a most pleasant rate, we watched one lunch stop after another fly past while we remained fresh and powerful.

We landed at Silver Springs around 1:30.  This was our first real exposure to desert towns.  Here was a small grouping of houses and businesses spouting up out of the sand, some abandoned and others in various states of decay.  There were very few services and no grocery.  This town was originally our stopping point for the day but the conditions were so favorable we just stopped for lunch.  There was a nice family running the Pizza Factory…  or maybe running around the place.  Mom was cooking while her young daughter watched TV and the boy was busy playing with his cars and showing off for us. Eventually the boy invited Steve to play along, which of course he did.  He also helped fill our bottles with ice & water.

Another hour down then back on the bikes.  We hoisted the sails and were blown down the road until we reached Lahontan Reservoir. Here 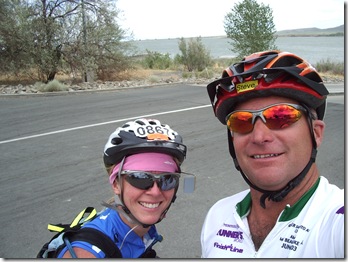 we promptly shed our bike shoes and waded down the boat ramp and into the pleasantly cool waters.  The game warden was at the ramp with his Boston Whaler which gave Steve a chance to talk boats even in the desert.

Although we would have liked to spend the afternoon there, we dried ourselves off and were once again back on the road.  After dodging some sand storms we pedaled into Fallon in a relatively short time and without much adieu, pulled into Best Western.  We wasted no time changing into bathing suits and headed over to the pool. 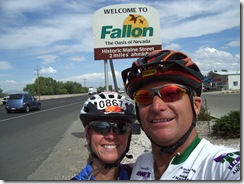 As Steve writes this we are at dinner at Depot Casino and Diner (more like a Sizzler than the Forrest) ignoring Cyndy so he needs to sign off and re-engage.  In reality she is happily eating after 3 days of not much of an appetite.

Thankful today for nice weather, winds at our back, overall large shoulder (except for one stretch where the rumble strip was smack in the middle of OUR lane!), the sight of water & ability to float in it!