A little later start than we expected as we enjoyed the serenity of the this campground’s peaceful high Sierra setting.  Alright so it wasn’t just the setting.  The sleeping mats didn’t hurt, providing that extra bit of comfort that makes dirt camping a pleasure and possibly we were still a bit sore from the previous days climb. 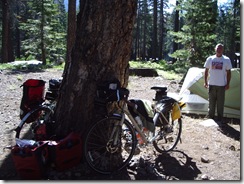 Bottom line, we were in no rush to get going, so we took a bit of time to visit with our hosts as they and we ate our respective breakfasts.

After breakfast our hosts began packing up and were able to beat us out of the park.  We finally stuffed everything back in it’s respective pannier and made our way onto the road.  Just out of the park there was another little hill to climb named Carson Spur, before the descent into Kirkwood. 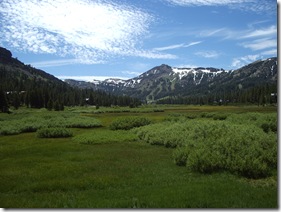 When we arrived in Kirkwood Valley we took a few minutes to enjoy the views and then headed short distance to the Kirkwood Inn & Saloon for lunch.

There were a bunch of Harley riders and others coming and going while we ate outside on the patio.  Given our bicycling clothes and the packed bikes, a number of passers by stopped to ask what we were up to.  We enjoyed sharing our plans with the folks and getting the disbelieving looks.  A few bikers (motorcyclists) took to asking more details and then stood in amazement at the idea.  Can’t say that the whole plan wasn’t just as crazy to us, we have just had more time to reason it though.

Lunch didn’t go down very easy so we finally gave up and rejoined our route.  Caples lake was the next land mark after lunch and it looked inviting, but no, we didn’t jump in which is unusual for us McCormick fish.  The next leg would be our climb to Carson pass, our highest point of the ride so far and where we would encounter riders doing the Death Ride.

As we reached the pass, we couldn’t help but pull into the rest stop to see the Death ride folks…they took second looks at our loaded bikes.  Many where interested in what we were up to.  Our friends Curt and Mike were doing the ride and we hoped to run into them so we hung around for a few minutes then moved on when we couldn’t find them.

On the long descent from Carson Pass we kept one eye on the road and the other on the riders heading up still looking for the guys.  We stopped at the rest stop near the top of Woodford valley and finally found our friends.  So good to see them, our last hugs & hello’s for many miles.

As we coasted down Woodfords Valley and straight through Woodfords into new territory, the excitement from other riders and spectators faded and once again we were the lone bikers.  We didn’t plan our departure to run into this group, but having them there made us feel like we weren’t alone on this trip and helped our transition. 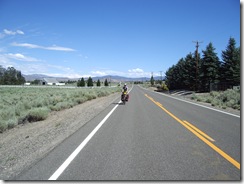 route diverted us off 50 and onto Emigrant Trail & Foothill Rd. which was beautiful.  Mountain range on one side, nice homes, trees and green pastures on the other.  We  had a good view of Kingsbury grade refreshing Cyndy’s memories of her recent experience running in the Reno-Tahoe Odyssey run.  The wind was generally at our back and we enjoyed winding through 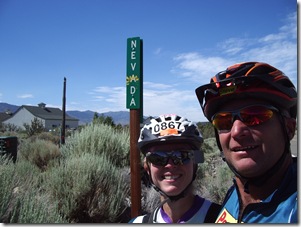 the grasslands and rural homes along the east edge of the Sierra.  We were zooming along looking at all the new stuff and almost missed the state boarder.  It was a small green sign, surely not a size fit to celebrate such an accomplishment of crossing our first state line.

Our cruise down the back roads lead us to Genoa just in time for another snack. (Cyndy feels she is not following her own nutrition advice as well as she should be!).  We ordered up soup and a sandwich and went about eating.  Once again, it didn’t go down willingly so lunch was a bit protracted.   As we rested the wind became very gusty and dark clouds rolled in.  We had experienced the same thing last year doing the Death Ride.   In that case it lead to heavy rain and marble 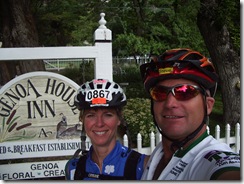 sized hail. Needless to say another 15 miles did not seem all that appealing, so we hightailed it to the Genoa House Inn B&B located right across the street.  Turned out to be a nice place with pleasant owners and the first of many Wi-Fi locations so we could keep up with this blog.

If you come to Genoa, keep in mind that the only restaurant in town is very small and requires reservations, mmmm popcorn for dinner.  Oh and no grocery store.  Not an issue if you have a car, but…  The folks in the next room over offered us some fresh fruit and some cheerful conversation as we sat writing this.  Thanks go out to the generous strangers our trip has already given us.  Hot shower, laundry (in the shower), Comfy bed and plenty of drive to use it.

Cyndy may have forgotten to mention her bike’s nickname, Harriet the Hippo, her chariot to take us to gorgeous mountain views, snow capped peaks, wildflowers & streams.